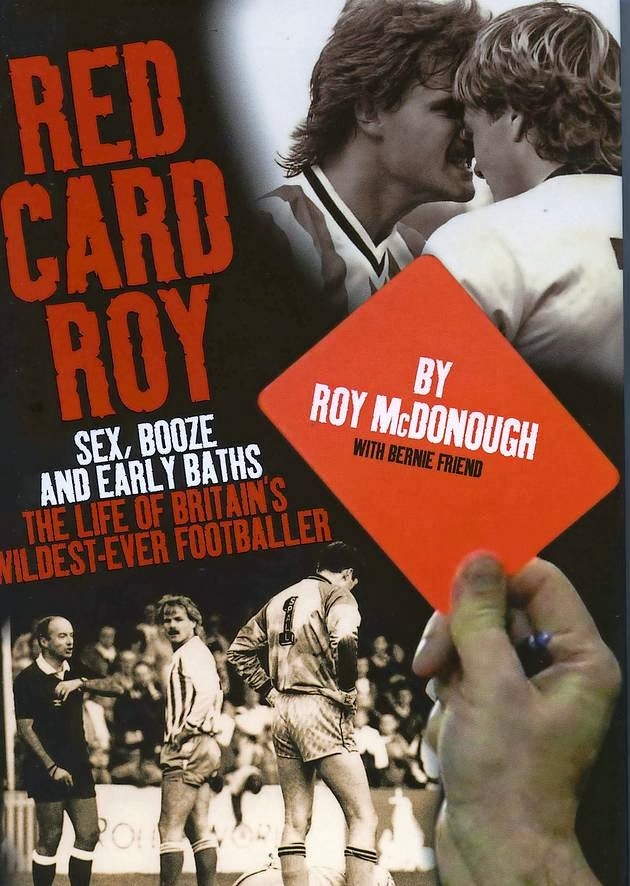 Right, let me tell you about me, Roy McDonough and Sutton United. Stick with this as you wouldn’t have got this review, or Totts addition to the Gandermonium roster of star writers, if it hadn’t been for being forced to haul the memory back fifteen years to try and back up an anecdote I was trying to roll out on the Amber Planet website.

Back in November 1998 Roy was managing Heybridge Swifts. In those days I was rarely out of the Plough and the form was to roll across the road bang on three to clock the Sutton game, hitting the bar at half time before the tunnel gates slammed shut and carrying on afterwards. For some reason that day we sat in the stand, don’t ask why, and the game was wholly unmemorable although I understand that it finished one all. However, one man was determined to liven it up, and collect his record-busting 22nd red card along the way, step forward Mr Roy McDonagh. We will come back to that day later.

A google search of Roy to jog my memory turned up some interesting facts. Not least, that he had written an autobiography and a couple of clicks later through Amazon and a hard back copy for the price of seven quid was delivered to Totter Towers the next day.

If I’m being honest with you, and I will be, the book is all a bit predictable and after the first two hundred pages I was wondering how many more booze ups, blow jobs and black eyes I could take. You probably know the feeling yourself.

This is knock about stuff mind, tracking young Roy’s rise as a kid through West Midlands football before being signed by Geoff Hurst at Chelsea, where he never played a game other than a friendly, before beginning a booze and sex fuelled descent through the lower leagues and eventually the non-league game and his final berth in the managers seat at the Swifts.

Probably the pinnacle of his long and winding career was winning the Conference/FA Trophy double with Colchester, although the event that catapulted him into tabloid headlines was dumping his missus and running off with the groundsmans wife.

Roy recounts the violence with gusto, never shirking to stick the boot in to the namby-pamby modern game, not least his sending off in an FA Cup game after kung-fu kicking Tony Pulis in the chest – an act that should not necessarily be outside the rules of natural justice if you ask me.

The notorious hard men of the day are all taken on and disposed of although Terry Hurlock can’t actually remember the incident in the FA Cup at Brentford when Roy allegedly dragged him to the ground by his bollocks (I asked him) – but then as Tel says all our memories end up getting shot to bits.

I started to think that we were maybe veering out of control on the old actuality with the tale about thirty pints of lager, a bunk up with the barmaid in the club house car park and then merrily driving home in the club-sponsored BMW. Give you the benefit of the doubt there Roy, just in case you decide to come looking for me.

Anyway, the mighty Sutton get three mentions in the book and not a gratuitous sexual reference in sight I am very pleased to be able to report.

The first run out is a cursory reference to Sutton United as part of a list of other non-league “toilets” as McDonough plunges for the first time out of what we know as the old fourth division and into the conference.

More significantly, as the clock winds on to 1993 the book refers to being “humiliated 4-3 at home by non-league Sutton United in the FA Cup” – yes, this is more like it. The mighty Roy McDonough honestly admitting to being humiliated by the U’s, fair play to you son.

Not til the second to final paragraph does possibly the most significant event in Roy’s long career in the game, and the one that ended it, get a full and glorious two pages and its stirring stuff. Sutton v Heybridge at the home of football in 1998.

Roy was at the ref from the off, accusing him of being a homer who had given Sutton 43 fouls to Heybridges two. The row carried on under the stand during half time and fifteen minutes into the second half it all went mental with Roy “spitting lava” from the touchline.

Anyone who was there that day will remember that the ref stopped the game for a full five minutes while McDonough and the officials went at it like the clappers in front of the dug outs. Roy was eventually red carded and sent to the stand where he plonked himself down in front of us.

We had no idea who he was but I remember vividly him turning round to us, incandescent, and spitting “see that wanker of a ref? I would do bird for that cunt and I ain’t fucking joking.” I now count being taken into Red Card Roy’s confidence as one of my finest football memories and quite possibly one of my finest achievements full stop.

But that’s not all, here’s the tirade at the ref that eventually got McDonough the nine month ban and ended his time in the game (parental advisory):

“Listen to me you no good part-time cunt. See this shit little league you ref in? Well you know those dark little December and Jaunuary car parks? Watch your back in them, as I’m coming for you with a baseball bat.”

Roy is incredulous that the FA panel frowned on this verbal intercourse and slung the book at him, and that was that.

One final point, McDonough bought me and my mates beers after that game in the players bar and for that alone I make him one of the game’s long lost legends. Good on yer.