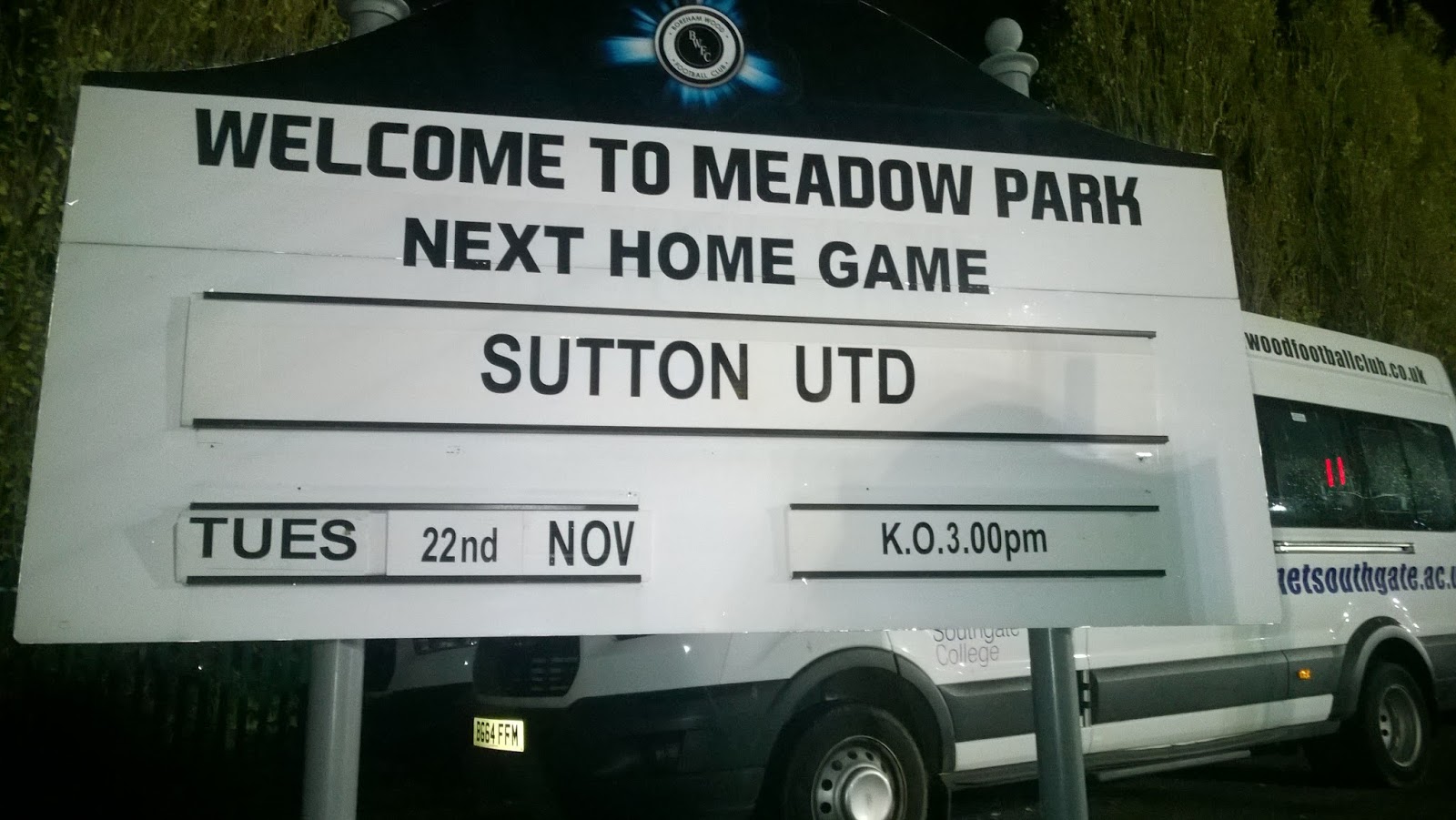 When is a bad day at the office made much worse? When does a simple little away trip to the arse end of London, drive you to the point of near exhaustion? If a midweek trip to Boredom Wood is bad enough, imagine having to spend over five hours trying to escape the place & get home after another poor away defeat.

Luckily for some of us, that wasn’t the case. But enough about that, because we had one of our very own at Gandermonium making that part of the journey. No doubt Totts will have noted down a few naughty expletives about his experiences with the anomaly that is Thameslink and we’ll let you have those later. For the rest of the time you’ve got to deal with me. Sorry!

With the Purple Meanie dying quicker than our play-off chances (the brakes have gone, heater has bloody packed up & it now has a tendency to not start on a Monday morning), my travelling options were limited. The two real choices open to me were to either catch a train or make use of the wonderful services of Mr X and his Italian bit, the Donna Rachele.

As Taz mentioned, there was a little incident involving one of my former cars whilst I was at another midweek Wood game. On that occasion, it was the Donna Rachele that got me home in record time. And as the last time I missed a Sutton game was also a midweek match at Boreham Wood, over 4 years ago which was down to the trains, I wasn’t prepared to let my little run end the same way and I eventually decided on the automobile option. Time to arrange the details with Mr X and his little sort from Turin.

Note: As Tuesday night’s trip was in-n-out quicker than an Juan conquest, this meant that photos were a little light on the ground. Or should I say, mostly of the ground. That or maybe we were protesting at Boreham Wood’s policy of charging the away club to if they want to film it. (even though we don’t charge people to view them). So take a bow, tonight’s blatant bit of filler guest publication:

All I had to do was get to Cheam for a five o’clock departure. Finishing work with a bit of time to spare, I managed to get home for a quick shower before I was back on the road heading towards the club. With the Purple Meanie parked up in Mr X’s neighbourhood and lowering the local house prices, I begun to the trek towards the wilds of Cheam.

Every time I walk through Hancock’s manor, it seems to be ever changing. Well obviously Whitehall manages to still be standing and Lumley Chapel has been around since at least Sean Connery’s stuntman’s youth. They also now have a posh Iceland’s and even the fuckin’ ‘American Way’ appeared to be getting a face lift. That or it had just had a rather eventful weekend!

Meeting up with Mr X we were soon on our way towards the A3 (in spite of the route the sat-nav was trying to send us). Then it was onto the M25 where we encountered the usual shit load of traffic around Heathrow. It can be a little disconcerting when the estimated arrival time first begins to creep up on and then eventually overtake the quarter to eight kick off. To pass the time whilst stationary, we have a little giggle at another confusing argument on the forum before listing to Mr X’s favorite station: Absolute 90’s. I always thought that he was a child of the eighties, I mean he does look like the president of A Flock of Seagulls fan club.

Eventually managing to negotiate the traffic we were finally on our way with some haste. The next problem however is Mr X’s bladder. However despite it being the same size, unlike the famous Chalmers, Mr X can actually hold it for more than five minutes and we find a random McDonald’s where he can relieve himself. Soon after we are into a bit of cross country driving as we decide to head to Boredom via an alternate route and fuck off the 25 as much as possible.

Lets just say that on arrival, I wasn’t too happy handing over £21 for entry and a programme but needs must. And soon enough we were munching on a Boredom burger. Discussing the team line up we saw that there was to be a few changes from Saturday. Still no Dundo in the team line up but there was a start for Dickson & Pompey loaner May had returned.

Surprisingly, Sutton started much brighter than they did on Saturday. They were given a golden opportunity soon enough. It came about when Biamou headed a cross back across the goal. Eastmond had the first bite of the cherry. But his shot was so bad that it actually became a clinical pass to an unmarked Dickson.

With no one around him in acres of space all he had to do was hit the target. But it’s Bignall Dickson I’m afraid and he instead skied the ball over the bar, over us and out of the ground. With a golden opportunity gone wanting like that, we were soon once again conceding away from home. It was pretty much basic stuff once more as Boredom scored with their first real chance.

Giving their fella too much space in the box to receive the cross was probably not the best idea in the world and the resulting shot beat Worner, going in off his near post. Twenty minutes gone and we were 1-0 down having been the better side. The goal did seem to shock us a bit and it was Boredom Wood that were then on top for the rest of the first half. They did have a couple more chances but they never really managed to trouble Worner much.

During the half, I was surprised to hear some vocal home support. Turns out that it was only their Academy players. Perhaps it’s in their contracts to support the first team, you never know. But I’m not sure if it’s in the contract that laser pens are allowed. Either way, the ref had to stop the game at one point and have the culprit escorted out of the ground.

I’ll tell you now, the first 45 mins of the second half were almost completely forgettable. We started with the same line-up and our best chance for most of the match fell to Bignall Dickson who failed to hit the target with a looping header. Then just before the hour May & Biamou were replaced with Gomis & Deacon.

To be fair it took us around seventy minutes to even hit the target and that wasn’t even a proper shot. Down the other end, Worner was rarely troubled as the game petered out. Fitchett became the third sub as he replaced Dickson and what else can we say about the second half? Too many times it was over hit passes or poor control that killed any flow of any kind for us. We also lacked that bit of pace about us to really stretch the game.

As the game approached its end, suddenly there was a flurry of activity at the Boredom Wood end. Playing the basic, yet proven “get it in the mixer” routine, Sutton suddenly found their system. The best chance came about from a Sutton corner. Worner was instrumental in setting up the chance with an overhead kick that was close enough that it resulted in seeing Beckwith have his header saved and then Deacon missing the rebound.

Still, we lost. After the match we finally manage to convince Taz to take a lift and we are also joined by Irish Pete and Southampton Steve. With Steve calling shotgun and jumping in the front, it meant that there was a slightly less tight fit in the back than I’d originally thought there would be. Once again ignoring the advice of Donna’s sat-nav, we headed out the same back way we came into Boredom.

On the M25 we thought we might’ve been in a bit of bother as we passed a rather nasty incident involving a car and a artic. And with more traffic on the horizon, we quickly diverted via Chertsey and joined the A3 further inland. With nothing about we made very good time and soon enough we was back in the borough.

As no one wanted to ride the Purple Meanie, something or other about protecting their lives, I’m dropped off near Mr X’s as he takes everyone else past my house and towards Croydon. Getting home after eleven, I’m greeted with the news that some of the boys have had a right old night of it on the trains. But I’ll leave PRoWS Minister of Transport to fill you in on all that.

Over to you Totts….

I hate Borehamwood and I wasn’t at all surprised that we got beaten in front of handful of home fans supplemented by their youth team with their lazer pens and their half arsed chanting which is apparently part of their intensive academy training scheme.I was pleased to get the fuck out the place and after walking the length of their high street – “North Cheam on steroids” (c‎opyright) – we arrived at the station.With the match finishing at around  half nine the fifty or so Sutton fans were first hit with a spate of cancellations at Borehamwood itself which delayed us getting out for nearly an hour. Eventually we got a train to Blackfriars – a few wise heads peeled off here to get the tube – very fucking wise as it turned out as  the Sutton connecting service was then also cancelled.Along with the Bacon’s, Four Days and a bunch of others we put hope before expectation and decided to stick it out. Eventually after another long delay we got on the last Sutton service out of town. Some expressed relief as we cruised down through Elephant. I wasn’t so sure. I know too much about these GTR tossers.

And so it came to pass. The driver announced “I’ve got some bad news”. You are not kidding there boss. Seems we had got jammed behind yet another broken train at Herne Hill, which closed the entire southern route. All services were cancelled. Everything. We were proper fucked now.So we were dumped out at Loughborough Junction, which was by now locked up and closed. Which is handy.After another wait on an unstaffed platform the train eventually turned round in sidings and trundled us back to Blackfriars. The staff here were great but there were loads of people heading for Gatwick on other cancelled trains who took the priority for cabs.

So who was left right to the end? Yep, the remnants of the Sutton Shoebox Crew who waited nearly two hours for sherbets home, eventually arriving back in Sutton at three fifteen am.We’re from West Sutton and we weren’t going to leave it at that. Our Ministry of Information were on it and if Thameslink thought we were going to quietly into the night, they were very much mistaken. Here’s the communique that got picked up by the press. Remember, don’t ever let these racketeers off the fucking hook.

If we thought it was bad getting done over one nil be Borehamwood we hadn’t reckoned with the journey from hell that the clown car Thameslink operation had in store for us.We worked out we could probably have walked home quicker as the whole nightmare journey home lurched from fiasco to chaos.The staff at Blackfriars were brilliant. It’s not their fault that their employers are a bunch of jokers you wouldn’t trust to run a line on hackney marshes let alone a major rail franchise.

(As seen in the Evening Standard)

Consecutive Vauxhall Conference away matches without a clean sheet: 50!