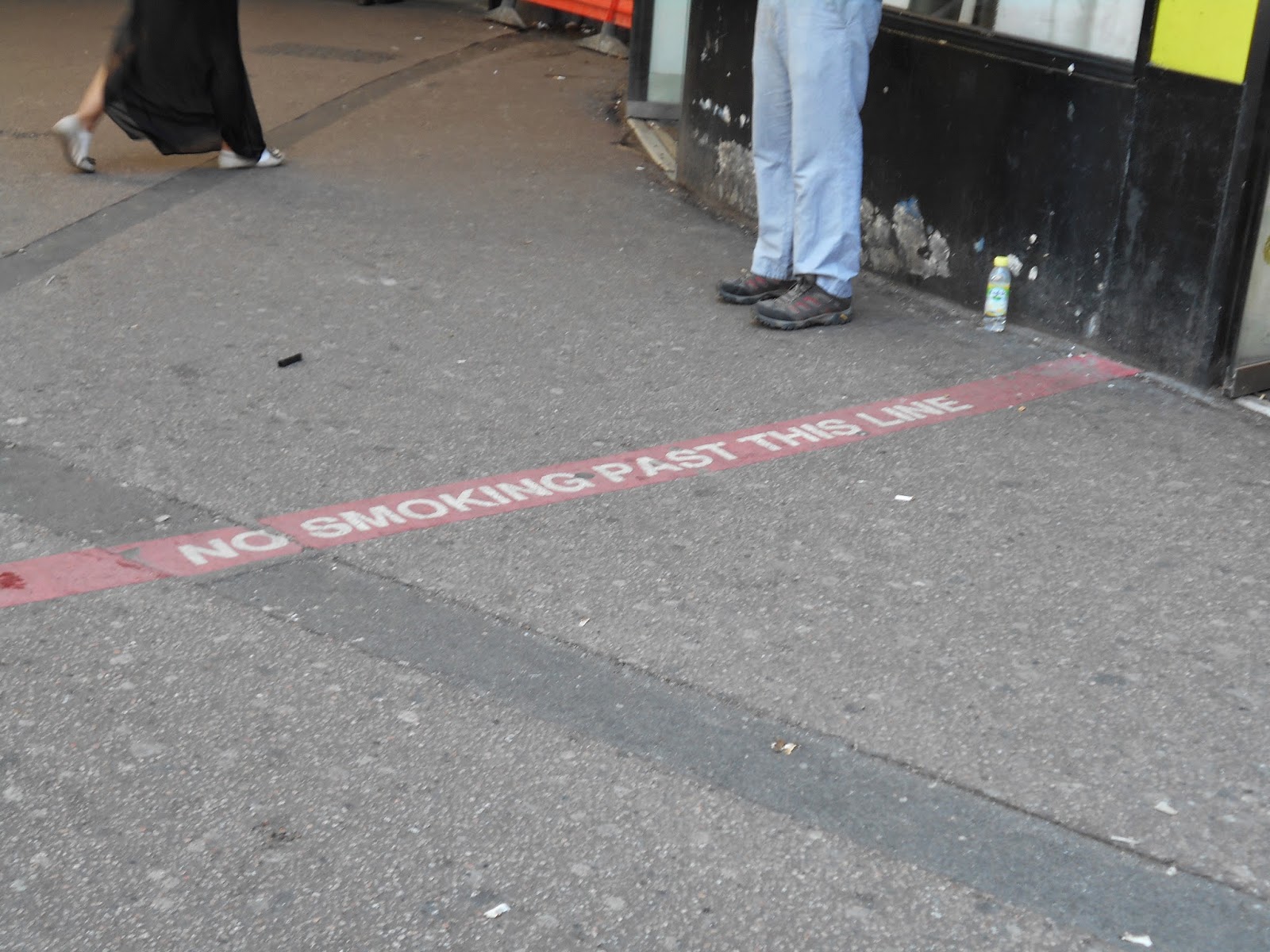 The Firm is on an outing to Kent. Our destination is a little town by the name of Maidstone. I wouldn’t say its like a famous five or secret seven sort of trip because basically its an excuse to get steaming in a foreign land. And you never know there is a slight chance that a game of football might break out as well.

The plan was to get the 0922 from Sutton to Victoria. The two problems that faced me was first the text sent from Taz to my Nokia 105 had only the first few lines in it so I didn’t know that the train wouldn’t stop at Carshalton. The second problem was me not waking up at the right time and was therefore fighting a running battle to make the train on time.

Luckily it was my knight in shinning armour aka Juan Sheet (although come to think of it, he did threaten to punch me in the throat) who managed to sort out what the text was and what everyone was doing. Most of the group met here with only Taz heading to Victoria via another route. For today’s excursion there was going to be nine of us, usually that would mean to group save fours and a single network card job. But what happens? British fuckin’ Rail don’t do the group save thing where you get half price tickets.

£13.50 later we were on the hour long trip to Kent and our first beer of the day. “The Society Rooms” was in fact a ‘Spoons and the closest watering hole to the station. Having a quick one here we headed off to the “Duke of Marlborough” which was the only other pub open before twelve. Both pubs were ok but the next ones were on the next step.

The next pub was “The Style and Winch” where Juan disappeared to buy the Firm its first trophy. The littlest thing he could find. Some heathens daubed it the Surrey Senior Cup, but the rest of us decided that it would be awarded to the Away Dick of the Day. Its a shame I can’t remember who it was as it seemed to be passed around with ease, but I do believe it might be Taz. There was also a strange looking small door that we all failed to work out it purpose. Wellie had joined the group by this point, dismissing the rumours of his change of allegiance.

Then we come to “The Rifle Volunteers” a pub that came straight from the 1970s. I don’t the place had changed at all in 40 years, even the barman! The choice for me was either a can of Blackthorns or a cold Swiss Lager. Well easier said then done because the four pints of lager only took twenty minutes to arrive as the fella behind the jump had to change the barrel. Instead I got to watch Mr X and Dr Bell both try to double one in an extremely long and tedious match of arrows.

Taz then did manage to stack it just after we left, much to the laughter of us. The final pub before the ground was “The White Rabbit” which was basically a massive expensive ember inns type of place that didn’t really want us on the premises. I don’t know if it was the shouting, the swearing or the horseplay but the stares we got were not encouraging. In true Firm style we left and headed in a straight line towards the ground. This meant going over a busy roundabout but you all know what we’re like.

Arriving at the ground we all paid our fivers and grabbed a last minute cider. The strange thing about this ground is that once again you can’t smoke, yet you can drink in the terraces? I’m not surprised that some of the Stones fans tried to warn us about Wealdstone. I never got to see the old ground so I can’t compare it but it was very clean and soulless place. On to the line up:

On to the game and what really happened? To be honest today’s game won’t last in the memory. I really can’t remember anything of note to mention. I even managed to miss Hibbert’s goal as I was in conference with a couple of over zealous stewards. It amazes me that a steward can get away with not looking like one and even wearing a Chelsea top!

The first half was played in the sunshine that the weatherman had failed to get right. I even had to look back at the twitter accounts of those that were present at the game lets face it nothing of note happened. There were a series of corners we had that old friend Worgan comfortabally contained. He even had time to smirk to us over some of the comments from those behind the goal.

At half time some of us headed outside for a smoke, then there another plastic cup of cider to drink. I failed to locate any form of a burger van. I did find a little series of plastic conservatories that housed a club shop, a disused bar and a pie stand. £3 for a pie was on the expensive side but the Chicken & Bacon one had thick pieces of meat inside it. There were also no complaints from Juan and Taz, someone did drop some of their meat in the stand mind you.

The second half was slower than the first and our solitary sub was Spillane coming on the pitch for Cloughie. I was even surprised to hear the announcement of Frannie Collin coming on for Maidstone, I thought he was long gone. Maidstone had most of the action in our half with a good performance by Puddy keeping them at bay. The best save he made was to turn a shot against the post down to his right.

I’m still not convinced that the 3G pitch is the way forward. The run of the green just didn’t seem that natural to me and the bounce wasn’t right. Not that I fear change but we could possibly wait until at least 4G or maybe 5G? Still the team that was put out performed well even though a few of them would not be in the first team line-up starting against Maidenhead.

After the game we decided that it was best to forgo the club bar and head towards any other drinking establishment. Ducking into some alleyway we ended up at a pub called “The Flower Pot”. I can’t say what it was like because I never really took a step in the place as we headed behind the back in the so-called beer garden. It was here that we met a couple of Maidstone fans and a lively chat exchanged between us. I’m not too sure what type of cider I was drinking but the citrus notes in it made it taste like it was lemonade.

The final pub in Maidstone was for me the best one. Named “The Dragoon” it had all the items the Firm needed. There was a bar billiards table around the back for some of our members to get crackin’ on. For me it was the jukebox where the classic Plastic Bertrand hit “Ça plane pour moi” was quickly started.

The surprising factor was that the landlords better half was French and that this song were her favourite. In honour of this we put the song on again and was therefore given some ham sandwiches as a thank you. You see, sometimes the Firm can be good boys! Another cracker on the juke box that this old Duke managed to find was the Brotherhood of Man hit that the boys used to run out to. Yeah you know the one.

With the time fast approaching the leaving hour it was decided to grab some food & drink. the drink was anything we could get our hands on. The food was two large buckets of  Kentucky’s finest minus any gravy of course. This meant I had to go back to the place just to order some gravy. The train journey resulted in mass consumption of chicken and drink. That is also not to say that the gravy was not used by those present.

Arriving at Victoria we quickly jumped on the train to Sutton. Unfortunately the train didn’t go to Carshalton so instead I had to go with the boys to “The Old Bank” instead. And who was in the pub sucking on a pint? None other than Sutton hero Peter Fear! Sharing a drink with him and then heading over to the Spoons for one last drink before jumping in a sherbet for a trip back east, was all I could do by that point.

Well there you have it another booze cruise has ended and everyone is possibly still alive. I still need to ring round to guarantee that fact but the chances are hopeful. Its Aldershot on Tuesday down the lane and maybe Totts will be your host for that one. There is now less than a fortnight before the campaign proper starts and now I can’t wait for it to start.

2 thoughts on “It’s Just Not Natural”