The longest distance to travel to a game this season and everyone is in the Duke’s love mobile. What could possibly go wrong?

Well lets start from the beginning, so somehow by the grace of God I’m managed to get the day off for this trip so I could still keep my hopes up for another perfect season in attendance once again. The first snitch of the day was the fact that I didn’t look at the directions because I been to Weston a few times now. The problem with that was they were all in daylight and not in darkness around cone city…

So for my third continuous blog, the first pick up was going to be our Editor-in-Chief and then Mr X. I left my house around two o’clock so I had plenty of time to fill the old girl will juice and get some Wonga out for the trip, plus I needed some snouts (someone forgot to bring some back from their holiday!). The Editor-in-Chief  was ready in no time and we headed off through Sutton, picking up Mr X at a roundabout because Gander Green Lane was closed for road works.

The problem with driving to Weston is that it takes ages and in fact it is over two and a half hours west of London so we had plenty of time to kill. First we had Duke’s Jukebox shuffle which with me being a Luddite I don’t own anything made by Apple so none of that “i” shit, just a plain old CD player. But as I own several Cd’s I’ve overtime managed to create several different modes of music on different Cd’s. The only problem is that I don’t write what is on the CD on the cover. So instead you have a dozen blank CD-RWs that makes it interesting, especially hitting the beats to Danzig! So step up DJ E-I-C!

Mr X did manage to find in the back my old Surrey Senior Cup trophy that some of you may have seen on Twitter if you follow Gandermonium. We even found an old Sutton United programme from the 2011/12 season against Woking. Yeah you remember that 5-0 drubbing on the opening day? Well Binns scored against us that day and so did Elvis Hammond. But for next hour Mr X tried to get me and the Editor-in-Chief to name the whole squad. You see, how interesting our days can bee without any alcohol! A little stop off at Chieveley Services and off to the west we went. So of the mundane shit we come up with is like the question “Is there anywhere that has The North, The South, The East, The West on a junction?” With the light fading we made it Weston and parked in the Tesco’s car park and headed straight to the local ‘spoons to grab a beer and some grub. 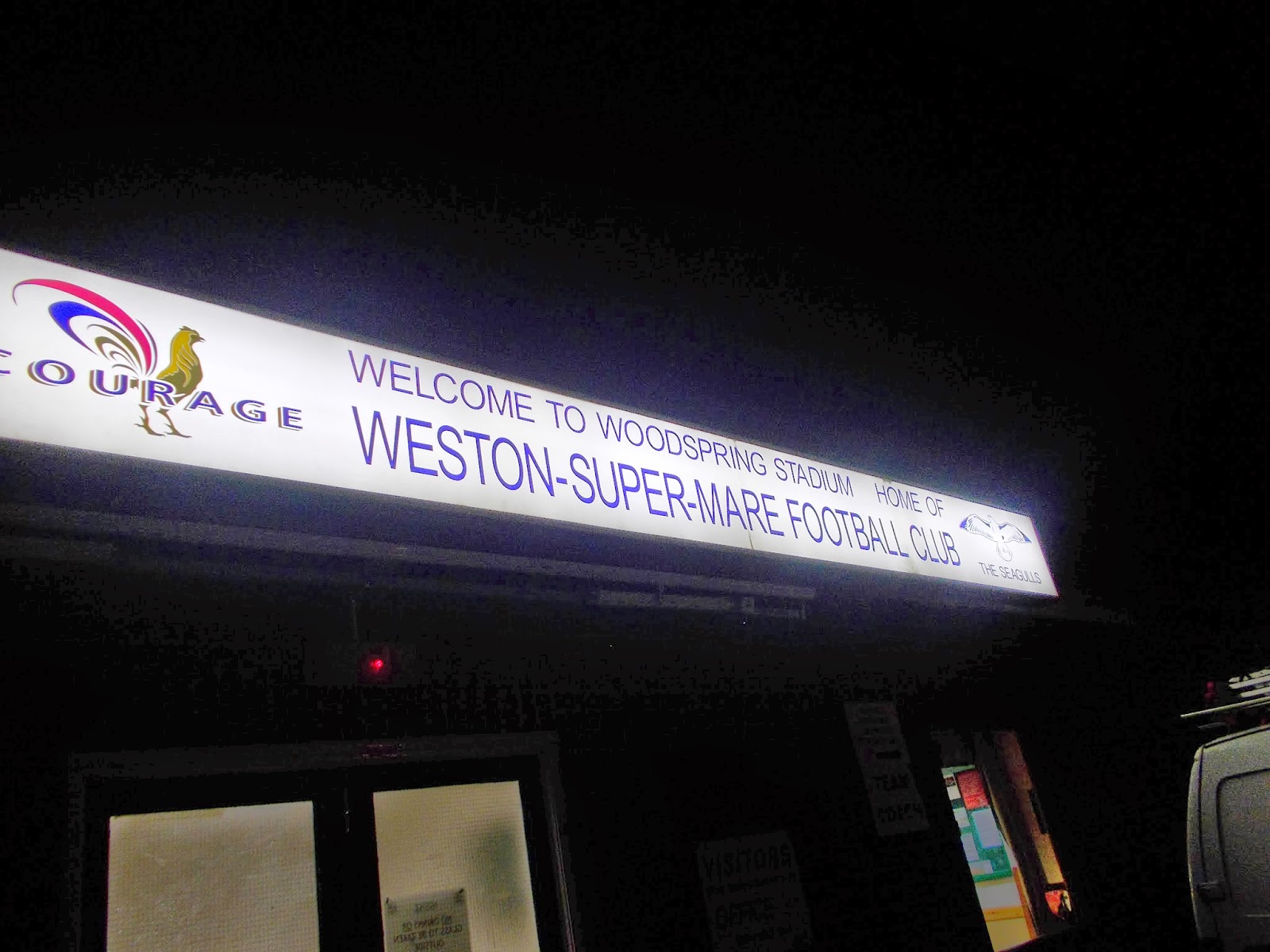 Arriving at the ground we were handed some team sheets and after a quickly pint we headed into the ground. The team we were going to see tonight was:

We choose to shoot at the main stand and off to that end we went, with a cup of tea in hand I might add. Most of the first half saw us once again trying to put pressure on the Weston defence with some tantalising crosses but as the half went on the balls were starting to get loose very much to the frustration of the attacking two. The game came to light in the 35mins when Ali struck a crackin’ ball over to the right side and this was taken down by Scannell who then sent a low and hard cross that is like one of those balls the keeper hates and who was there to tap the ball in? Well it really wasn’t a tap in, because I felt it came off his knee or hand or something as he bundled it into the back of the net, but still it was another goal for Slabber, 1-0. At this point the ref really wasn’t giving us anything and that was not to change in the second half.

The second half was itself a game of two halfs with the U’s trying to get the second goal and kill the game. But not for the first time we let a lead slip and eventually look like we are going to lose by the end of it. Weston managed to equalise around the hour make with a near carbon copy of our goal with a low cross from the left tapped in at the back post. The problem with this goal is the poor positioning of the midfield who eventually left two players running at Telfer at right back. By the end of the game it looked like that restpite on Saturday couldn’t come too soon as we need to settle down a bit.

There was a couple of issues that arose in the second half. The first is the inept twat in black that is meant to referee the game. The fact that he hardly gave us anything in the first half and even the fifty-fifty decisions seemed to go Weston’s way. The second half saw us have three penalty shouts, the first was when Dundo stormed into the box only to be clipped. The ref reckoned that Dundo was “too big” to go down like that. The second shout was when Ali got broad shouldered by a defend while he was going for the ball. That penalty shout was the worst one, and that was the one that got us all twenty five of us behind the goal going. The third shout I couldn’t be sure with Sinclair going down and getting booked for his troubles. The other issue I had with the ref was in the final moments of the match Clough got hacked down as we were trying to get a break after a Weston corner. He did managed to shove this little fella a couple of feet and both got a yellow for that. I did think another ref (Say Coggins or Rock) would’ve sent him off for what he did. After the ref blew his whistle it was nice to see the players and the management show their appreciation to the travelling support.

And so you would that we would travel home back to the bright lights without anything to write about. Well you would be slightly off key with that presumption. That is because the way home is exactly the same way we arrive as follows:-

The first snag in this well though out plan was the fact the amount of road works about. This became evident when at Junction 17 on the M5 we were forced of the motorway and directed to head towards the A38 to get back onto the M5 as this whole stretch was coned off for road works. Finally arriving back at the slip road for the M4 at Junction 15, I may have made a slight detour and stayed on the M5 northbound instead going over to the M4. Well my passengers were quite bemused with that little trick and we all headed off towards Cheltenham slightly confused. To make matters worst, as we were heading north not one single motor viecle was heading south and we soon realised that we would not be able to just turn around at the next junction because once again the whole one side of the M5 was coned off.

What preceded next was what I called “A nice drive through the South Gloucestershire countryside, in the dark”. This happened as we finally left the M5 at junction 14, went through the sleepy village of Falfield and back onto the A38 heading south. This would finally take us back to Junction 15 and to exactly the same spot we were at a mere few minutes before and as Mr X commented “That twenty-two minutes of my life I will never get back!” News had came to us through the medium of Twitter that the Welsh Wizard who going home by train stated that he was delayed a good forty minutes and that was my turn to tell my passengers that they could easily have got the train to. Back on the M4 I tried to make a bit of time back by putting my pedal to the metal and even though the M4 went from three lane into one several times, the most important thing was that we were heading home.

As some of us are getting older the ability to “hold it in” gets harder, and as we approached Reading services to comments were to nearly sink us. The first was from Mr X who need a boys room break said “Ah Services, This is the last one before we get home” and then the Editor-in-Chief piped up “Yeah, might as well, its been a clear run”. So I headed off the motorway into Reading services, I can tell you at half eleven at night the place is dead, but a cheeky snout and a little piddle we were back on our way. arriving at where the M4 meets the M25 my biggest worry was like the trip to Bath a fortnight ago there would be variable speed limits. As our luck would have it there were no speed limits and I breath a sigh of relief. Now you know my luck and as soon as I thought nothing else could go wrong, it fuckin’ did. The first matrix we saw was to announce that the A12 was closed from the M25. That’s fine we thought the A12 is what you take to Chelmsford. A couple of signs later we saw the words “A21 closed from Junction 5”. The first reaction was to confirm that was the A21 not the A217, and then a debate was created as to where that was (I was right it leads to Hastings). The next matrix was the killer “A3 shut at junction”. Yeah that’s right the one junction I wanted was out of  action so instead we had to depart at Junction nine and go through Astead and Epsom to get home.

The final story that I am going to bore you with is the suicidal fox squads out on the road. Not one or two but three times I had some suicidal fox trying to stick his self on my bumper. The third one sticks in my mind. As we were booming over the little hill on the Cheam road into my headlights was the fattest most slowest beast you could ever see, he looked like he was eating on the remains of his half brother’s second cousin. And then just sauntered over to the side of the road. Somehow I didn’t hit none of the little bleeders ergo I’m a failed fox murderer. Not too sure what is happened this weekend, but be rest assured the Gandermonium boys will be at some game somewhere and will no doubt be consume one or two half shandy’s along the way.

That reminds me today I brought that seminal 1992 hit Nazi shoot ’em up video game “Wolfenstein 3D” on my Xbox 360 for 84p. Happy hunting.

One thought on “You Sir are a Failed Fox Murderer”