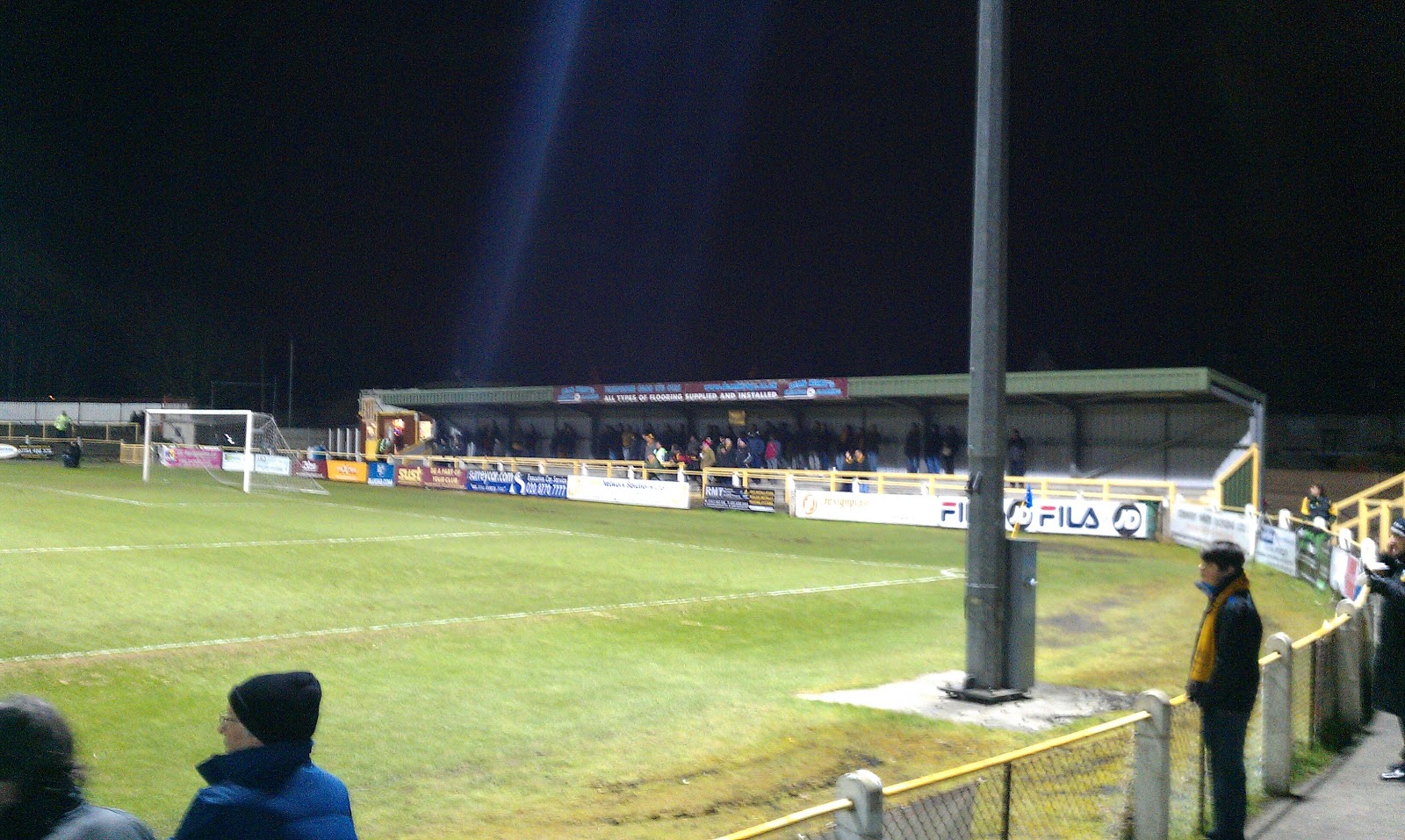 Once more unto the breach, dear friends, once more. And another frustrating night down the Lane ends in defeat.

Well this is it my last week off from work, in fact I go back on Friday when most of you will no doubt be off. And trust me, since I have been off, I haven’t once got up before 0600hrs and I reckon I might struggle come the end of the week! I look back now, with a cigarette and a cup of tea, at the games that I have witnessed over this period the stats really say it all.

Please note, I of course did not include our game in the ever so important SSC in the above stats. So it hasn’t really been the best month for me to have off, football wise, but hey ho onwards and upwards as they say. No idea who ‘they’ are, so lets crack on with tonight’s affair.

There was a change of personnel in my car tonight, as my usual pick up Juan, had clearly sharpened a few too many pencils throughout the day and felt ‘too tired’ to attend the game (I think he knew how hard tonight’s blog was going to be!). I take it he doesn’t have one of them automatic sharpeners on his desk? So instead I had to whistle over to Hackbridge and instead pick up the Firm leader who was making a rare appearance for a Tuesday night game.

Arriving just before kick off, we nestled through the side of the main stand just in time to see the players walk out and a look of the ground indicated that there probably wasn’t going to be many people about for this one, I suppose many had became England fans for the night! Losers.

The actual game was, well, like being jumped on by Big Daddy and Giant Haystacks, two disappointing kicks in the teeth! The first being slightly the team at the start and the second the twat in black ruining the rest of the game.

The game started in the manner you don’t want happening as within the first five minutes we were a goal down as little McLaggon tore U’s a new arsehole down the right of the park. joined by a familiar face at the Rec End we saw how the McLaggon  show got rolling and his first goal came by cut in on Rents and with several other Weston players unmarked in the box slotted the ball past Lovers in goal. and it was only after this that the U’s began to come awake a create some possession and press up the pitch with several crosses coming without any end product.

Then came McLaggon second goal of the night when somehow, as I didn’t see the build up he managed to get behind the back four and canter into the box, where in near enough the same spot of his first goal with only the keeper to beat guided the ball into the same place as his previous effort. Two goals down without reply on 20mins and the thought was by some that this could turn into another long night!

I was amazed like some of you when once again the opposition no. 2 was what only can be described as a waste of space, began to start time wasting on the touchline after only 25mins. this of course had the ref giving him a talking to, only for him to throw the ball up the line, Stuart heads it out, and again the no. 2 starts to waste time. And again the ref has a word with him after just speaking to him 60 seconds earlier!

Sutton’s best chance of the half was to come when later on another twisty run by Hank saw him create some space on the by line, and for once the cross was of a decent height and pace for it to be attacked, the only problem was with only Beauts on the goal line surrounded by three or four Weston lads it would have have to be the last one just in front of Harry to nick the ball before him and guild it behind the goal. We even had time to mess up a free kick right at the death by instead of slowing the game down and taking a shot from 25yrds out we try and play it and lose the ball straight away, luckily the ref blow up to save some red faces.

A quick drink at half time was just what the doctor ordered and the hot topic was the incompetence of the ref ‘s performance was the topic of debate in the bar. If only we knew what was about to unfold in the second half!

And on to the final half which resulted in two more goals and more cards shown then on my own birthday. The hope was that if the lads had been given a encouraging talk at half time and we were able to nick a early goal we might be able to salvage something out of this game. How wrong were we, because no one took into account how easy it would be for the Weston players to con the ref something rotten.

I took my place in the old Shoebox, as the dust is yet to settle from a couple of weeks ago and that did give me a different view for the game. And bloody hell, I thought I was meant to be the wing nut! For some reason the Weston players not content with time wasting like they did in the first half, decided to moan and scream for every decision be it right or wrong and the game descended into a stop start affair that never really got going.

The fact that the ref managed to produce seven yellows and two reds in a game that hardly was of the aggressive type is a point that has to be made Dundo’s booking in particular I found found embarrassing. Because as Craig goes to attack the ball with his foot waist high the defender sees what he is about to and turns his body into the foot of Dundo, screams before he is touch a goes down like a sack of potatoes. Once he sees that the yellow card has been produced he get up like nothing had happened and carries on with the game. There is no justice in football sometimes!

Trevor Sinclair’s first goal for the club was one of the only exceptions on the night when finally one of our crosses actually hit the target man and Sinclair’s header had the keeper beat, and the feeling that we might be able to steal something from this game got all our hopes up. Of course this had to of happened after the sending offs of Beauts and Naby Diallo who both clashed with each other in the middle of the park. Personally I would have gave both of them a yellow, but then again I would be a very lenient ref of the old days mentality, but the ref gave them both reds, now these days you have to have the 22 man group hug that follows these incidents. And we were not disappointed, even their no. 4, after being sent off had to be escorted of the pitch and this followed a bit of handbags, but nothing of note and I have seen more trouble down the local Derby & Joan club I’ll have you know!

After Baxter put the board up showing at least 6mins of added time, this was the cue for one fruit full attack by the lads who whilst playing with ten men, and deciding on three attack the back saw Sinclair try and shot through about six Weston boys on for it to fall to McLaggon who unopposed by not one Sutton player in our own half simply took the ball all the way home into the back of the net for his hat-trick. and that was that full time 3-1 to Weston-Super-Mare.

Booking of the day would have to go to hat trick man McLaggon who after clashing with a defender for the ball, this caused all the Weston players to scream and shout. Even their no. 2 ran 60yrds to have a pop at the linesman only for the ref to produce a yellow to McLaggon for his troubles. I think he must of said something to the ref, because even the physio got involved with the ref on that decision. And we all had a little giggle in the shoebox in between us shouting expletives at the twat no.2. Justice at last!

Post match thoughts in the bar were that if it wasn’t for the slow start, we might not have been 1-0 down and the game might have been different. Saying that with that ref I couldn’t see any different outcome but you never know. I did think that the reserve lads put in a good account of themselves because it was a different game to the one at Billericay and a difference between a team battling for a place in the play-offs and a team struggling near the foot of the table. All credit to the lads, they gave it a go and once again it wasn’t to be but you won’t be able to stop me from coming that easily!

And a special mention to old Albert who after speaking to me and a couple of others outside did give us all a reason to smile with his colourful language. It was even nice to see the editor-in-chief of the blog (not only to finally give him his bloody “Pacific” back!) make new friends with total strangers, who was that fella in the bar?

And there you have it, another disappointing Tuesday night home blog (I really do dislike writing these ones, not pissed enough!) which recently with the boys performances are getting to be very alike to one another. But being one to never lose the faith in the team I soldier on, looking forward to the end of the season and the exciting plans that are afoot.

So that is the end of that one then. Dover away Saturday and the first time for me to actually be able to do the booze cruise down there as it’s usually a Bank Holiday Monday when I’m fuckin’ working, plus we might have another virgin with us if things pan out right. So hopefully it will be the high speed link and a few too many pints! I have also been roped into doing a film review at some point so keep your ears to the ground for that one, no doubt it will be something I dislike. But you know me, despite this I will mange to do any review in a just, unbiased and professional manner.

3 thoughts on “You’re Having a Mare Ref!”