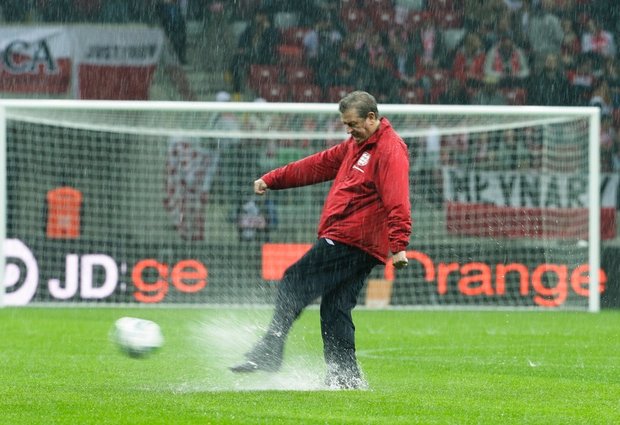 Well, this is fun. We start the site up just in time for some typically seasonal weather to leave us sat twiddling our thumbs without any football to talk cack about.

So, there’s nothing else for it. I’ll have to break out one of the myriad of old reports I’ve got gathering dust to bore the shit out of you keep you amused.

Topically, I’ve managed to dig out Gandermonium’s first EVER FA Trophy report from the very first incarnation of the site. It covers our 3rd Round trip down to Weymouth in 1999 (in what turned out to be a Isthmian title winning season no less) and the wonderful time a minibus of drunken knobheads had at a place where we usually get sod all…..

Yawn. Another trip to the South West results in another shite game with the U’s on the wrong end of the scoreline.

An early morning departure and a nice leisurely saunter down to the coast courtesy of Drunken Arse Coaches Inc with Col behind the wheel is only interrupted by an opening time stop at the Firkin in Chichester for a medicinal opening time drinky-poos.

Having found what seems to be the only B&B open in the town and all for the princely sum of £13 a head, a couple of local hostelries are put to good use before a cold wind greets the intrepid drunks travellers at the home of the Terras.

Nko Ekoku is straight back into the side after 3 months out and Mark Watson is restored to front line duties. Dacky isn’t present. Cup tied we presume.

The first 20 minutes or so is nothing to write home about, with Weymouth having slightly the better of it, forcing Howells into a couple of smart saves. Our hosts have quite clearly watched us closely prior to this meeting, as their main tactic involves banging long balls over our two centre backs (Riley & Berry) and getting the two nippy little forwards to run chase after them. This seems to be working, with Berry & Riley turning about as quickly as the QE2 in heavy chop, it’s only the woeful finishing of the two home forwards that keeps the scores level.

Then with five minutes to the interval and we blow our best chance of the match. Salako’s pass is aimed at Naz on the edge of the box, the defender moves to cut it out but only succeeds in falling over the ball. Our little French wizard is on it like a shot and is in on goal with only the keeper to beat. The ‘keeper goes down early and we hold our breath, waiting for Naz to either dink the ball over the stranded goalie or stroll round him and walk it into the net. He does neither. Instead he somehow construes to hit the ‘keeper square in the chest from the distance of 2 yards and the chance is gone.

The second period starts badly. Ten minutes in and a Sutton attack breaks down and the now expected punt over the centre of our defence sees West race clear and finally making up for all those missed chances in the first half, slipping the ball past Howells. The U’s are now in big trouble and running out of ideas. Nko appears to be our best hope and he starts to give the Weymouth No 2 a particularly torrid second half skipping past him almost every time he gets the ball (or just running through him on the odd occasion matey manages to stand his ground) but the cross is either defended, or there is simply no-one there to meet it. The fullback’s afternoon is made slightly better when Nko is withdrawn 15 minutes from time to end his torture. He also somehow manages to be win the Man of the Match award! With the tannoy announcement being met with loud derision from the thoroughly amused away support.

Only one side looks like scoring now and it’s Weymouth. Time and again the two forwards waste chance after chance, with our plodding rearguard struggling to keep track. But, 1-0 it stays and we’re out of the Trophy at an early stage AGAIN to another decidedly average side. Ho Hum. So, not for the first time this season, it’s down to the piss up to rescue an awful afternoon. And it does!

A ridiculous night of drinking ensues and ends with a final binge in a boozer on the harbour. Quality beer, live music and a balcony from which the assembled drunks can loudly call for Black Sabbath numbers from the band, which they of course ignore although with gracious good humour.

The final act involves Chalmers in a shopping trolley, with a traffic cone on his head getting pushed home by Col. His lift home is interrupted at the end of the high street though by the arrival of two of Dorset’s finest in a patrol car.

In a show of great solidarity, we scatter and dive over the nearby sea wall onto the beach and leave them to their fate, while we peer over the top of the wall giggling like twats.

“Is that your trolley sir?”

“And the traffic cone?”

“And the gentleman in the trolley wearing the cone on his head?”

“Righto. Better take the trolley back where you found it eh?”

And with that, Col tips the trolley to one side unceremoniously dumping Chalmers onto the cold hard pavement, does an about turn and slowly weaves his way back towards the High Street.

Satisfied his little chat has done the job, the copper winds his window up and departs to no doubt start another circuit of the town centre looking for twats like us behaving idiotically. And once out of sight, Col instantly ditches his trolley down the nearest alley and returns to find us all now sat atop the sea wall, still giggling away.

“Lotsh of fuckin’ help yoush lot was eh!” he slurs.

Next year Wembley. Next year!