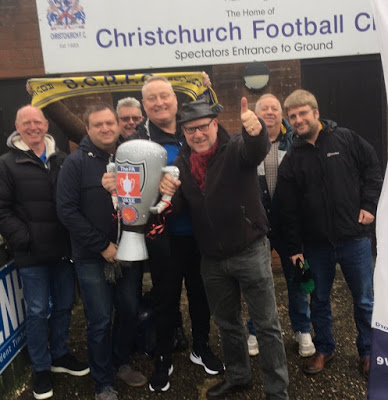 Everyone loves a good old cup run.  It gets the blood pumping and when it involves trips to football grounds you wouldn’t normally get to or think of visiting it can also broaden your horizons as well. And as my horizons are currently my front room and my back yard, here’s my post-season take on some FA Vase exploits from this season that sparked off some of the kind of old school hi jinks at the lower rungs of the senior game that are light years away from the greed-fuelled, phoney VAR controversy of the Premier League. You’re welcome.

I’m a lucky man.  I live in Gander Green Lane and when I’m not patrolling the streets of what we know as the the Peoples Republic of West Sutton (the PROWS) or following Sutton United away I have the option of watching my other local side, Sutton Common Rovers. And I’ve been doing just that ever since they took up the ground share at GGL once we put the old Fred Gee down. As a result I’ve got to meet some proper football people who throw their heart and soul into the beautiful game.  They are proud to be part of our PROWS family and we are proud to have them.

Early on this season we first dipped our toes in the warm, but unfamiliar waters of the FA Vase when a number of us took in the home game against Snodland – or the Snodland Snorters as we christened them. We like a nickname round here almost as much as we like a pint! SCR cruised to victory but we then missed a few games due to expected fixture clashes with the U’s, until that is, the last 32 draw paired the club with Christchurch away at the heart of the Kingdom of Wessex where myths, legends, magic and ghoulies are rife to this day.

SCR Gaffer Daz sent through a call to PROWS HQ, as with Sutton United out of the FA Trophy and a free weekend on the calendar, could I rustle up some support for a coach trip deep into the heart of the New Forest.  Say no more chief. The usual suspects all answered the call – Keepo, Bacon, DB, Railroad Bob, Big Malcolm P and we also got a yes from Dancing Marcus, more on him later, the Wing Commander, the High Commissioner and Torchy.  Even veteran groundhopper One Eyed Jason lensed in on the coup. We’d be mob handed and no mistake.

This was the well drilled army that assembled with some of the other SCR hardcore in the GGL car park with our tenners in hand to pass over to Shazza while Chairman Alan took the roll call. Leaving at ten thirty we breezed down the M3 and were pulling off at Ringwood after a couple of hours and bowling up to the Christchurch ground. The tidy little set up is close to Bournemouth Airport and I believe it was, or maybe still is, the airport’s sports and social club.

We needn’t have worried about the pub situation. The club house at Christchurch FC is superb, large, well appointed with big screen tellies with the footy on, ahh football, remember those days, and a great selection of ales including a Pearl Stout that was a gift from the gods. So we settled in for a few pre-match scoops and the usual arsing about. SCR chairman Alan Salmon was done up in a yellow wig for the occasion and after nearly fifty years since he had managed him as a player for Centre 21, the forerunner of SCR, Al confirmed that Dirty Barry was the best shot stopper he had ever had on his team sheet! Fucking hell! Some were in tears at this bombshell revelation. And not in the way you’d expect either.

As the players arrived Daz and the boys popped in to thank us for making the trip down and we all shook hands and slapped each other’s backs and our little gang of PROWS hardliners were well and truly in the swim as we headed out to the turnstiles with our six notes entry clutched in our grubby hands. I had the raging hunger about me and with cup fever gripping this part of Hampshire like a set of mole grips on yer nuts I had to wait a while for my slipper and cup of splosh but luckily in full view of the pitch as the action go underway.

And what a belting cup tie this turned out to be. SCR nailing an early lead and the game racing backwards and forwards up the pitch with no quarter given. Up in the stand the match was being filmed by some local fella with a toy-town box of special effects who hadn’t accounted for the close proximity of SCR legend Alan Salmon whose own fruity commentary cut through the dreary monotone of the home operation like a knife through butter.  Eg: “Fucking hell ref.  He can’t fucking do that. Went right through the fucking back of him. For fucks sake. Get a fucking grip of these animals.”

And that’s the printable bit. Which is really saying something where this publication is concerned.

Anyway, we weren’t in the stand, we were right on the edge of the woods in the “Forest End” and being a long way from the club facilities, a comfort break could instead be taken by a journey across the plank over a stream and into the trees. And as we had availed ourselves freely of the cheap clubhouse booze, it was cold and most of us are men of a certain age, this was a journey that would need to be made with some frequency.

It was on one such expedition that an incident occurred that will send a shiver down your spine.  Something that put the willies up me and the rest of the crew and which has been spoken of in hushed tones, late at night, ever since. As DB and Keepo were taking a slash and the rest of us shouted encouragement, a face was spotted emerging from the foliage high above them.  That face, wreathed in twigs and leaves, briefly stared down at them from its elevated position and clocked their activities before melting back into the dense woods. Probably unimpressed.

“Did you see that face up in the trees?  Jesus Christ, what the fuck was that?”
“Dunno, maybe just some local pervert?”
“Do you think it might have been a ranger or someone who manages the forest?”
“Fuck off, that face was other worldly, like nothing I’ve ever seen before.  I don’t even think it was human.  I’ve read about shit like this but I’ve never seen it with my own eyes.”

And so the legend of the New Forest Yeti was born.

As the first half drew to a close we hot footed it back to the bar and that gave us time to take in some of the “decoration” that litters the Christchurch ground.  That includes a magic garden, some flower pots adorned with plastic ducks and a random bird table behind one of the goals.  Some might call this stuff quirky. I call it fucking deranged.  Big Malcolm P however, a man who himself loves a mad prop at the football, thought it was wonderful.  I also spotted a BBC Radio Solent OB truck and offered them a half time interview, but they balked at the fee. Fuck em. Their loss. Let’s have a nice pint instead.

Back out after the HT break, this time at the relative safety of the Clubhouse End with it’s indoor khazis and lack of forest creatures, the game continued in the same vein as the darkness set in and we got the Yellows, Yellows and OOH AAH SCR chants going as the lads secured a deserved two nil lead and it looked like we were cruising to victory. But Christchurch weren’t done, pulling one back and keeping us on edge right to the final whistle when we all had a proper old celebration with an inflatable vase Malcolm had acquired and the celebrations carried on in the clubhouse with the players and we were chuffed to hand Ollie Twum his MOTM award before more singing and hi jinks on the coach back to the PROWS which included a handy stop off at Fleet services heading north.  Which is my favourite motorway service station as it goes.

Back in the PROWS we piled into the SUFC bar full of beer and bonhomie, surprising the staff who had no doubt been looking forward to a quiet night that didn’t involve listening to tales of Yetis, bird tables and derring do from a bunch of drunks pumping coins into the jukebox for a barrage of seventies disco hits.  D.I.S.C.R proving strangely popular.  A great time was had by all, well by us anyway.

After all that excitement and with the U’s again on a week off, we were all tuned in to the draw for the next round which threw up Bitton away and after consulting the maps clocked that this was another easy strike out from the Republic, this time on the outskirts of Bristol.  For this one, the Christchurch crew were joined by Bev The Vegan, Mrs Yeti and Vampire Vince as we hoped to keep the dream alive. The Bitton ground is one of those that looks like it started life as a roped off section of the village green, but it’s a tidy set up and the clubhouse/village hall had booze and food at good prices and which we were soon piling in.

They even had a vintage turnstile to keep me happy and the old Bath/Bristol Railway runs along the back of the ground and although the steam trains don’t come out til Easter, Railroad Bob was chuffed to see an old diesel shunter go back and forth. But the game would be dominated by the latest storm winds to blow in across our nation. The conditions weren’t great but SCR had a couple of decent chances before we went one down to a worldly free kick and that set the tone for the game.

The travelling support did our best to get behind the team but a second goal after we were carved open at the back put us right under the pump. The emergence of the Beast of Bitton – a close relation of the New Forest Yeti – from amongst the undergrowth bolstered our spirits. And fair play to the SCR lads for keeping going, our hopes briefly raised when a Pagey penno came back after being rammed against the bar and was bundled home.  But it wasn’t to be and Bitton closed the game out in what was a fair result in the end and they must now be gutted that having progressed onwards since to the semi finals that the competition is now probably going to be chalked off for this year. I wish them well for the future.

We had a couple of scoops back in the bar after before boarding the coach and despite the result we lifted our spirits with a good old sing song, mainly celebrating the legend that is Dirty Barry and the amorous advances of one of the Bitton players mums. And that was that really.  Thanks to all the brilliant people who run Sutton Common Rovers for inviting us on board their adventure and for laying on the travel and the laughs.  Next season, the Vase is ours! We will be back.  At some point.

Until then, up the PROWS!