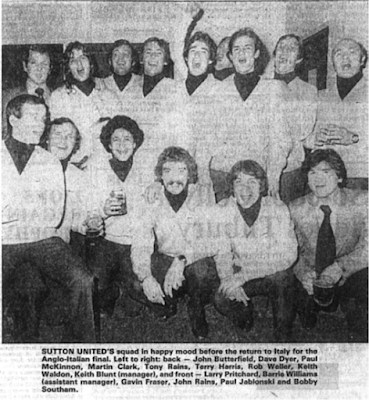 Welcome back. So, after all the thespianism to get you in the mood, the second instalment of my musings from way back when actually concentrates on the journey and the match itself that decided the Anglo-Italian Cup final in 1979. And if you’re still awake at the end of this one, have a gold star and consider that’s
another couple of hours few minutes of Coronavirus isolation you have got through. The difference in
boredom thresholds will be minimal.

Fortunately, none of those bad things occurred and a decent cup of PG
was had by those in need. In fact the worst trouble we got into was at one point the guard ticking us off for having our
stocking feet on the seats. A bit harsh when you consider the British trait of
filthy footwear on tube seats being a rather common occurrence. In some ways, a
proportion of our society really are fucking arseholes.
Into Switzerland, we passed Basel’s football ground, a venue at which I would
see Fulham qualify for the knockout stages of the Europa League some 31 years
later. The Alps approached before we then headed underground to travel literally through the
iconic mountains. For the life of me, I cannot recall the name of the tunnel
but we were underneath thousands of tonnes of rock for quite some time. An amazing
feat of engineering, but since they have built the Large Hadron Collider and the
world’s longest road and rail tunnel in the interim, I guess it was just par for the Swiss.
Emerging the other side, we eventually crawled over the
border into northern Italy, now in darkness. I was a naïve seventeen year old
and both I and Coro Man had some sense of foreboding at this point (can you imagine if we were doing this trip now!!). Italy was to us, at that time, full of potential evils. What irrational
knobheads.
Arriving at Milan Centrale we had another hour’s wait before the next
leg of an eight hour overnight journey to Rome. And this wasn’t going to be quite so comfortable. April 25th, the day of the final itself, was also Liberation Day in
Italy and all roads led to Rome. Liberation Day marks the fall of Mussolini and
the end of Nazi occupation and it seemed that the whole of the country was
getting on our overnight service to the capital.
For a good four plus hours we stood in the corridor along
with the natives, one even managed to squeeze into the luggage rack for a kip. Probably
a circus contortionist in his spare time. Having been travelling now for 24 hours, it was hardly what any of us was expecting or needed. Fortunately the train
half emptied at Firenze and some valuable shut-eye was finally and gleefully taken.
Into Rome and a very quick turn round here to buy a return ticket to
Chieti (which was not covered by our £40 outlay to our friends at Transalpino) and then yet another four
hour journey across the more rural parts of mid-Italy where a new game was
born to pass the time. It was called “Spot the Hovel”, because some of the dwellings we saw out of the window along the way looked not much more than stone crofts used for sheltering animals. Five of us
had managed to claim one compartment, with a single surly looking Italian our travelling
companion. He probably wasn’t surly at all, but just tired and to be honest I shouldn’t
think his description of us bedraggled, stinking Brits would have been any more polite. And
he’d have a had point.
We finally arrived into Chieti around mid-day and soon all were taking
lunch in a nearby restaurant. Well, all but me who, with his aversion to anything foreign,
stood outside tucking into the last of my stack of ham and spring onion sarnies. Lovely. Still, I wasn’t completely ignorant to the ways of the locals, dining as I was, alfresco, as they say in these parts.
The ground was a twenty minute walk from the station and we
arrived to applause from those Sutton fans who had taken the shorter, easier and more expensive flight option. The
team soon rocked up and we all applauded them off their coach. The ground, the ‘Guido Angelini’, was a large oval with one covered area down the touchline. The back
drop was impressive, with green hills with some grand looking villas perched precariously and
dotted around amongst them.
Now, I hate carnivals, processions and the like so the pre-match
pageantry out on the pitch pretty much passed me by. I was only there for one thing after all, the football, and the rest,
as far as I was concerned was just nonsense. People who are attracted to the
Lord Mayor’s Show or similar, to me, must have some void in their life. I know
charities do well out of such events but that doesn’t stop me thinking “what a
load of old shit”. No doubt such people would argue my fifty year obsession with SUFC is no
different. And, to be fair, they probably have a point. Still, fuck ‘em.
So, I suppose I ought to talk about the match at some stage? Even the Gandermonium regulars usually manage that much.
Sutton United FC: Collyer, T
Rains, Jablonski, J Rains, Dyer, Fraser (Stephens), Walden, Pritchard,
McKinnon, Harris (Joyce), Southam


The FA had allowed Sutton to wear the full England kit for
the occasion – a nice touch. Now, anyone who knows their football history will be
aware of the outcome, but I’ll run through it one more time for the less well educated. Following a fine first half where late goals from Bobby
Southam and John Rains gave U’s a deserved two goal advantage, the hosts roared on by a near 8,000 crowd pushed hard after the break, scored one but couldn’t force extra-time.
The Swiss ref officiating (of course he was Swiss!) had an odd afternoon. He gave Sutton everything in the first half,
including turning down a blatant penalty for the hosts in the first minute, before favouring them heavily after the break. One thing about Chieti was they never
really resorted to some of the worst of Italian football of that era that we’d seen in the qualifying rounds. What some might call the “dark
arts” or others just street thuggery, where an off the ball punch or kick to an
opponent was fine and dandy. It took me a long time thereafter to respect
Italian football and the fact that one Anglo-Italian purposely tried to break
my leg one Sunday afternoon a few years later certainly added to that lack of
appreciation. Fucking tosser.
So, now for my not so big reveal. From the start of the trip I
had this massive gut feeling that Sutton would win. To me it was inevitable,
although I kept it quiet until after the match. When it comes to Sutton I am
normally glass half empty, so I was not surprised by the victory but ecstatic all
the same. I have only experienced that feeling so strongly on one other
occasion and that came true too, although a far more sombre occasion.
When the ref blew for time we of course went radio rental.
Thirty of us surrounded by hoards of locals who had turned up expecting their
heroes to whip these English pretenders. With no bubbly on offer, Welly poured some Scotch he just so happened to have about his person into
the trophy as a substitute and the unknowing John Rains took a couple of big gulps before realising!
Despite the celebrations, we had to shoot off pretty quick after the match to catch the train home, mainly to
ensure we were back in time for the local derby against Carshalton. We had no bother making it, but learned later
that one U’s fan, travelling solo, got a kicking on the way back to the station. The
way home was going to be a long one, but there would at least be enough time to ponder, contemplate and
absorb that we had made a tremendous effort to watch SUFC make football
history.
On the way back we learnt from a large, well-dressed, Swiss
gent that Nottingham Forest had won 1-0 in Cologne to reach the European Cup
Final. There they would defeat Malmo in the final and that would be the destination
for the following season for U’s then victorious manager, Keith Blunt.
The cheese and onion sarnies also made their final appearance on the
way back. Over three days since they had seen the inside of fridge; they were a dripping,
stinking mess by now. They tasted wonderful, although I believe some of my fellow
travellers didn’t quite appreciate them as much. The journey home back through Europe was far more
comfortable, with no packed trains or commuters.
Our arrival back in Blighty coincided with the morning rush
hour and as “we” were on strike for the Friday afternoon I opted to go straight
into work. To say I was unkempt was an under-statement. No proper wash for four
days, bum fluff doing its upmost to form a five o’clock shadow on my chin- more ‘just
before mid-day’ in my case – and greasy, lank hair was what greeted the big boss’s
immaculately turned out secretary when I bowled in. The look of disgust I got from her was well earned. Any
attempts to rectify the situation in the gents’ bogs failed miserably and the
four hours I “worked” naturally crawled by. An anti-climactic end to a truly wonderful
week! I popped into my old school that afternoon and the girlfriend was rather
cool with me and a few days later I was dumped for a younger (by a year) model.
Thus I learned how a massive high could be rapidly pulled down into the depths without
the need for any chemicals stimulus.
Still, not many non-league fans can boast they have seen their team
win a one-off cup final on foreign soil. Even fewer can do so following a train
journey of epic proportions. Seven of us can say we did and should be rightly
proud. The memories have certainly stayed with us for many a year.
It would be remiss of me not to mention how brilliantly the train
network across Europe worked back then, as any slight hiccup would have had
severe ramifications for us in making the game. Not sure I would have trusted BR back then or
indeed any of the current private operators forced upon us now to have
performed so well over such a distance.
Since that wonderful afternoon in April 1979, I have seen
Sutton defeat Coventry in the FA Cup, reach the fifth round of that same competition and host
Arsenal in it. Five league titles have been won and countless other cups too along the way but this
trip, this magnificent historic victory, will always be my number one favourite memory.
It was the culmination of a month of excitement and change for me.
If I could go back, I’d of course do it all again but hopefully with a
little bit more nous than I had back then, which wouldn’t be that hard because at that point I had fuck all.

Huge thanks to Frakey for this! And also an equally huge thank you to Welly “I’ve never been called a responsible adult before” Waite for supplying the majority of the pictures on this opus. So, fancy featuring on the pages of this absolute shit show yourself? Drop us a line. We’re far from a closed shop and if you’ve got something interesting to tell, read a football book you want to review or even fancy taking the plunge headlong down the rabbit hole and doing a match blog, let us know.