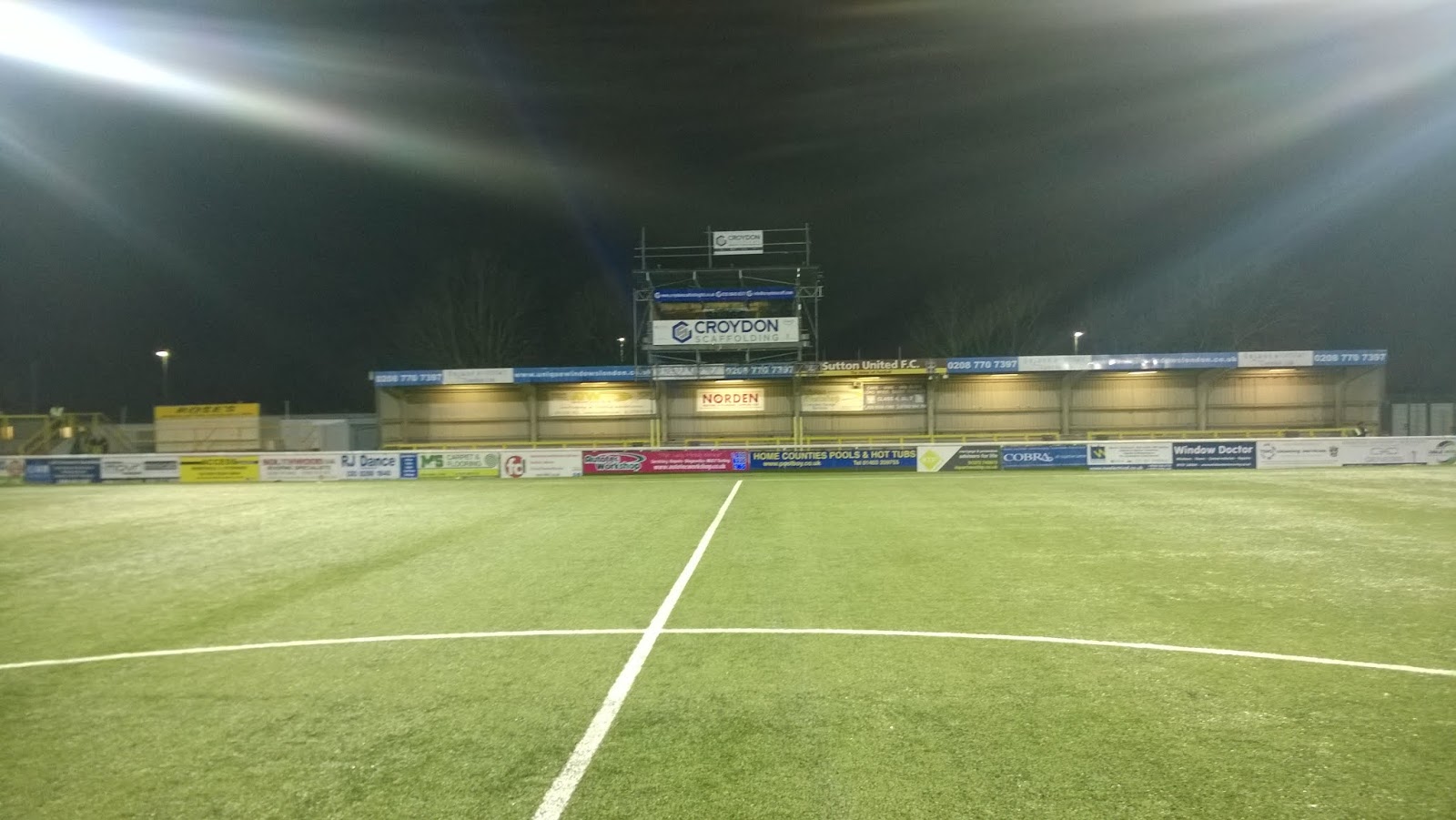 By Thor’s Hammer! That result was not expected by me in the slightest. And going by the reaction inside the ‘Secret Gandermonium What’s Up Thingy’, neither did anyone else for that matter. But this is football and more importantly, this is Sutton United. And not some knock off form of ‘Championship Manager 97/98’. So we all know how they can be at times like these.

Well wasn’t Saturday a bit shite? Football-wise, it was about as exciting as one of Chalmers stories. It might’ve only been a defeat by the solitary goal, but we could’ve shipped in a few more if it wasn’t for a spot of the old lady luck and the woodwork. At least Saturday night was a touch better with the Firm going the whole nine yards and even bringing out some of the WAGs for a rare occasion. Well, a race night down the club at least. And as you can tell, The Duchess thoroughly enjoyed herself. I think.

Enough of Race Nights and romance though. Back to the football in hand, and Sutton haven’t got time to mope around feelin’ sorry for themselves as we welcome the quick return of the boys from Underhill The Hive. And after their little run in the FA Cup, Barnet are now behind on their matches and are still languishing down the lower reaches of the table, so they’ll be looking for points. And you all know how we’ve been this season (Just this season? – Ed) at home against teams from near the bottom.

So the Firm Leader had once again offered his services to give us a lift down the Lane and who was I to turn that rare sign of generosity down? Taking him up on that offer, all I had to do was be ready by the time he wanted me to be. Obviously I wasn’t, but he waited nonetheless. What a nice fella he can be. More importantly, the team news begun to filter through by this point. And blimey, only two recognised defenders make the starting 11? Where the fuck were the rest? Turns out that our injury list is getting fuller than a bishop’s ball-bags. Still it gave us all a bit of fun playing “What the fuck is the back four out of that lot?” before kick off.

Pulling up to the Executive, VIP Gandermonium parking space and rolling it a tad too far over, we begin our walk to the ground. Arriving onto Gander Green Lane we were confronted by several kids running and screaming down the road. Wearing the usual style of black clothing and Burberry, plus one of them has what looked like a tartan handbag about his person. Must be that gender neutral style these days among the youth that I keep hearing about. Don’t know who they were and what they were doing, but no doubt it’ll all come out at some point. Sadly for us, there was no time to grab a cheeky pint before the start, so we headed straight to The Shoebox.

Barnet started very much the stronger team with a series of corners and many of us thought this was going to be a long night. But it wasn’t to last as with such an enforced attacking side on the pitch, Sutton would claim a lot of possession. Probably the best of the early chances fell to Deacon but his shot in the box was blocked near the goal line, but from where I was it was probably heading just wide of the goal anyway.

Midway through the first half and we got a look of what the man in the middle was all about. Kenny “It’s Tuesday” Davis was the first to get himself into the book. Rightly so, as he was late to the ball and and caught the player. But his victim’s reaction to the foul was also worthy of a booking as he jumped straight up and got right into his face. Next thing you know there is a little spat of handbags as plenty of players get involved. Still, it livened things up a bit.

The rest of the half saw a few chances for both. Barnet had a double as Worner was called into action, but pulled off a good save. Unfortunately for him it fell to an unmarked player (surprise, surprise). Somehow though his shot missed the goal completely and hit the foot of the net support behind. At the other end, Toure did all the hard work as he capitalised on a Barnet mistake. Running into the box, he leaves Sweeney on his fat arse as he turns him and having gone past the keeper and with only two players on the line. He goes for power option instead of placement and it smashes off  the bar. Bollocks!

With no point before kick off, we manage to squeeze in a quick libation, it’s back onto the Shoebox once again with the second half soon to begin. With no changes being made, Sutton carried on where they left off in the first half. Unfortunately so did the man in the middle. Sutton’s first real chance came with a bit of football you’d expect from Sutton. A Barnet free kick is played into the box. It’s cleared and comes out to the sweeping Barnet  player. He manages to get it trapped under his feet and is charged down by Eastmond. The ball comes free and then he marauds 50 yards down the pitch. Now Easty ain’t the quickest and he’s being caught by the chasing pack with every yard, but all he has to do is get it past the keeper. Unfortunately for him, the fella gets a tiny hand on his shot and it rolls inches wide of the post.

The chances became a little few and far between after this, but the man in the middles shenanigans didn’t. Ayunga gets booked for reacting to a foul not seen by the officials but witnessed by everyone else in GGL. After Kearney had replaced Williams the game became a scrap in the middle of the park. Collins was booked after taking down a fella near the dug outs. But like the previous Lazarus, he rises almost before he’s even hit the floor to demonstrate his feelings and get a booking for his troubles.

Unless it’s in the highlights (otherwise you won’t see) but the continuous strange both team bookings continued until the end. The last one was going to be when Toure got into a hugging competition with a fella underneath the pylon. A kiss might’ve been exchanged, but you won’t know. The final moments of the match saw Barnet have a last chance, but the header went inches away and Sutton came away with a point.

After the game and the usual post-match attempts at becoming the ‘clubman of the year’, it’s off to the bar. Checkin’ some of the other results on the night, we saw that Wrexham has quietly climbed to the top of the non-league pyramid after a victory at Boring Wood. That came out of nowhere. But there is still only ten points covering the top eight, so it’s anyone’s at the moment.

It’s not long enough before The Firm Leader calls time on this adventure and with Taz in tow, we begin to make tracks towards the ‘Executive Gandemonium Parking Space’ and off to wherever it is we’re going. We did all seem to be in agreement that what we’d just witnessed was most definitely a point gained instead of two points dropped. Especially considering how poor we were on the Saturday before and the fact we had two wingers as full backs.

Sutton now move onto another East London trip this Saturday. For it’s time to once again visit the most expensive ground in the league. Although if the rumours are to be believed, it may not be any more. Then again, there are also other rumours doing the rounds that the Daggers have banned home supporters from sharing the stand behind the goal with us due to ‘police intelligence’, a contradiction in terms right there fella. But Dagenham (and Redbridge)  are currently very low in the form guide, and with our injury crisis, Saturday could be a challenge both for the teams and our good selves. But, you never know. Anyway, I’m now off to re-watch Lee Bowyer & Kieron Dyer have their ‘disagreement’ on YouTube. Enjoy!