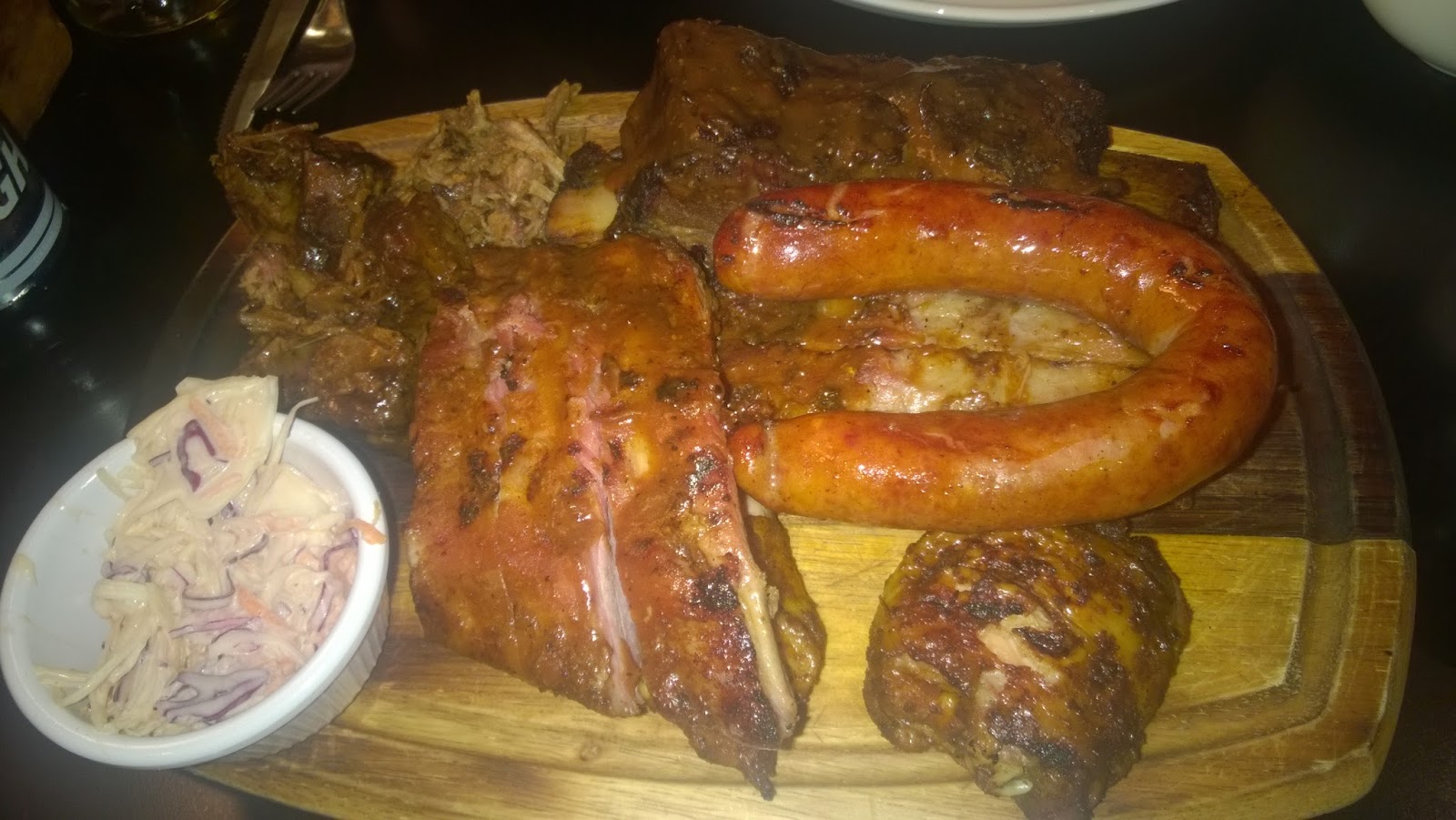 So, after the huge disappointment of our Surrey Senior Cup exit (not that I’m bitter about it in any way) it was time to turn our attention back to the possibility of trying to catch Gravesend Ebbsfleet in the league. With ten games to go, the points different is currently 12pts. The simple requirement for us is to win every game. Doddle.

With my lengthy time off from work fast approaching its conclusion, it was time for me and the other Gandermonium bum (Taz) to take in the delights of a trip to Lambeth. After attempting a trip to the Imperial War Museum shortly before its re-designing, it was time for a return. All in all, I would have to say that I was slightly disappointed with what was done. The usual shit was ok but the Second World War material has been radically reduced. Afterwards, we shifted up to Tower Hill and a Taz favourite in Bodeans. Where a little spot of lunch was ordered…

With the Firm Leader taking charge of this south coast offensive, he had already spent what seemed like months trying to organise our transport. He’d eventually decided on going for the 0908hrs train from Clapham Junction. With a cost of £15, it seemed cheaper than the £19 it was costing Taz and some others coming from Sutton. Of course we won’t mention the fact that I had to purchase a £8 travel card to get to bloody Clapham in the first place.

Jumping on the 0831hrs from Carshalton, most of the gang was already on it. Getting up to Clapham and joining up with The Firm Leader and his friend, we jumped on the train and begun our slow descent south. Luckily for us we managed to commandeer some seats and settled down to the usual drivel that get the tuts and the sighs from other passengers.

The top two comments were both involving one of our female members in the shape of Loffers. As you may or may not be aware, Loffers is very vocal about her love for the job, working for Her Majesty’s Government. I’m not too sure how we came across the fact, but apparently it seems that Loffers works in that little know department the Ministry of BJs, aka MOBJ.

Also, referring back to a certain individual known to the Firm as Brian. Apparently he is very helpful if you want to make Frothy Coffee. Personally I drink Tea, but if you want your coffee frothy, then you’re going to have to talk to Brian. If you don’t know how to grab hold of him, then ask to Loffers. She doesn’t mind explaining it!

Arriving in Portsmouth just after eleven, we headed straight to the nearest pub. Inside the Wetherspoons was another known Gandermonium associate, as Coops was propping up the bar. As you may be aware, the other week it took Mr X several hours to relieve himself. Luckily for us (and him) we managed to find out what it took to help him out that time. It seems apparently that all is required is the presence of Dr Bell. Yep, just the mere sight of him makes Mr X open up his bowels.

Next pub on the list was the local brewhouse. The third beer of the day down and we begun to make plans to get to the ferry. It turned out that the best option for us was to get the 1300hrs down to the harbour. With only a couple of minutes (four to be specific) needed on the train, we decided to forgo the usual crate of Bud.

Arriving at the harbour you are right next to the jetty to get the ferry. As is always the case, we managed to get split up as those that got tickets with cash got on the boat, but those that used cards were just a fraction too late & had to wait for the next one. Also, £3.30 for a ticket with the clear instruction on saying “PLEASE RETAIN TICKET FOR RETURN JOURNEY”? Bit steep.

Over in Gosport we headed to the closest pub that was the “Castle Tavern”. Some of the fellas decided to go for as spot of local fish whilst the rest went for a sandwich. The question soon arose about what were going to do next. Squeeze in another pub? Or get sherbets to the ground. Eventually we came to a compromise by having another beer in the Castle to mull it over before heading to the ground.

I didn’t realise actually how far the ground is from the ferry but we eventually made it to Privett Park shortly before kick off. £13 pound entrance fee later and we were once again taking our spot with the wrong end supporters near the bar.

Standing next to Robbo, we began to discuss something or other on Twatter when I heard a laugh that sounded like a missed sitter. Unbeknown to me it was in fact a penalty miss for the home side! Asking some of the boys about what happened garnered plenty of different response. One said it was Downer, Another Amankwaah and someone said it was Eastmond. Turns out it was Beckwith with a weak coming together. The penalty apparently was a total waste of time as the fella hit it wide of even the phone pylon next to the goal.

On the quarter hour mark we lost our first man when Downer was forced off with a hip injury, John was the sub replacing him. Minutes later and Sutton were in the lead. After failing to clear a throw in in true Sutton-style, the ball fell to Stearn, who used the outside of the boot to curl the ball into the top left hand corner. 1-0! Robbo soon commented “What a strike by Rossi, put that in your fuckin’ blog!” So there you go, you animal beater!

Fitchett & Eastmond both had chances to extend our lead but were both guilty in failing to convert one on ones. Fitchett was soon to leave the field of play as he pulled up with a hamstring injury. He was replaced by Spence. This meant that there was a slight change around in our shape to keep the attacking force strong enough.

With five minutes left of the first half, Sutton got the second vital goal. Thanks to the Firm Leader’s fishing of the Gosport number nine, he provided the assist for Wishart to score. His header from a Sutton corner was so good, that it guided the ball straight to Wishart and he volleyed the ball straight back into the net. 2-0!

Second half and the fishing continued at the expense of the Gosport left back. He did eventually manage a bite but after that seemed to refuse to return to the front post near to us. The second half seemed to have a little less pace in it and eventually Bailey was brought on for Stearn. There were several chances for Sutton to put the game to bed.

Slabber & Burge probably has the best two, and if it wasn’t for some last ditch defending or poor finishing the result would’ve been different. Beckwith was to pick a last minute booking that means he’s up for a ban in a couple of weeks. Think Wishart is still one card away as well with the cut off after the Whitehawk match on Bank Holiday Monday. Be good sunshine, be good!

Talking of Wishart, the highlight of the second half was when he was clear through into the box, his shot was wide of the mark, hitting the side netting. This wasn’t funny but what is, was because we think we know why he missed it. Next to us, just before he pulled the trigger, was the scream “Go on Tom!”. Looking to the right we saw it was none other than the same fella that gets Cooper & Collins mixed up. Namely Taz. Not sure how you can confuse Tom Bolarinwa & Dan Wishart, but Taz does. (Fuck off! – Ed)

After the match we left the ground and headed to the Gypsy Queen. Some of the Firm played pool as others looked at the other results in the league. As you can see from the table, it’s basically as you were. That now means Monday’s game at Wealdstone has gone up a notch. After finishing off our pints we headed on further down the road.

With time fast approaching we had to decide about getting out of dodge. We soon arranged for cabs at a quarter past seven to take us to the ferry from the next pub. A booze run was required before the cabs arrived and others tried to forage for some food. Jumping in the second cab meant that we would be cutting it fine as the ferry was approaching the jetty just as we turned up.

Luckily as we had the original tickets we were ready to walk straight on. Unfortunately, for one of our group, they had thrown their ticket away on the outbound journey. This meant he had to run back up the gangway to buy another ticket. He did manage to make it on time but not before a little spot of running was involved. Despite the result of an online poll about this incident, it wasn’t Taz this time.

The journey back was the usual drunken rambling that have now been consigned to history. Remember that plenty of booze had been purchased and drunk. As always Mr X spent plenty of the whip on various bottles and cans. He even grabbed me three bottles of Weston’s 8.2% ABV Cider. After saying goodbye to Steve “Benny from Crossroads” Grant at Clapham, we waited for the next train back to Sutton. Eventually we made it back to base camp and had the usual O’Neill’s till two o’clock experience.

Wealdstone Away on Monday to follow, After that it’s the flight down to Cornwall for Truro away before the Easter Weekend is completed with the visit of Whitehawk to the Home of Football. If we were to go for promotion this year, then every game matters from now until the end of the season. So stay tuned!