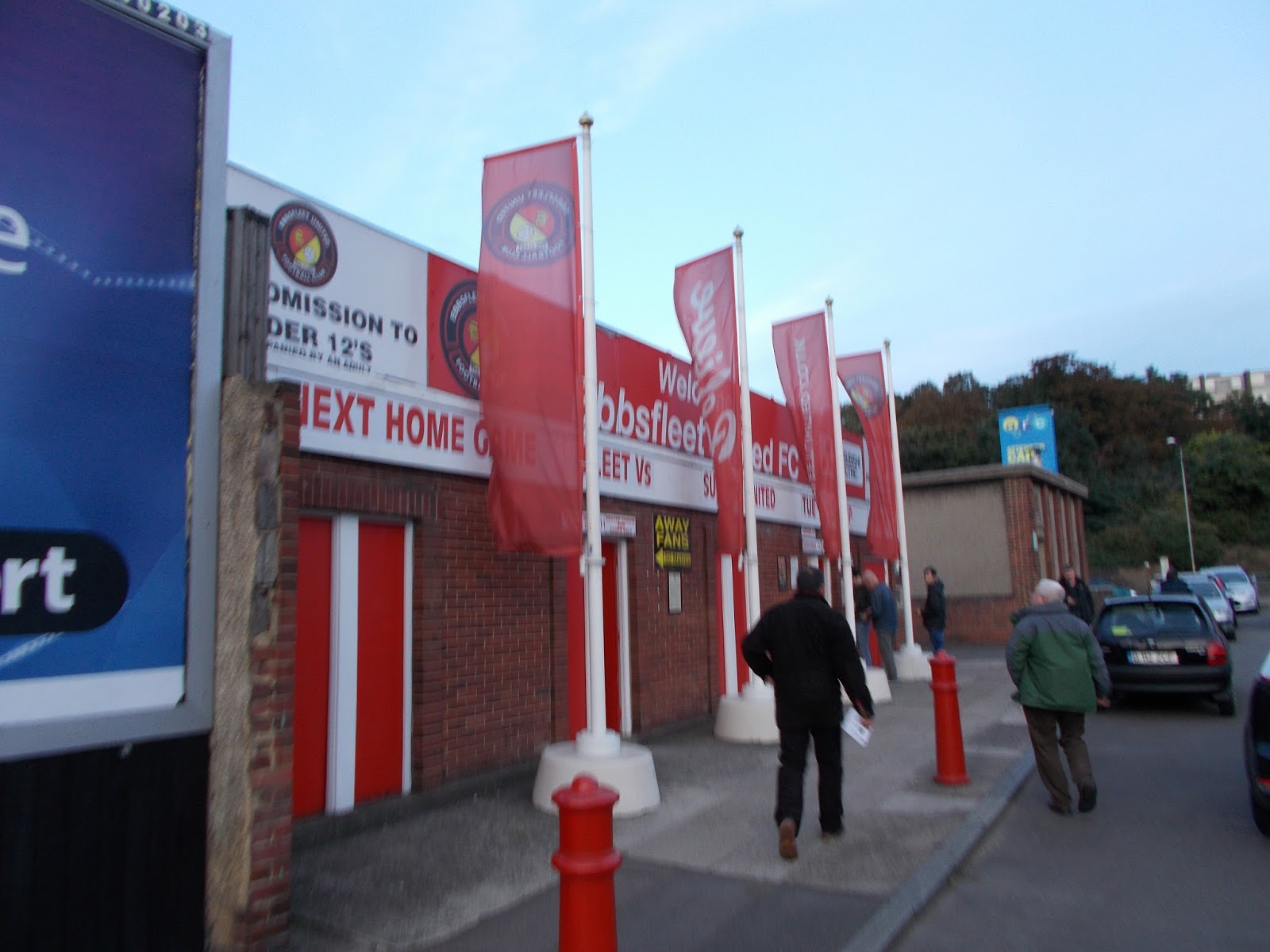 Just for Totts, but Fuck a Duck! What sort of a night was that then? Well you would think that just for once, we might be able to have 90mins without the twat in black making some big calls that change the way the game is going but wouldn’t you know it, our luck wasn’t in tonight.

The draw for the FA Cup was
made on Monday. Stortford away no less. Yeah you heard, fackin’ Stortford away. Not only didn’t we get a plum of an away trip, somewhere new to spread the proverbial Gandermonium seed around. We also didn’t get a home tie to fill the
coffers somewhat. And it’s bloody Stortford away into the bargain.

Anyway, back to league matters
for a while. After somehow ending one unbeaten run on Saturday, it was left to
us to face the remaining undefeated side in the division. Namely Gravesend
& Northfleet Ebbsfleet (I really must try to remember that they’ve changed
their name to a small hamlet outside Ramsgate).

The car journey was to take
around an hour and twenty minutes, so there was plenty of time to chew the fat on the way down.
I mean not literally, that’s a sort of thing Juan would do. If it was a fat bird’s
arse. Most of the worry was that it would turn out like last year and be
another kick in the bollocks performance wise.

Arriving near the new Ebbsfleet
Valley development, we saw what seemed to a gigantic sign in the middle of the
roundabout. Not too sure what that is going to become but I reckon it won’t be
surrounded with the words Gravesend and Northfleet. He! He! Get it?

Whilst we made the trip towards
the ground, we decided to forgo the cost of paying in the station car park and
try our luck down a side street or something. Suddenly, Mr X spotted what must
be one of the closest parking space ever to a turnstile, spawny git!

Eleven squid to get in (not bad), and
then a quick chat with some of the other boys who’d made the journey east. The
rest of our lot were coming in by train, so other than a mishap again with the
BTP there were due to arrive just before kick-off.

As I was getting a couple cups of rosie lee (at £1.20 some 30p cheaper than ours) for me and the man of mystery, it appeared he was in conversation with Our Lord Dos. Apparently he wanted us to make some noise from behind the goal. Unfortunately for us, this is one of those grounds that has those wrong-end supporters. I could never understand why you would want to stand in the same place at this level but they have the type of people that do. I mean, who wants to watch their side fuckin’ defend? Even worse, there is an annoying fackin’ drum to boot as well!

From the off you could hear the idiots to the left of us. I still can’t work out why they were singing ‘away’ songs (everywhere you go? What. Like Ebbsfleet? Tits), but I doubt they did either. On the pitch both teams tried to figure each other out with probing long balls.

Sutton’s best chance (Until the 86th minute), was soon upon us when new boy Eastmond lashed at the ball from the middle of the Fleet half. The resulting lob sailed over the keeper and then dipped, just to bump off the bar and away to safety. After this it was a very even game, with possession at 50-50. The only difference was where Fleet would be a bit stronger on chances.

Our man Worner made three excellent saves to keep the scores level. Two were to his top right and one to his left. Even Beckwith was called upon to clear one off the line as Worner was beaten at the near post. After this there was also a Fleet goal disallowed for a clear offside in the build up.

With the scores level, we took residence in the open end (like most supporters do, stand at the end your team is shooting. Take note lads!). We also spotted a Ramsgate flag down the side of the ground. Strange lot these Kent people sometimes.

The first talking point (and reason for the blog title) will be the booking for the keeper, Even though I doubt it will be mentioned by the Fleet official match report. After Collins was pushed into the keeper just before he tried to release the ball, the keeper is clearly seen given Collins a back-hander to the fizzog. Not a proper manly one, but a back-hander all the same. Obviously, the ref bottles it and books both players. Fine I thought to myself, just remain consistent in your decisions now fella.

It took about ten minutes from here for Fleet to get the decisive goal. After a blatant foul on Eastmond in the middle of the park and no whistle from our mate in the middle, the resulting run by the Fleet player was not checked and he cut the ball back to none other than Jordan ‘Always scores against Sutton’ bleedin’ Parkes, who curled the ball into the top right corner. To be honest it was a tidy goal. The jarzy little sod.

With a flurry of subs – Stearn, Fleetwood & Bolarinwa replacing McAllister, Fichett & Wishart for us – by both teams, it began to feel like the game was going nowhere. Fleet didn’t really seem to go for the killer blow and Sutton’s final ball when we got up their end failed to live up to expectations.

The final five minutes then went to pot. Firstly we’re given a penalty when a little munchkin got tangled with Amankwaah off the ball from a corner. Ref points to the spot, the clock reads 86 minutes. The resulting penalty by Dundo appeared to be scuffed and the keeper somehow still manages to push the ball onto the post before it is cleared.

Still, the drama is not over. Suddenly a Fleet player starts to goad Dundo over his miss. I’m not too sure why you would do this to a geezer of his stature, but he did. Gomis doesn’t like any of this and gets involved with the group now forming just in front of the goal line, handbags winding up ready for action.

To me, Bedsy clearly raises his hand to the number 2. But no different than what the Fleet keeper did earlier on to JC. Moments later (and there was a very clear delay in his reactions) the number 2 goes down inside the goal like a pensioner falling into bed. Was he shot? Did the sniper use a silencer, so no one heard the shot?

Lets not mince our words here. The motherfucker feigned an injury to get Gomis sent off. And of course the twat in black produces a red card. Still can’t see how he could give two different cards for the same type of offence. All I do know is that now we must have one of, if not the worst disciplinary record in the top six divisions? What is it now 30 yellow cards and 3 reds?

Of course time runs out with no further trouble from us and the Fleet players celebrate like they’ve won the world cup. Or at least the pools. Fair play to them, they got the result they wanted and we got ’em right out of jail there at the death. For us, the seeds are there, its just the dreaded DDs still holding us back. I also felt tonight the right wing was much stronger than the left.

After clapping the boys off for their efforts, we made tracks back to Donna Rachele, via the longest way round the fuckin’ ground possible. So much for Mr X and his clever parking! With Taz & 4 Days with us, the return journey was quick and quiet as we tried to decipher what exactly just happened. Seeing some of the other results come through on the old dog didn’t cheer us up at all either. Although X did remind us the scummers had got done by a last minuter the previous evening.

In record time we were back in civilisation and Taz was the first to alight. Conversations were already turned towards Saturday and Weston away, with rumours abound that it wont be cheap on the choo choo what with the egg chasing finals starting on Friday and us heading to the land of strange shaped balls where that sort of stuff is common.

Bollocks, that reminds me. Mainly Madness are down at the Boom Boom on Friday night. Its going to be another expensive weekend for me! So to finish off here is another classic clip from the Fast Show to lighten the mood, reminds me of a few down the Lane an’all….

Percentage of games with no Sutton cards: 10%