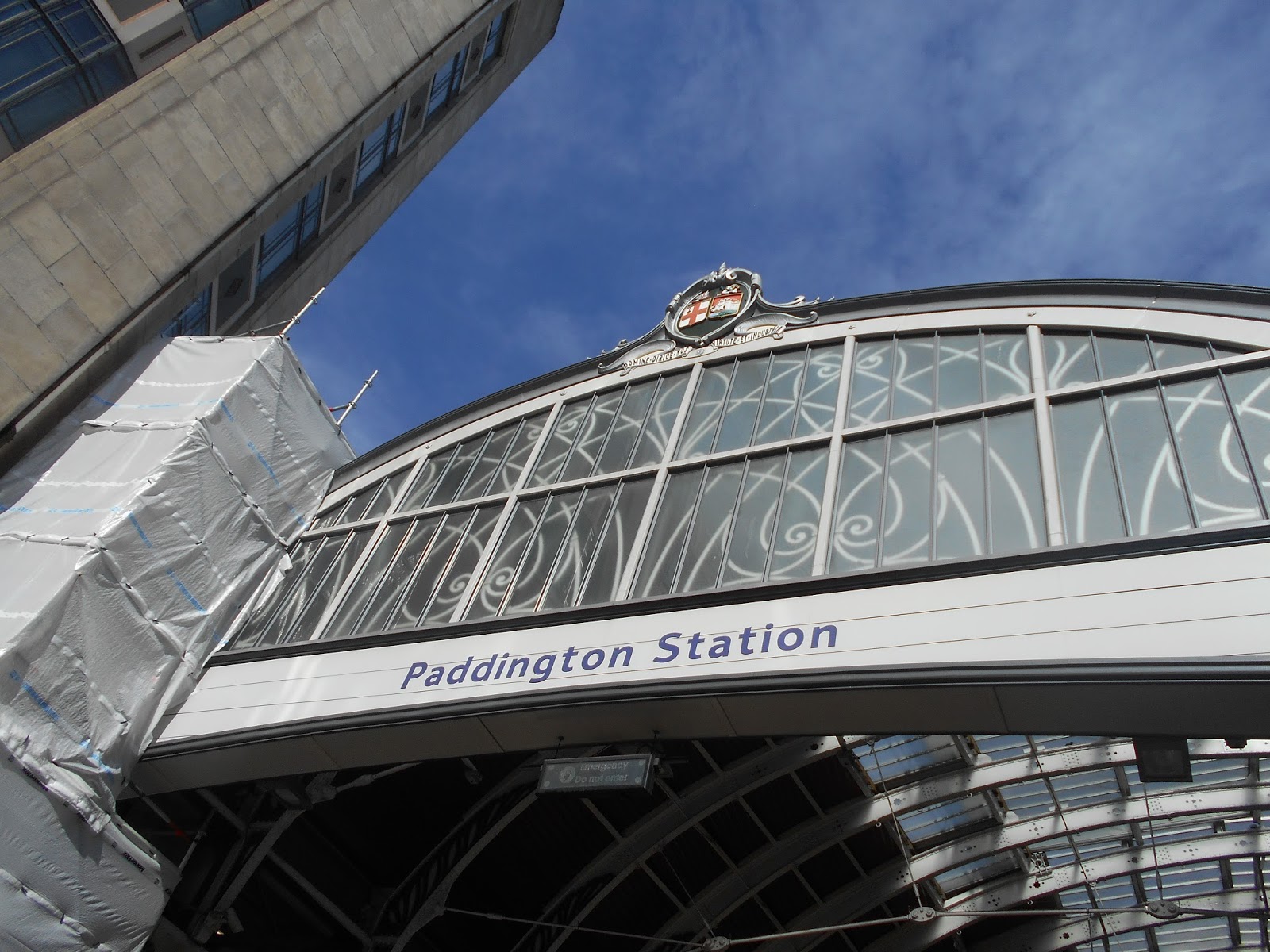 Maidenhead, oh good old Maidenhead. For a simple away day it does have a reputation for getting slightly out of hand when the Gandermonium boys are in town. I was just hoping that this game would make a change from the debacle that was Mr Kaye on Monday night. Luckily for everyone, Juan was in the driving seat for that one because if it were me, then, well there might’ve been a bit more swearing involved!

Now as we play it seems Maidenhead every single fackin’ year, getting there is very simple indeed. All you need to do is get your arse over to Paddington and then take the train West. For us today it was to be the 0911hrs train from Carshalton. Meeting Taz and sipping a cup of tea we awaited for the train to arrive.

The only people MIA for today’s game was the Firm Leader and Francis Benali. There also has to be a mention to one of our boys that is doing the dirty deed this Friday. This was originally due to be a sort of Stag Do for the fella. But in true Gandermonium style, we had a Stag Do without the flamin’ Stag!

There was a little surprise on the train and that was Wardy with his collection of Northern treats for everyone. Personally I went for a very sweet Eccles cake and Taz had a raspberry turnover. No one fancied a custard tart though. Oh the signs of us getting on a bit! For once there was no debauchery on the London leg of the journey to mention.

Arriving at Paddington we sent Taz off to buy the tickets as us smokers went outside to feed our habit. The train that we were due to be was the 1027hrs at the furthest platform in the whole place. Passing the very “tired & emotional” fella and the dog taking the opportunity to clear its bowels on the platform floor we jumped on the train and arrived in Maidenhead just before eleven.

The first pub of the day was the local trusty ‘Spoons called the ‘Greyhound’. Of course the first beer of the day was a nice cold pint of refreshing cider because lets fact it, the day was turning out to be a right scorcher! There was also a welcome addition of some of the greatest crisps in the world, none other that Branningans Roast Beef & Mustard.

With it only being a ‘Spoons the only other entertainment than our selves is the rolling news screens on the old boxes around the place. The current news was of the trouble around the border between Macedonia and Greece with illegal immigrants being stuck between a rock and a hard place. Of course any political subject is a hot potato where Dr Bell is concerned.

The next pub was the ‘Corner House’ which surprisingly was on a corner! Here we began to watch the Leeds vs Sheffield Wednesday game on the box (Have a butchers at the Wednesday goal, absolute stunner). Marky N had also finally caught up with us by this point, but somehow he did manage to get away with no late fee into the whip.

As some of you may be aware that Juan (Fleetwood after 10 pints) had so nearly got lucky last week with his best Fleetwood impression that in his honour some of us decided to create a new terrace chant for our new striker:

The next stop on our tour was the Maidens Head and the most expensive round of the first leg was followed by a rather heated debate between myself and Taz over the differences between Lancashire & Yorkshire. Even though it was mentioned that they were separated by the Pyrenees (what a wally!) it resulted in Taz trying to blind yours truly!

With the time getting on we needed to make tracks towards the ground. Waiting for Taz to have a toilet break we were the last two to leave. Did we make it to the ground? Of course we bloody didn’t because some Welsh wingnut thought it would be funny to instead go to that den of thieves & dirty glasses, The Anchor. Considering that we were the only people in there, tells you what type of place it has become. To add insult to injury, Mr X’s polo top made her think we were due to be playing at the bowls club over the road next to the ground! This then spawned another little terrace ditty. A quick bottle of Bud later (the safest bet after last year’s experiences) and we made it into the ground just before kick off.

Covered in glorious sunshine it was Maidenhead who started the more lively. With only ten minutes gone Maidenhead got their rewards with none other than that man who always seems to score against us, Tarpey. Given so much space just outside the box, he had plenty of time to line up his shot and slot the ball past Worner.

After this Our Lord Dos decided to swap Stearn and Wishart back over into their preferred sides of the pitch and it seemed to pay dividend with Wish getting behind the right back several times. All it lacked was the perfect ball in. Several times we either saw an over hit pass or a block from one of the Maidenhead defenders.

With time fast running out in the first half, Sutton finally got the break we needed when none other that the legend himself, Dundo got his first goal of the campaign. It was Wish who finally delivered the proper cross that was first met by the head of the man mountain. This chance was saved by the keeper but the rebound fell back to Dundo who smashed it back into the net. 1-1!

Second half saw us take residence in the baking heat of the exposed other half of the ground. It was that hot that some of the boys removed their shirts to get a bit of tan on. Lenny the Maidenhead fan would later remark that as they viewed from the other end his mate asked who were those getting naked, he simply replied “One of ’em has to be the Duke”.

The way that the place was heating up meant that the game was going to lose its tempo. There was a couple of half chances for both teams but nothing really that you could call as a match winning chance. Fitchett was introduced for Fleetwood to give us some more pace but he never really seemed to match the tempo of other games.

Tommy Wright was brought on for Stearn with fifteen minutes to go and then with five minutes remaining Anderson was given a debut by replacing Wishart who’d pulled up lame. There was one surprise remaining when after coming on, the board being held up and the geezer on the tannoy announcing it, some flag waving by the linesman resulted in having Anderson booked by the ref for not telling the lino he was coming on. Talk about a debut and a half! The game then finished 1-1 with us hanging on a bit as Maidenhead had about 12 corners, but all came to nowt.

After the game we all retreated to the other ‘Spoons in town to digress the match and see what the other results were like. Eventually we were joined by GMOSC member Lenny and the beer begun to flow more freely. Next on the list was to head back to the first ‘Spoons and catch up with other Maidenhead supporters. Eventually we begun to make track back to the train station but not before more drink was consumed at the Bell.

With some of the boys doing the chicken run, it was down to me & Mr X to stock up on the drink for the train. The problem with this was that we sent the boys to do a man’s job, because when they returned they announced that the had purchased 18 pieces of chicken. Unfortunately they didn’t mention the 18 pieces were in fact poxy little chicken wings! Wardy also repeated his trick of last year by producing a selection of ice lollies for the gang. Back in to town we decided to hit another pub and plan our next course of action. The Castle was this choice at Farringdon.

There did seem to be a bit of a mix up as some of the boys went to Victoria and others went back to East Croydon. That left me, Juan, Mr X & Wardy to hit Sutton. Of course, Wardy & Mr X called it a night at West Sutton and even Juan had by now given up the ghost and stumbled to the nearest cab rank. And then there was one, so even I had to call it a day and save myself for Friday and Burger’s first big day.

Percentage of games with 3 or more Sutton bookings: 100%