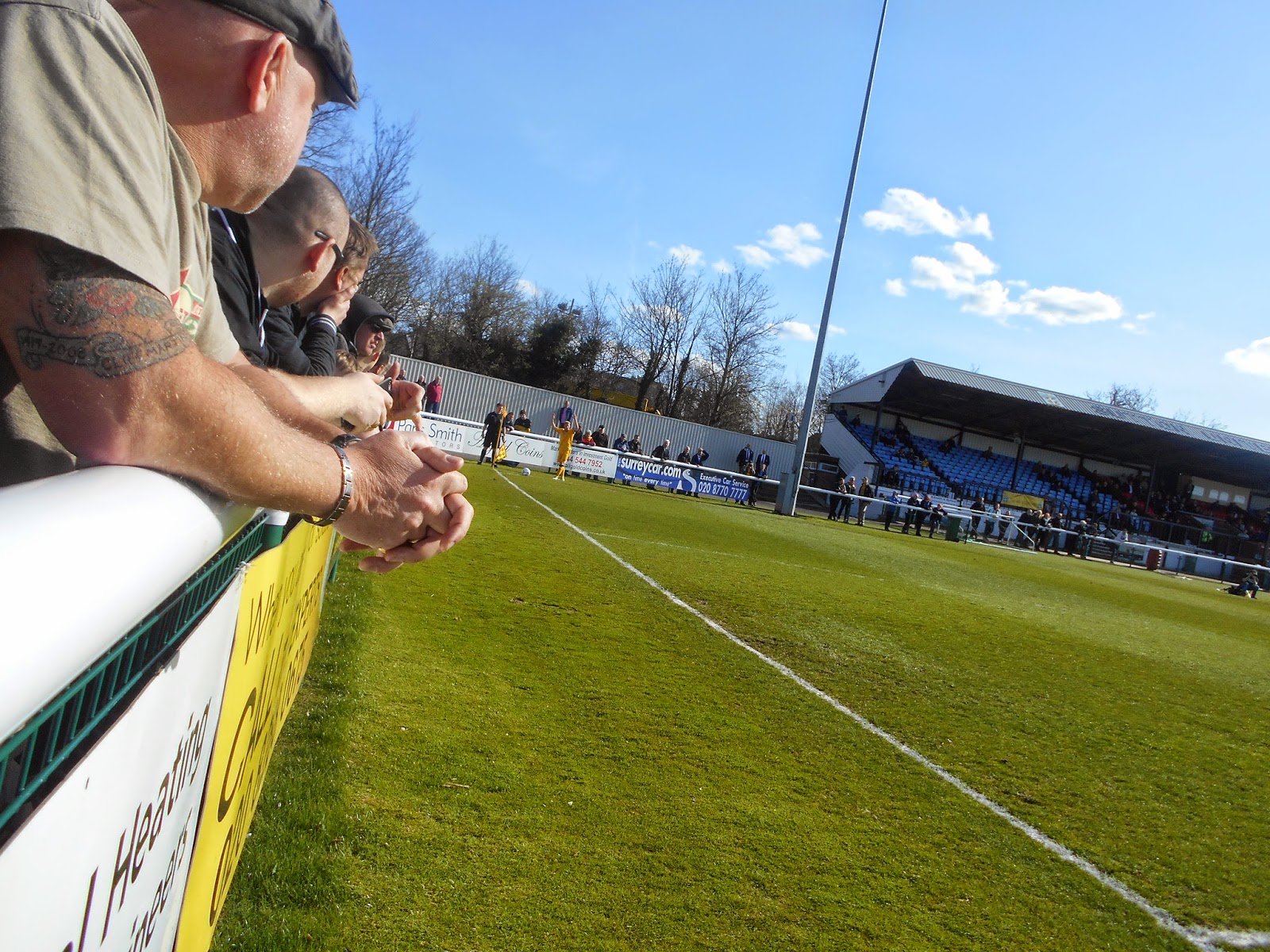 Ah Easter, Some would have you believe that it is all about the death & resurrection of a carpenter’s boy from Bethlehem. Others think that it is a free four day weekend to lounge about in their pants watching Jeremy Kyle. I just think it is the annoyance of trying to get two games into three/four days that never quite go to plan.

Saying that, I still remember back four years ago when, playing at a more pointless level, we actually had the footballing gods with us as we secured our ascendance into the Conference South. Speaking of which WHY THE FUCK are we being rebranded as the Vanarama National League South? You have National and South in the same title. I might be simple (don’t agree) but that don’t make any fackin’ sense to me.

Receiving a call from the Firm Leader on Friday instructing me that he want to hit the midday train instead of the usual had me thinking that Saturday might be a bit of a long day, I wasn’t wrong! After foolishly trying to plan ahead, I took my money out on the Friday. As is always the case, the winter gas bill arrived and I was once again forced to take more wedge out for the festivities on the saturday.

Walking up to the station I bumped into a couple of old school mates who were taking a trip up town to watch the boat race. With the amount of cans that they were carrying I reckon that they probably had a good time. Meeting the Firm Leader we jumped on the train and not before long we were making our way into the bar.

For some reason, we decided to forgo the usual cider in return for the flavourless taste of lager. Taking my first sip of the shit before me, I was summoned over to Rose’s by Mr X. Apparently a resident had complained about a goal behind the Securicor terrace. I’m not quite sure how a goal behind a terrace was in the way, let alone annoying a neighbour, but still it needed to be moved.

Back in the bar and we were joined by Dogger who begun to give us the story of the Boom Boom club the night before. With Mainly Madness in attendance two nights running it appeared that they were on good form. A blast from the past in the image of Juan was also present. I’m still in shock from seeing him!

Taking our place on the hallowed Shoebox we were covered by the glorious sunshine. For the first quarter of an hour the contest appeared to be an equal affair with both teams trying to impose themselves. It was after this that Sutton took the lead. After the first free kick by-passed most of the players, the second seemed to head towards the goalkeeper for a simple catch.

Instead he decided to punch the ball away but done it in such a dreadful manner that it simply rebounded of Collins and sailed into the goal. 1-0! Taking a shock lead seemed to inspire us to take the game to Basingstoke with our only chances from Louie and Dundo failing to really challenge the keeper.

When it seemed that we would go in at half time in the lead, some of the Firm started to walk around towards the bar. As I was wasn’t looking, I didn’t see if it was a penalty or not. All I saw was the player just inside the area and the man in the middle pointing towards the spot. The resulting kick was delivered into the back of the net and the game was all square again. According to some of those that I spoke to, it seems it was a just penalty. Damn.

Straight from the start of the second half Basingstoke appeared to take control for some period of the game. Saying that, they didn’t really have any clear cut chances that I can recall. Dundo seemed to have a shot cleared off the line with an apparent hand ball and them moments later we saw another chance for him deflected over for a corner.

With twenty minutes remaining, Forbes & Fitch were brought on for Dundo and Micky. Ten minutes later Binns was introduced for Louie and the play was directed between the two wingers. Binns and Wish saw shots dragged across goal and with the feeling was that a point was going to be enough for us today.

Just like last week though, we grabbed a cheeky late winner. The Basingstoke keeper (MOM for me) once again impressed us with his (bad) luck. And it had appeared to us that he was having a bad time remembering some of his ‘keeping ability. A last minute Southam corner, that should’ve been caught, was flapped at by the stopper, only to fall on the nugget of Cooper who headed into the back of the net. 2-1!

After the game we returned to our favourite past time of consuming mass amounts of alcohol. Looking at the scores coming through, we saw that Farnborough had finally been relegated (shame!) and that Hendon over the course of a couple of days have all but given the Ryman league title to Maidstone. The Scum also lost and kept the glimmer of hope alive in the nice part of the borough that they might get relegated again.

With the Strikers are Key draw looming, Scouse Graeme asked if Wardy would do the honours if his ball was called. As luck would have it, his ball was indeed picked out! Wardy then done his best to work the crowd by playing to their opinions of Scouse stereotypes. First he took the £50 consolation prize, then attempted to steal the safe itself, before taking all four keys out of the bag! Finally he picked just the one out, but failed to open the safe. As with last week, Mr Barry knew that he actually had picked the right key and after some encouragement, Wardy eventually did crack it. Not bad for £200!

With most people now leaving, Mr X decided to rustle up some pizzas to be delivered. He initially fucked the order up by having them delivered to his house. He eventually remedied this by changing the delivery address to the bar, where we were. The pizza that I ordered appeared to be with some sort of garlic base instead of the usual tomato. Either way, with a skinful of drink inside of you a bit of stodge is always welcome. So I didn’t care.

Instead of the usual swagger into Sutton high street this evening, some of us were invited to attend a little soiree next door. Everyone loves a little bit of Ska and Two-Tone and we here at Gandermonium are no different. With all the classics being played, we managed to stomp a foot or two whilst the beer continued to flow as the clock rushed towards the AM.

After jumping in a sherbet with Mr & Mrs Firm Leader I was soon home. Sadly, unlike most people I didn’t just go to bed. No no no! Apparently, it seems after checking my e-mails the following morning I went on a little two hours past midnight Amazon splurge! And not just the one purchase, but twelve! That’s right, I’ve ordered twelve fuckin’ DVDs.

And finally, with the way that the club is changing before our very eyes, we here at Gandermonium have a little suggestion as to a new possible walk out tune for the players next season.What do you reckon?

Right, that’s all from me and the antepenultimate (there is such a word, trust me) match of the 2014/15 season. Bath away next week, with yours truly once again on blog duty. And I’ve got a feeling that could be a messy one!