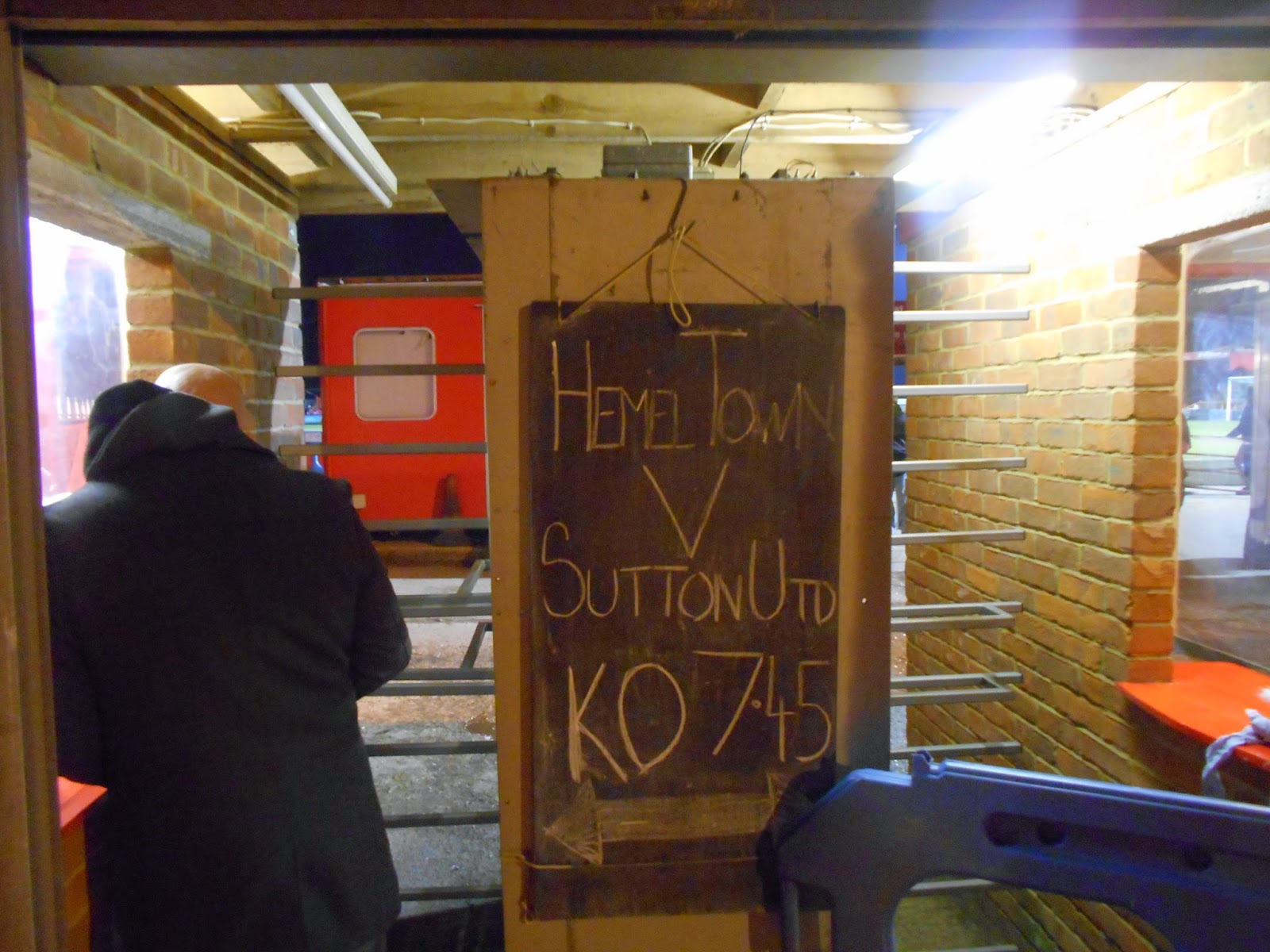 There are some people that would say that your football luck averages itself out over a season. They claim to some sort of Kismet or Fate that plays its hand over time. Well I don’t give two shits about all that bollocks and things never truly even up. You just have to roll with the punches and except what is, is. That’s what happened against Hemel Hempstead.

One productive moment on Saturday was me sorting out a lift up to Hertfordshire in the old Donna Rachele. Things were going to plan from the moment I finished work around midday and arrived home half an hour later. A cup of Rosie & a fag later I begun to unwind. Things started to go wrong when I begun to read a book (without pictures), five minutes later I was out sparko.

I awoke with the clock reading 15:59, bollocks I screamed as I was due to leave at four. I rushed in the shower and ran around looking for some suitable clobber. By twenty past I was out of the door and off to park near Mr X’s abode. With the car dumped I took a brisk walk towards Cheam via the high street.

Its was surprising to see that Bon Bon’s the newsagent had “Siege Trading” and closed. Meeting Mr X at five we jumped into the Donna and were off to Hemel. Simple trip really, over to the A3, down to the M25, coming of at the A41. The only hairy point was at Hemel where we met some sort of crazy roundabout. Six of the buggers surrounding a fuckin’ huge one. What’s that all about?

Still we made it to the ground well ahead of time and begun discussing the recent events with other well travelled supporters that had made the trip. The other two Firm members making the trip were coming up by train and did finally make it, but not before heading for a little libation beforehand at Euston. For some reason 4 Days & Taz were handed a leaflet on their way in regarding language and other pointless shit. I did wonder why I wasn’t given one but then again I clearly don’t look like the sort to engage in such things!

We took our position to the right of the ground before having to move around. This was not before one of our Youth Firm members Johnnie had asked Taz for some clips to hang up his flags. Taz stated that the big flag rarely travels to away midweek games and Johnnie would have to learn his lesson to remember them next time. This was when he produced some purple wrapping ribbon that you use to tart up a gift as his backup plan. Fuckin’ ‘ell the Youth of today!

Now at the right end of the ground past the segregation left over from the hosts Torquay game at the weekend we took our spots behind the goal. So where to start with the Match? Well, lets start with a certain Mr George who had the unfortunate task of being the referee. I know that some of the fairer sex would say that screaming your disappointment at the man in the middle would not help, but this git had it coming from as early as only the fifth minute.

Middle of the park and Micky goes to nod the ball with the intention of running on to it. He succeeds in this simple exercise. Boom! He takes a shot in the face (later turns out to be his shoulder) with a boot and goes down quicker that a prostitute on speed. A chorus of anger grips the travelling support. The first half stewards stand and let the mist clear. What does Mr George do? Well, he blows his whistle and aims his hand towards the Hemel goal. But that was it! No card!

If that was a Sutton player he would at least get a yellow. Guaranteed. We resist some pressure for ten minutes with Hemel attacking the left back position with some success. Its clear to me that Wish is much better attacking than defending as he fails three times to deal with the danger. Sutton then pump the ball up top and I expect the defender to deal with the situation as Fitch closes down the play.

Suddenly the boy slips and lets Fitch have the ball. He calmly takes the it around the keeper and tucks the ball into the net. 1-0! Without guessing you’d know the boys behind the goal went mental like a bunch of rabid dogs. Now the ref begun to get in the way of the football once more with some strange decisions and actions. Wish was another caught late, outside the box this time and again didn’t get nothing from the man in black.

Just after the first goal Scans went down and got some treatment. Then he ran after a ball before pulling up. Moments later you knew he was gone when Our Lord Dos screamed for Shaq to get ready and was quickly introduced to the game. Fitch also had a painful moment, screaming near the end of the half when one of the defenders appeared to pinch his bum!

Hemel had two good opportunities in the whole first half. The first was when Howe was beaten to the ball and could only watch as Cooper saved his bacon by heading off the line. Their second was the gut buster when Parkes, who always scores against us anyway, received the ball from a Sutton cross-block just outside the area. He knocks it left, and smashes the ball into the net. As a result we go into the interval all square.

The second half started in a different manner with Hemel failing to push on from their equaliser. Those of us on the terrace also had problems with a lone steward trying to impose his will on us like a Korean communist dictator. There was about to be some hassle on and off the pitch. First a Hemel player is booked inside the Sutton box. To be honest I couldn’t see what happened.

Next Gomis received the ball on the half way line and began to travel at pace. A Hemel defender lunges at him off the ground and misses the ball. A clear cut card, the only issue is what one. Then a melee begins and some Hemel idiot, clear as day, nuts Collins to the ground, The lino had a clear view of this but said & did nothing. The ref finally gets some control and books the first Hemel player and then Micky. Hang on Micky? Collins is on the floor receiving treatment and Micky get a yellow? Fuck Off!

Well you can imagine that doesn’t go down too well with the Sutton faithful and our anger is heard around the ground. The steward takes exception to this and tries to intervene. He looks up and down the crowd, who does he pick on? Kiddo? Frakey? Taz? Mr X? My forever innocent looking self? No he heads towards 4 Days and demands that he refrain from adult language. Of course this isn’t heeded to and threatens to take action. Of course nothing happens and he eventually trots away sheepishly.

Gomis doesn’t last much longer and is replaced by Binns. The ref still doesn’t want to be outdone and goes into overtime retard mode and books Shaq for kicking the ball against the wall. This only happened because Shaq just failed to keep the ball on the pitch and cames out of frustration. He is then soon subbed afterwards for White. I do hope he doesn’t lose heart over it. Coming on as a sub and then being subbed yourself can be quite deflating, but it just wasn’t happening for the lad tonight.

Southam receives his 10th booking when he fails to take the ball back quick enough for a free-kick. Unfortunately Hemel are of course allowed to take 10yrds on all their throw ins without any fear of being brought back by the officials. They had once decent chance for the points when a shot looked like sailing in, but only went wide at the last second thanks to a bobble on the badly cut up area!

With five minutes to go everything changed for the better for once when Fitch latched onto a Collins through header. My first glance was to the lino who was struggling to keep up with play. Then with my attention back on the game I saw Fitch slot the ball under the keeper. 2-1! We went fuckin’ mental! I remarked to Mr X “season changer?” His reply: “Fuck Off!!”.

There was still time for more shit to happen with one shocking decision by the lino who felt the ball went out for a goal kick when clearly it was still a yard on the pitch. The final hilarity was when a shot from White flew into the crowd to the left of me. A certain board member (who shall remain anonymous) ddi his best to delay giving the ball back. Suddenly the keeper vaults over the wall and careers into the crowd searching for it. I’m sure that is at least a booking according to the laws of the game? Rumours are then spread that said board member is escorted off the premises! Shame he wasn’t. Ha! Ha!

The final whistle eventually did blow and the sense of relief was felt. Cheering the team as Binns did his trademark shuffle across the box was also satisfying as compared to the Trophy game there in December. Our Lord Dos even joined in by climbing over the wall and hugging a very excitable 4 Days. Rumour had it that he was sporting a semi, but I wasn’t going to check it myself!

Back in the car we were back Sutton way within a hour of leaving the ground. One remark that Taz had made was that as he was leaving, a rather senior Hemel supporter – who has screamed and shouted at Southam for diving on a clear penalty shout – said that we would want to have that referee every week. Do behave fella, If I had him every week I would soon be taking the long walk to infamy.

Saying goodbye to Mr X, I took 4 Days & Taz the rest of the way. Taz claims that he won’t be around for Concord away Saturday week as he has to spend time with the better half. I calmly asked him if she would consider a weekend away on Canvey Island. His reply was simply, like Mr X earlier, “Fuck Off!”. Why is everyone now swearing at me? See you Saturday.