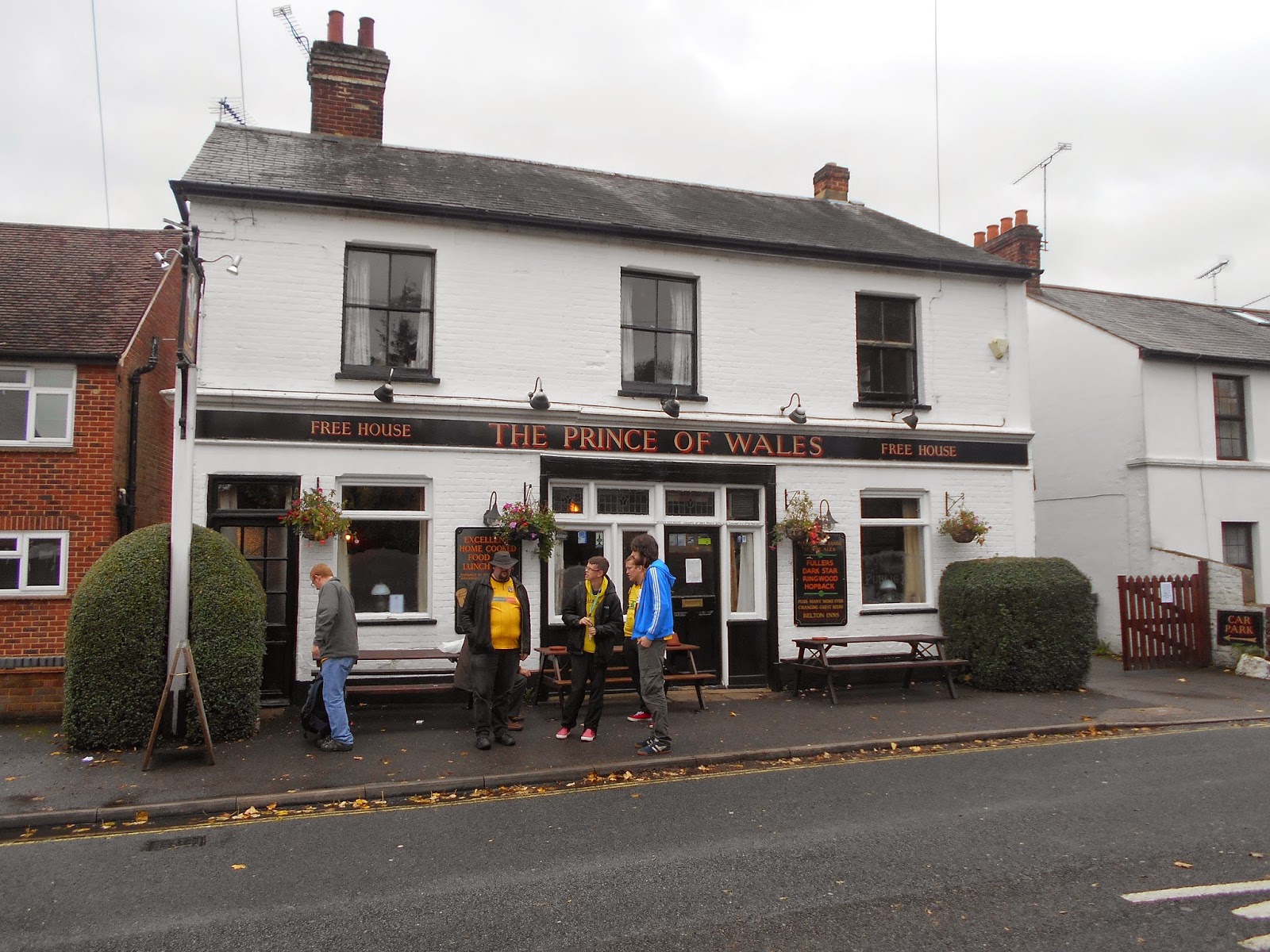 Jack and Jill went up the Hill, To have some hanky-panky, silly Jill forgot her pill, And now there’s little Frankie. I’m here all week folks!

A man once said “a week is a long time in football”, personally I think that a week is the same time in any walk of life but this week has thrown up a few issues. First we crashed out of the FA Cup, even though it wasn’t a shock to those that follow the team. Secondly we’ve seen some movements on and off the field. And thirdly and most importantly, I managed to leave my latest top up of two hundred fags at the club.

On the squad front, another ex-pro in the shape of Shaun Cooper has arrived from Bournemouth via Torquay. We also have heard that Shaquille Hippolyte-Patrick has been promoted from the Reserves. Leaving the club is two of our coaches, Matt Lockwood & Jamie Lawrence. I can’t say that I ever spoke to Lockwood but Jamie could be seen in the bar after a game with a Guinness in his hand happy to speak to the poor working-class fans like myself.

Right, so onto Farnborough. Last year we got their most loyal supporter Totts to do the work, but with me not doing either of the last two blogs it was about time I made the effort. Some of you might (unlikely) be wondering what has happened to our serial bishop-basher Juan, I know he has only “officially” done two blogs this season but lets just say he is currently greasing his head, or maybe polishing his gearstick or even scraping his shaft.

The late Friday night text from Taz was sent out to the Firm members for their approval. Being on the computer at the time had me check the train times to see what he had in mind. Unfortunately Taz, now showing early signs of senile dementia, had misread one of the connections. Not the most important one but the mode of transport between Farnborough Main and Farnborough North. The sign was of a man walking but he thought it was a connecting train.

I awoke Saturday morning to the sound of Soviet Union national anthem ringing around me. Quickly into the shower I manage not to shave a single bollock hair with my clippers. A quick splash of God’s own Brut and I’m out of the door before I realise that I’ve left my wallet at home. Second time around and I’m off towards the station via the local friendly hole in the wall to stock up on some much needed readies.

The plan is to get the 0932hrs train out of Carshalton. I arrived in time to meet Taz and get him a cup of tea. The usual boats were around as the train arrived at the platform. The only snag was the train didn’t stop where it was meant to and that forced us to trot down the platform with our cuppas to get on it. With Mr X & Wardy due to meet us at Clapham we purchased some tickets upon arrival and awaited the train.

The ride was smooth and we arrived at Farnborough Main just after eleven. Walking over to Farnborough North we bumped into a couple of locals who were as depressed as we were over their recent results and various stories circulating around. Sometimes you have to think how lucky we are at our club in the way that it is run and managed, so even when we are shit on the puitch, it’s usually not because we’re in the shit off the pitch.

The pub that we were going to abuse was a new one in the “Prince of Wales” it didn’t open until half past the eleven so we all had to wait outside like ugly groupies at a rock concert. When it was finally open we all of course headed towards the bar for our first pint of the day. There was also a beer festival on this weekend and this at least kept all the real ale drinkers happy. I personally went for a lager to start with, before moving on to something called a “Hazy Hog” that someone claimed was Cider later on.

There was also a barbecue being set up in the back car park, the only thing ready for us was the usual hamburger but at a fiver we passed on this for something later at the ground. Being out in the sticks meant that this beer festival was also going to be frequented by the one thing Mr X detests, Morris Dancers! What made our day was some crazy arsed fool dressed as a horse, even finer was the moment that Mr X discovered this fact, his boat said a thousand words.

Deciding that we’d had enough of local fetishists, cabs were ordered and we soon in the clubhouse to meet some of the other less travelled supporters that were making the trip. Wardy managed to produce a rock cake from somewhere for yours truly but I was forced to try and spread some frozen butter on the bugger, which was a challenge. Leaving the bar for the game, we first tried one entrance before being moved to the front where somehow I managed to get in as a child (must be my youthful good looks) and Wardy as an OAP.

The first half an hour had the boys produce very little, but this was far far more that the home team ever did. I will be surprised if Farnborough don’t struggle to stay up by the end of the season. For a team at home they failed to create anything for their dwindling support and judging by the state of the pitch I don’t know where the money is going from the rent Reading ladies pay for this place.

Most talked about point from the first half was when Jessy was tripped just outside the box by the last man. I looked at the lino as he began to wave but the ref failed to give anything. Speaking of the ref, the amount of times we’ve been told that the man in the middle is Coggins before someone points out the error of our ways is getting silly. Stop spreading fear & lies people! Still the first half was better than the last game and there would be only one team who would win the match. Sadly they weren’t yet.

Second half we finally got to go into that big new stand that we’ve seen slowly being erected over the last few years. Flags were allowed on the seats and standing didn’t get a dressing down from the stewards, probably because they were glad anyone had fuckin’ shown up in the first place. The only snag was there was no smoking allowed. Not perfect but if it was, it would be at Gander Green Lane clearly.

With the new view in front of us we got to see Lovelock back in goal. To be honest he had a largely pedestrian time in between the sticks with only a handful of half chances to deal with. At the other end it one way traffic with various crosses just missing their targets and shots that just didn’t have the pace to find the back of the net.

Southam was on corner duty and other than a couple of pony efforts his corners seemed better that what we’ve come to see recently. Clough did manage to get a peach of a header on one of them, only to see it go agonisingly wide. With Dundo & Jessy upfront the Farnborough defence were stretched to breaking point. One particular move saw Dundo get behind the defence to appear in front of goal only for the bloody keeper to make a double save.

With a quarter of an hour to go we finally saw the introduction of Reserve player Shaquille Hippolyte-Patrick. With him and Bignall replacing Binns and Jessy the game became more stretched than before thanks to the fresh legs. Suddenly Southam is tripped in the box, he went over a bit swan lake but it was a clear trip (even the keeper agreed). The whistle goes and then one Farnborough player has his arm around his neck. But the ref fails to point to the spot on even books Southam for a ‘dive’ but says nowt to their geezer for his assault on the blonde wonder.

By now the time is running out, Shaq collects the ball on the half way line only to be chopped down in full stride, yellow card is awarded. Then we finally have our moment. Dundo is awarded a very soft free kick. Southam sees a hole and after asking the ref for a quick take slots the ball into the box where a lonesome Bignall is onto it. A quick turn and the ball is stabbed in the direction of the goal. The keeper doesn’t get near it and the agonising wait for the ball to roll over the line begins. Seemingly like Bignall himself, we are all a little surprised he has scored, but scored he has.

This of course starts mass celebrations towards the advertising boards. In the ensuing melee of support a gate is ‘accidentally’ kicked open. The wrong end home support are not happy at our slightly over the top celebrations but we ignore them and instead ask the question: “Did Bignall just fuckin’ score?”

Before you know it the whistle has gone and we start to celebrate the victory. The players give us the thumbs up, with Binnsy doing the dance and Southam having a fit of excitement. It may not be the best performance of the season by any stretch but the result counts and it was a step in the right direction. We just need to build on it further. Heading into the bar like an invading army we refuel ourselves and take delight in the win. There were no Farnborough supporters to be found in the clubhouse, except a steward who commented that the away game will be different. Probably meant there’d actually be people at that one. Soon it was time to leave though and we ordered cabs to take us to the Thatched Cottage down the road. Several pints later and I was regaling our tales to a rather bemused Man City supporter and his West Ham mate. While this happens Wardy wins at darts and some crazy little Welsh fella remembers us from last year.

Deciding it was time to walk back to the station, some of us had the foresight and intelligence to go via the high street to get supplies for the journey. KFC, Beer & a weird tasting can of red Desperado’s were all that we needed to get back home. Well, I say home. I really mean Woking because that is as far as we got before deciding to hit up Wimbledon instead for some more beers.

I think we ended upstairs in the Alex eventually, down to the last three of us as everyone else had disappeared off into the night, somewhat tired and emotional. There did also appear to be a mysterious smell of baby oil hanging in the air, but we failed to locate the source. Still not suitably refreshed, the remaining few headed back to Sutton where surprisingly we were met by Juan! Yeah I know, he must’ve finished early!

Next thing I know we are in Tapuri looking at the now rather weathered Gandermonium shrine outside. Most of the conversations are now about Juan’s “car”. Eventually Me and Taz decided to get a bit of the old crème de la crème of late night English cuisine aka Doner Kebabs, not the best idea of mine but then again not the worst. On to Bishops Stortford on Saturday the Youth game against Eastbourne were I might be able to reclaim my fags.

By the way did I mention Bignall fuckin’ scored?