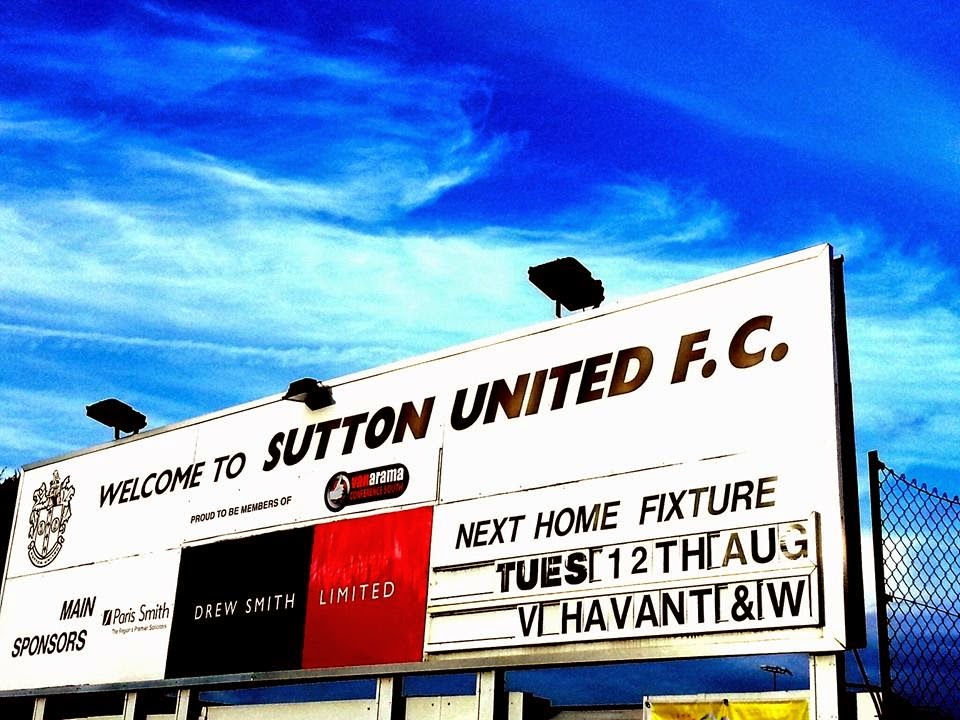 Time check-5 pm:- Time to leave work and give it legs to the train
station to make the next available train back into Sutton. Sweating like Oscar Pistorius waiting on the verdict at his murder trial I make the
change at Sutton, and head back into the wilderness, no phone signal area of
Banstead. The key into the front door and I’ve made it home in 50 minutes, touch!

A quick drizzle under the shower, a spray of cheapo lynxo and I’m ready to
rumble. Enough time to grab my clobber, flags, smokes and other non league
football paraphernalia for tonight’s game.

I jump in the 500, and suddenly realise, over half way to
the club I’ve left my smokes behind. Fuck it ! A quick pit stop into Mulgrave
Road to grab some Taylor Mades from the corner shop, and everything will be
fine, until some prat in a Mercedes Estate tries to run me over- wanker! With
a sudden death nearly taking place, I jump back in the motor and head off down
the back streets to the place we call home, Gander Green Lane.

On arrival at the club, heading towards the direction of the
club bar, Taz and Dukey rock up in Taz’s toaster, and we piss off in doors for
a pre match drink. A well, acquired non pint of booze for myself, hardcore me,
that’s how I roll!

The usual faces appear in the bar, even Mr & the future
Mrs Burgess rock up for the occasion. The Welsh one (aka four days) Mr X,
Chalmers (no Mrs Chalmers and kids tonight) and the usual mob are enjoying their
pre match pints before Kickoff, when Mr Burgess pipes up and mentions that he
hasn’t even seen the summer developments.
So myself and the two Burgess’s piss off about 15 mins before KO so he
can take a closer look at the new stand and all the other bits and bobs and
well I have to say the place is given the full Burgess approval.

A cup of tea and Twix, and we’re ready for the game, so here’s
the line up :

Kicking off in our usual manner, towards the Collingwood
End. A quick dash round from the Shoebox to erect (yes I said erect-grow up!) the infamous flag grabbed from home earlier and hoisted the bugger up the
back of the stand. God knows why I asked for assistance from Burgess as he has
to be the shortest man in Non–League football. With the the game underway, the
weather conditions, a little on the blowy side, and with a big FUCK OFF dark
evil looking cloud soon to head over, most of the masses head for cover under
the stand.

With the wind picking up, Sutton keep the ball on the deck,
and we seem to be doing alright within the first ten or so, keeping hold of the
ball, and playing to feet. In the mean time Dos, this time round has chosen not
to climb the gantry but to stay within the dugout, giving clear instructions to
the lads, which can be heard echoing around the ground, in amongst the chants
from the lads behind the goal. Sutton continue to work it, with JT and Marvs
playing up top together as the fav starting striking option. Spillane and
Ricky taking control of the middle of the park, and Dundo playing in and out of
the whole with Kayne out on the right, and Cloughie marshalling the others from
the back.

We continue to use the space and width well, getting balls into the
box from both channels, but nothing really buckles from the Havant back four,
so are chances are cleared away on most counts. Havant however, not here to be
turned over start to get themselves back into the game, their left winger steaming
past Cloughie and turns across the box only to blast his attempt over and wide.
Another opportunity for Havant as our back four are stuck out of position and
the lad again steams through, a wave for offside is given by Clough, but is
not called by the lino. Out comes Lovelock making himself stand strong, and
commits himself to the cause and in the process takes the feller clean out,
just outside the area. Us typical Sutton fans fear the worse, was it a goal
scoring opportunity? Was it a last man situation? A minute passes by and the
ref pulls a yellow from his pocket, and places Lovelock under caution! Us U’s
fans thank the Lord as Kennedy would say!

Back in the mix, we seem to drop off the pace for a few minutes,
allowing Havant once more back in the game for a few snippets. However stern
words and actions are sent from Dos in the dugout, and we re-compose and get
the matter back in hand! We begin to peel holes in the Havant back four
creating space down both channels and begin to put together some decent triangular
passes. A number of crappy fouls are committed, the ref don’t seem interested
in showing too many cards tonight but keeps stopping the flow, with a constant
wave of free kicks in both directions.
Sutton on the break again, a chance for Marv is cleared away. Following
his chance on goal, Marv’s appearance is put to an end after he hits the deck
with an injury. The treatment follows as does our first sub of the night, step
up a man from Rwanda- Jessy Reindorf! Marv limps off, a possible Achilles tendon
is whispered around the stand. Who knows, time will tell.

Focusing back on the game, we continue to build on where we
left off. Jess the man from the southern equator is straight into the action, 2nd touch of the ball in fact.

A cross in from the left- and jess is away from his
man, and leaps into the air like one of them NBA Basketball players, and the
ball skims of the back of his noggin, and creams the Havant keeper and ripples
the back of the net. I couldn’t believe it, and I don’t think Jess could either!  Ha ha, the boy is a genius, second touch of the game and after being on the
pitch for like 8 or so minutes we go 1 up ! Happy Funking Days! We continue
another chance aspires from a through ball from Kayne into the path of JT who
speeds past his marker, and still onside with just the keeper to beat, dinks it
wide. We could have done with that one, to give us that extra comfort for what
was about to happen in the second half.

With brew in hand and chocolate bar-back in the shoebox,
talk about Marv’s injury is the shoe box half time talk. With no real facts at
hand we are clutch at straws.  The lads
now back out on the pitch our focus and attention returns back that out on the
pitch. Cue Tom Lovelock.

Some 24 hours have nearly passed since the game ended and I’m
still asking myself this very same question, what the actual fuck was that 2nd half about, because I’m a little lost to be honest. The first half we played
decent football, and what happened after the H/T team talk. We fell apart, we
lost our shape, we lost direction and focus, and my god did we let them back
into the game. Havant clearly weren’t happy with the outcome of the 1st 45, and did they up their game or did we drop of ours? So many questions. So
back to it then, we were under the cosh for most of the 2nd half,
wave after wave of Havant attacks, and BOY OH BOY DID Lovelock keep us alive.
With a performance like that from Lovers, I can’t see Julian making a quick
return to the number one spot.

I won’t however leave you on a down a dreary note, because
after all. A win is a win and three points is STILL 3 points. To be frank, I
don’t care how we win, so long as we win, and we can bank the big 3.

Oh
yeah and it’s our first home win of the season in the new Banarama Split
Conference!

This is Juan, signing off.