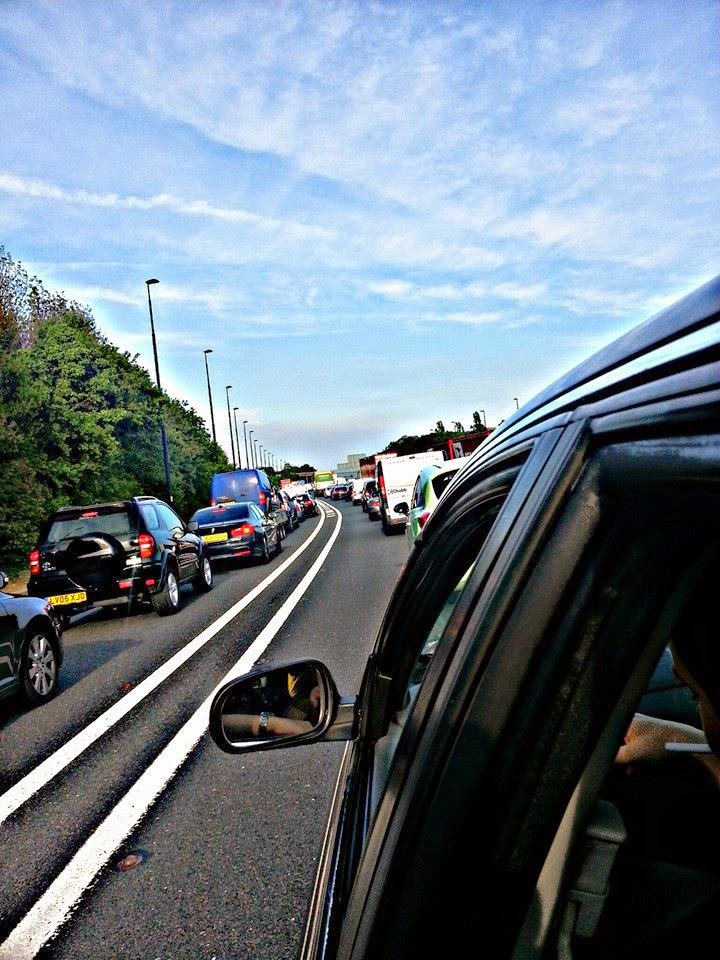 Time check: 1655, in a mad panic I rush down the office stairs and head into the gents to change from my work clobber into my football wear for tonight’s game. With time not on my side, I coat myself in the poor mans quick shower spray, a.k.a Lynx Deodrant, grab my gear and hit the streets of Leatherhead to meet the Duke at the organised rendezvous. Nope, not a glamorous pump, but Leatherhead station. I storm up the street in a military style, not giving time to those that may be in my way. Head down, and march on through.

On arrival at the train station, there is no sign of Dudkey, not his executive cab car that will see us make the journey M25 and onwards to Dover, where the White Cliffs will be on show. A few minutes pass, and up rolls Dukey in the Rover 620 full injected, turbo ethanol fuelled machine. Crockett riding shot gun, it leaves me no other option to jump in the back of the wagon. I dunno, the youth of today, no respect for their elders, especially not a man with a knee problem.

With Dukey slamming the auto box into drive, we weave in and out of the build up of traffic on the one-way system, and towards the other side of town, following the signs for the M25. Leatherhead can be a right bitch at the best of times to navigate out of, especially if your in a hurry! Some ten minutes pass, and we are clear of the town, and adjoin onto the M25. If ever we need a clear run on the 25 then today, please god let it be tonight. This was not to be, welcome to the World’s biggest car park!

To lighten the mood a little, Dukey boy fired up his in car entertainment system, deploying various beats from Guns N Roses and Nirvana. Nothing like a bit of Rock N Roll to get you in the zone for a game of foota. An hour and half passed and we finally turned off the motorway and arrived into Dover. Dukey quick to point out to Crockett all of the local boozers he had frequented over the years on various away days. The list was endless. Well, if Dukey’s job goes tit’s up I’m sure he’ll make a decent pub tour guide.

Parking up along a residential street, we grab our colours and head off down the towards The Crabble, spotting various faces off loading the supporters coaches. Fresh, unknown faces, with shirts on display from a few seasons passed. The saying goes, support is support. Let’s just hope this irregular faces return more often to Gander Green Lane. Climbing Crabble Hill, I sub Dukey the entrance fee for tonight’s game- a given since he does run a rather luxurious executive away day cab firm.

With time to kill, we all head off to the bar, and wet our whistles pre-match, a little fuel in the engine helps the chords. Half way through my pint of the amber nectar and who comes bolting through the door, none other than the man the legend himself, Mr Wayne Shaw. Mr Shaw’s blessing of good luck is given, and we leave the empties behind and head out to the terrace.

The teams are out, and we stand by for the toss of the coin. Looks like we are at the wrong end boys. The game kicks off and shuffle like minions down to the end we are attacking. Just as we are going down the slope, Dundo puts us in front after 46 seconds. Due to the shit slope I missed the fucking opening goal. What a knob! I have however been informed it was a dink into the box from Scanns and a smashing header from Dundo. Would have been nice to see it, still it happens.

With the masses now gathered behind the goal, the game carries on, and we look decent, still not at full strength but decent enough. The early goal giving us a lift. We look on top of the job in hand, and keep hold of the ball and link up well together. Dover however not to be under estimated get back into the game, at times starting to out do our back four for pace, on the break. Ben King coming under the cosh from Moses on a number of occasions. Waves of attacks from both sides, make this an entertaining game for a semi final Play off. Then it starts to get a little daft, a number of crunch tackles coming in from both teams, including a penalty shout from the Dover Fans, but nothing given. With the first half coming to a near close, King clears away a Dover attack, the subsequent throw is then not cleared away, and JB is stuck at his near post and miss times the bounce, and Dover toe smash it into the back of the net. Damn shame, if we could have just held out until the break, which would have given us time to re-group and go again…not to be.

Taking the more scenic route round the Crabble to take my vantage point for the 2nd half, and join the Sutton clan. I decide against the idea of getting a brew, as the queue clearly as long as the great wall of China puts me right off. So my thirst goes unsatisfied, however my hunger is given a boost…one shoddy airwaves chewing gum surrounded in fluff found in jean pocket.

At H/T Ben King makes way for Sinclair, which sticks Binns at left back. Straight from the whistle, Dover look as though they have re-grouped and have been given a bit of kicking in the changing room, as they come out with more to offer than witnessed in the first half. For some reason, we seem to be under the cosh for longer periods of time. and revert to the long ball, rather than playing it to feet and keeping hold of it. When we do play to feet the ball is stuck at such a pace, we can’t control it. However, saying that we do at times link up well, and put together some decent chances, a through ball, which Sinclair manages to wrap his foot around, which the Dover keeper gets down to and saves well, with Dundo following up. Another fine chance on the offering is a Dale Binns free kick on the edge of the box.

Me, personally a free kick from there. Hit it hard and hit it low, straight through the legs in the wall. Do that and the keeper is blind. Instead, Binns smashes it high, a sign of frustration I reckon. Not having a go, just saying is all. With the added time of 3 minutes we do OK, we hold onto a draw at the Crabble, so it’s now back to Gander Green Lane on Saturday for the 2nd leg. I reckon we did what we needed to do tonight, we all knew it was going to be tight, so we can’t beat ourselves up over it.

Game done, time to get back in the executive cab, and head off into the night. With Firm Leader Greek riding shot gun, I was left in the back with young master Crockett, who was snap chatting some work colleague I think. With the sounds from Dukey’s CD changer pumping, it put me into a sleepy trance.

Onto Saturday, come on you yellows!