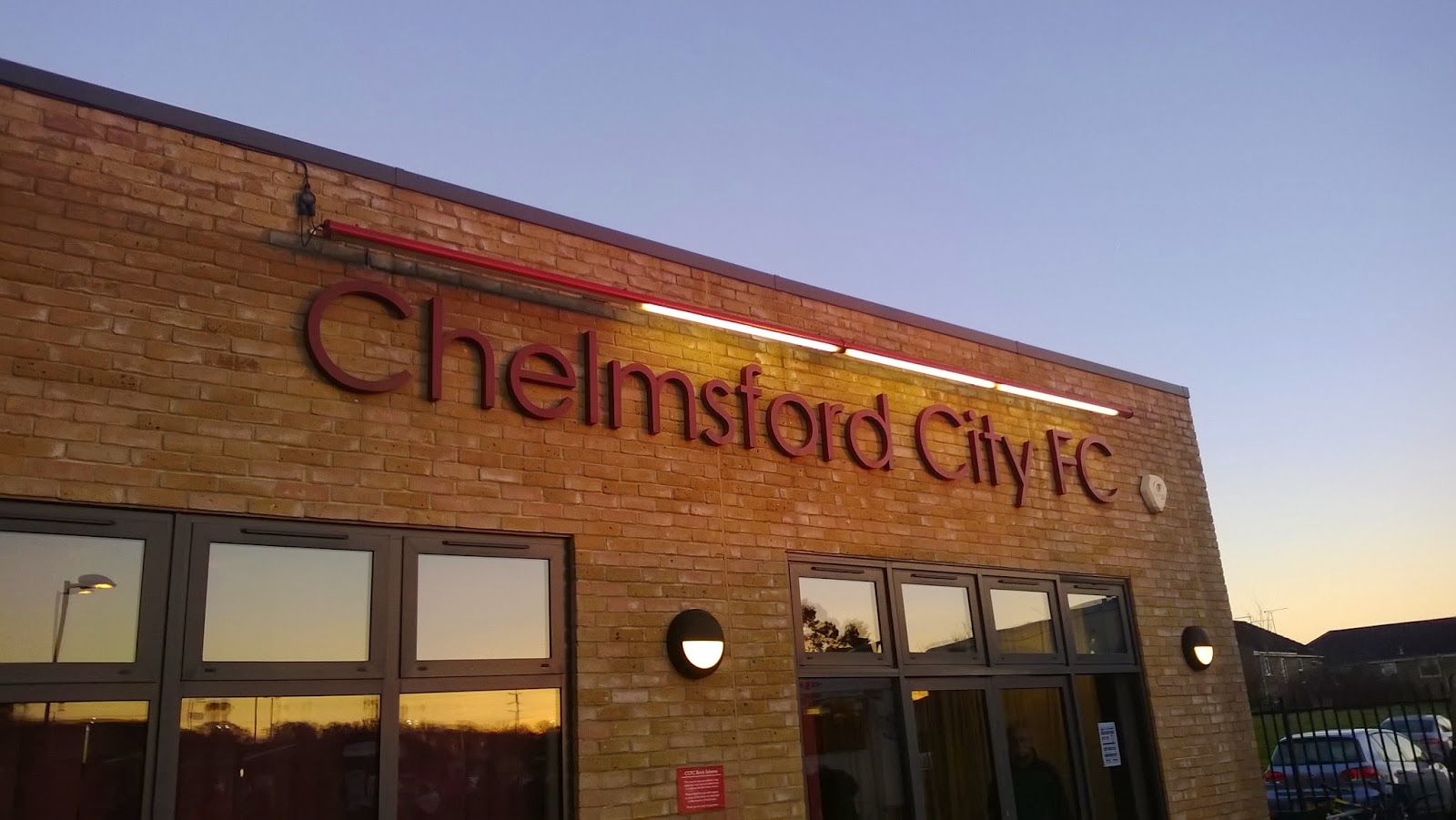 I will have to say that when the fixtures came out in the summer one of ties you don’t really look for is our trips to Essex with much enjoyment. Even though the previous trips to Melbourne Park have been entertaining with classic victories and as some in our Firm call “Top B” with the home support.

The day had started well as the text from Mr X woke me up for the train. A quick turnaround made me able to leave my house at around half eight and meet up with the Editor-in-Chief at the station. The train that we were due to get was at 0911 where we were joined by the Welsh Wizard & Mr X. The numbers appeared to be light today as next Saturday was going to be Tim Vine day at the club before and after we entertain Weston-Super-Mare.

After meeting up with Indy and Sean at Liverpool Street we decided that as it was only ten o’clock we would head to the Hammy Hall for a cheeky pint before the half past train left. The Hammy Hall appears to have had a little face lift since the last time we were here, in fact it looks like some premiership footballers private bar. With our whistles wet we headed towards the train and there was some concern that we all wouldn’t make it because some of us couldn’t get through the barrier in time we lucked in and took the choo choo eastwards. The train did seemed to be filled with QPR fans heading towards Ipswich, but we did get to see the remains of the Olympic stadium where the future championship team West Ham were due to move in. The train finally hit Chelmsford just after eleven o’clock and we hurriedly headed towards our first drink in Chelmo at the Ale House.

Now this little pub under the railway arches is a delectable little place with several Ales, Ciders & Lagers to choose from. In fact there was so much choice we actually didn’t leave this place until it was time to head to the ground. The main highlight of the morning was in our attempt to create what we felt was the best starting team that has graced Gander Green Lane under the tutelage of our leader Dos, the results were somewhat controversial and we went through several arguments and drafts….

The time had come for us to go to the game so we headed to Greggs to get a slice of Tottenham cake, which for the uneducated amongst you is basically sponge cake with a very effeminate pink icing on top and tried to find us a couple of cabs. After paying the £13 to get into the ground we headed to the bar and the news that there was going to be some new boats in the team today. The first was going to be in between the sticks, a Nigel by the name of Gregory. One of the centre backs was called Wynter, and just in front of him was a Taff called Weston. On the bench was also another new lad called Dammy Shitta and let me tell you we spent several hours and pints coming up with some classic rhyming songs for him that I doubt will ever see the light of day.

The match was very much a game between a team in the playoffs and a team struggling above the drop zone. The pitch did appear to be a touch on the heavy side and our boys appeared to have the better ability to overcome the situation. There was really only a couple of highlights of the first half I can recall. The first was a blatant handball in the Chelmo box that somehow the man in the middle decided to give against us for a push, that was not going to be the first strange decision from Mr Harris. The second happened was when a Cloughie thunder shot smashed against the bar after the keeper punched out a corner. The third event happened less then ten minutes later when after watching Slabber ride two sliding challenges and with the speed of a wild whippet ran into the box where he cut the ball back for Leo Sayer to scoop the ball goal bound. Unfortunately it didn’t have the pace in it as it spun towards the goal line. The ball was judged by the ref to have not crossed the line, personally I felt it was a very close decision and like the crowd around me it was very much a fifty fifty split.

I didn’t get to see the last few minutes as we headed towards the bar to refresh ourselves with a couple of glasses of Sherry. Various scores begun to be screened on the telly, news that the boys from down the road were losing at Hampton cheered me up no end. There was also a whisper going around us that Hyde had taken the lead at Southport (ended 1-1). After the annual quick conversation with the sweet seller about why he didn’t sell any chocolate covered peanut brittle we all headed towards the hammer net and the temporary stand that followed next to it.

The second half saw the sun finally hide behind the stand and finally we got some things to cheer about. We did have to survive Chelmo’s best chance when a low shot had to be palmed away by Gregory Peck and then the resulting follow up was well covered. Nelson and Scannell was going to come on at this point and that did change the dynamic of the football. With Binns now able to marauder down the left and his next cross saw it land right on Slabs head who unmarked was able to guide it to the top corner 1-0! It was even nice to see him celebrate with the fans behind the goal unlike to the Eunuchs you see on TV. The rest of the half saw the Harry “Ozzy” Osborne pick another booking with Chelmo never threatening, I didn’t even realise that Shitta had come on the pitch. The final piece of the puzzle fell when after a Binns cross was scooped into the air that eventually fell down towards the keeper and Taylor. A poor punch out which I thought could’ve been caught landed towards Binns who slotted the ball home 2-0! This goal resulted in us “doin the binnsy” behind the goal stamping our feet on the metal steps and going absolutely crazy.

After the game we headed to the bar to organise cabs for us back to town. Around this point I believe that I might’ve purchased a car from a man by the bar. Our next stop was going to be the Queen’s Head where Gandermonium had played cupid last year with one of our members. Much to the surprise of us the barman actually remembered us from the last visit. This is only because he remembered us offering women arm wrestling challenges! We also got to meet some of the local characters and the several dogs that littered the floor. The third and final pub on our tour was the Orange Tree where we debated our options of how to get home. The idea of getting the night bus was disregarded as soon as I mentioned it.

A quite trip back into town followed, only it was surprising how many police were at Victoria station. At some point we managed to get some chicken from somewhere with the most potent garlic sauce imaginable. The Weatherspoons was shut at the station so instead we had to be entertained by a very drunk man trying to get through the barriers to the toilets, even with the help of the local boys in blue did he managed to slip over and drop all his change, talk about spending a penny! We did manage to get onto the right train home and the yet instead of going home we decided to take the E-I-C on his first virgin trip to Tapuri. It was a shame that they didn’t do proper V & O and instead I had to have Vodka with Tango, Sweet.

I do believe that I might’ve been invited (or maybe that was uninvited) to a 30th birthday party by someone. And this got me thinking, why does everyone get worked up about their 30th birthday? We had this a few years ago when Juan Sheet celebrated it. Personally I don’t celebrate it for several more years but maybe I might get like this. Oh well roll on Saturday!