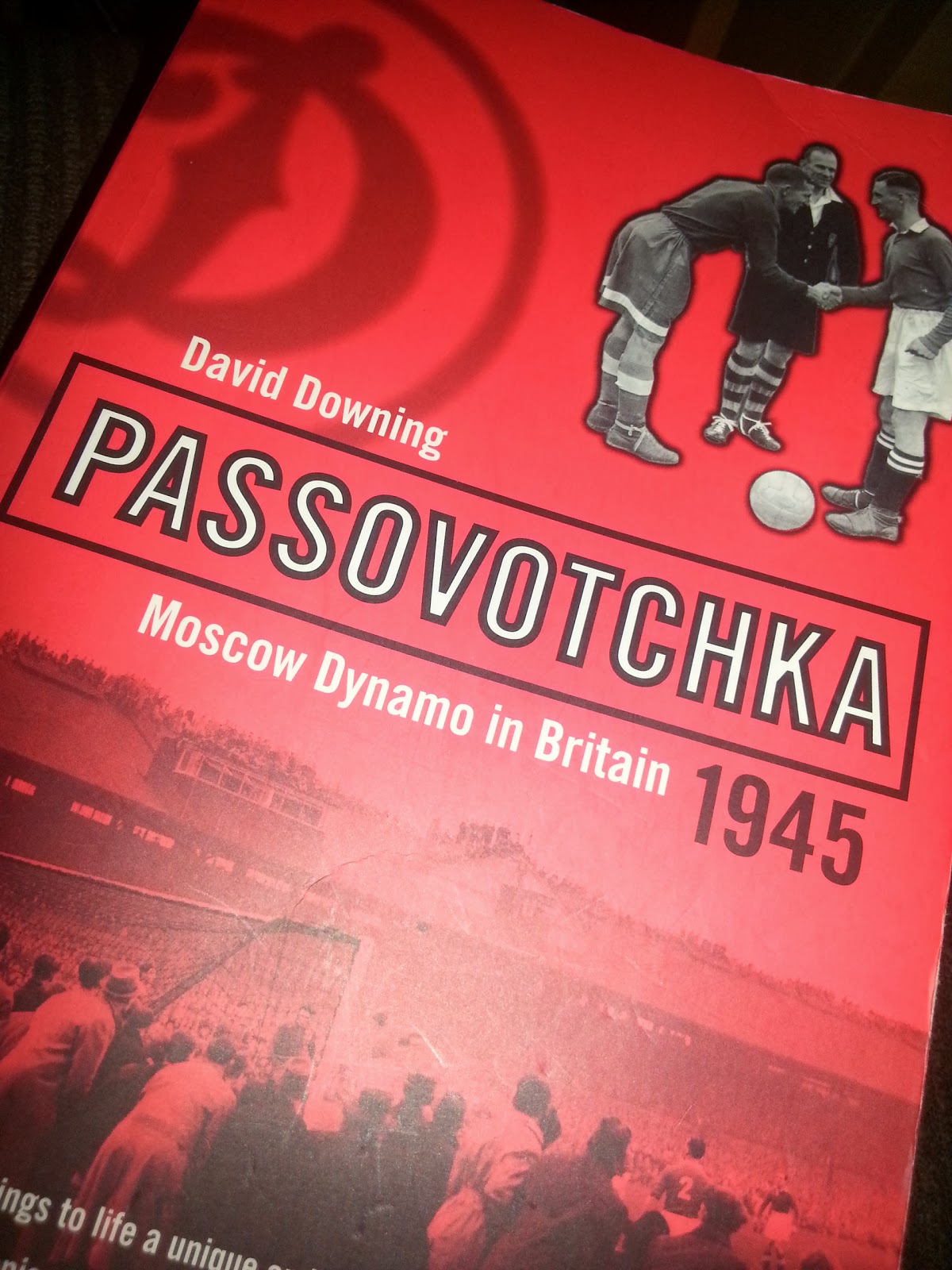 Look, we’re going to persevere with this “Hey look at us, we can read! We’re dead clever and fings!” thing, so you may as well just pipe down and get used to it. Who knows, you might even learn something! Although the thought of us providing anything of educational value other than new swearwords, where’s best to drink in the likes of Weston-Super-Mare and what a shithole Borehamwood is scares even us.

Anyway, onto the latest tome of more words than pictures relating to the beautiful game we’ve selected. This time out, it’s ‘Passovotchka’ by David Downing. Which doesn’t tell the tale of a forerunner or Smirnoff, but the 1945 visit to Great Britain by the Russian club side Dynamo Moscow.

It’s October. The calm following the storm of World War Two in Europe is barely 6 months old, with the conflict itself not even a month past with the surrender of the Japanese in the Pacific. And yet, as Britain stands amongst the ruins, scratching it’s head and blinking through the clearing smoke and thinking “Fuck me, what a mess”, FA Secretary Stanley Rous and a newly appointed ‘Sports Emissary’ from the Russian embassy in London by the name of Revenko are watching Chelsea take on West Ham at Stamford Bridge. And having a chat.

From this, the subject of getting a Soviet team over to tour Britain to help cement relations with our number one bestest Communist buds was hatched. From this follows a slightly confused setup, with several false starts until the 4th November 1945 when the Russian party lands at Croydon airfield in 2 lend lease DC3’s. In true FA fashion, Rous and the welcoming committee had gone to Northolt to greet them. Some things never change eh?

In this entertaining little tome Downing then goes on to tell the story of the tour, giving insights into the British press of the time (who somewhat hearteningly are as fucking myopically stupid and clueless as they are now, so it looks like its an approach Uncle Rupert and his TV bullshit machine have merely polished, rather than invented) fairly detailed reports of the matches they played along with insights from surviving players when the book was written in 1999 and also a fair bit of insight from the Russian side on how they found life in our foggy, bombed out little island.

The tour started chaotically from that first screw up at the airport with the visitors bunked down in a Coldstream Guards barracks for the first night or two, with the FA claiming the late notice of the party’s arrival gave them no time to arrange hotels! Then there was ‘the list’. A selection of 14 points that the visitors wanted the tour to be run by, with such demands as playing on a regular footballing day in England, not playing more than once a week, only facing fellow club sides (which dashed the FA’s hopes of a match against England), oh and they’d quite like to play against Arsenal. Thanks.

The list was soon dismantled as the leagues refused to lose out on valuable income from saturdays and many other points were quickly discarded. Then there were issues with training facilities where one day they Russians used Stamford Bridge, but the following day popped in only to collect their footballs before buggering off to White City. Oh and the balls! The party were given five, more than adequate from the British perspective especially given the post-war shortages in both rubber and leather. But the Russkies were a technical bunch and actually trained with balls, so wanted another half a dozen so that each player had his own.

So with these and many other cock ups blighting the early days of the tour, it was a bit of a relief when the first game against Chelsea came round on 14th November. Such was the interest that people started queueing at the gates around 8am and they weren’t due to open until 1pm for the 2:30 kick off! This soon turned into a torrent and with 20 minutes until the start time, there were some 20,000 still outside the stadium still trying to get in. A lot of them ticket holders who had purchased the previous day! In the end, it’s thought some 15,000 extra managed to find a way into the ground by hook or by crook to see the match. And that’s on top of the 75,000 that were in the ground when the gates were officially closed!

The game itself was almost a precursor of what awaited English football in the 50’s. Fast, technical foreign play being met with strength, speed and a bit of stiff upper lip. Still, having been played largely off the park for the first 20, Chelsea take the lead when England international Tommy Lawton forces the ball from the ‘keepers grasp and sets up a tap in. They then managed to scramble home another to lead 2-0 at the break. In the second half, the Russians hit back through Kartsev and Archangleski but power came through again and Lawton headed the home side back in front, but Bobrov levelled late on and the game ended honours even at 3-3.

Four days later, Dynamo headed to Wales to take on Cardiff of the 3rd Division (South). What followed was a massacre, as having stretched a reasonable 1st Division side to the limit, they tore the hosts to pieces with their fast ‘Passovotchka’ pass & move style and cantered to a 10-1 win. Still, of all the games, it seems they enjoyed the Welsh hospitality the most. Next they came to White Hart Lane to face Arsenal. Or at least a team bearing that name.

With Johnny foreigner displaying more than a knack for this footballing lark, the hosts were now getting a bit keen to put him in his place and as such, the Gunners fielded a couple of guests in their line up. The most obvious ringers being Stan Mortensen and Stanley Matthews. Yes, that Stanley Matthews! Despite this, on an almost impossibly foggy day, the Russians run out 4-3 winners in a rather tense and fractious game refereed by the Russians own official. This is the game of the tour, so Downing covers it and the disquiet from Dynamo about the number of ‘guests’ in the oppo line up in depth. And does a good job too. Even though you can google the result (or er…..read it here) you do get quite involved with how the game flows with all the little battles developing all over the park.

The final match is at Ibrox against Rangers, who despite taking a 2-0 lead at the break tire badly and are eventually pegged back to draw 2-2. At this point, it seems the Soviets decide to get out while the going is good and before the FA can put out a side capable of putting them in their place. The local press are also starting to get a bit ‘British’ about a foreign side putting it about on their soil. So despite the FA’s best attempts to get the tourists to play one more game at Villa Park against a Select XI on the 5th December, they’re on their toes and leave for home on the 7th and a heroes welcome back in Moscow.

Still, the tour had one last moment of farce left in it. The Soviet’s departure date was pushed back 24 hours due to their refuelling stop in Berlin being fogged over. Sadly no one told Sir Stanley Rous and numerous other dignitaries who ended up freezing their cods off at Northolt while the Dynamo’s had a nice lie in.

Overall, David Downing does a decent job and puts together a readable, if a little overly ‘British’ view of this groundbreaking tour. His sources are very good and he has several eyewitness accounts along with having clearly done a shedload of research into the press of the day. If you like football along with a bit of history then you’ll probably enjoy Passovotchka.