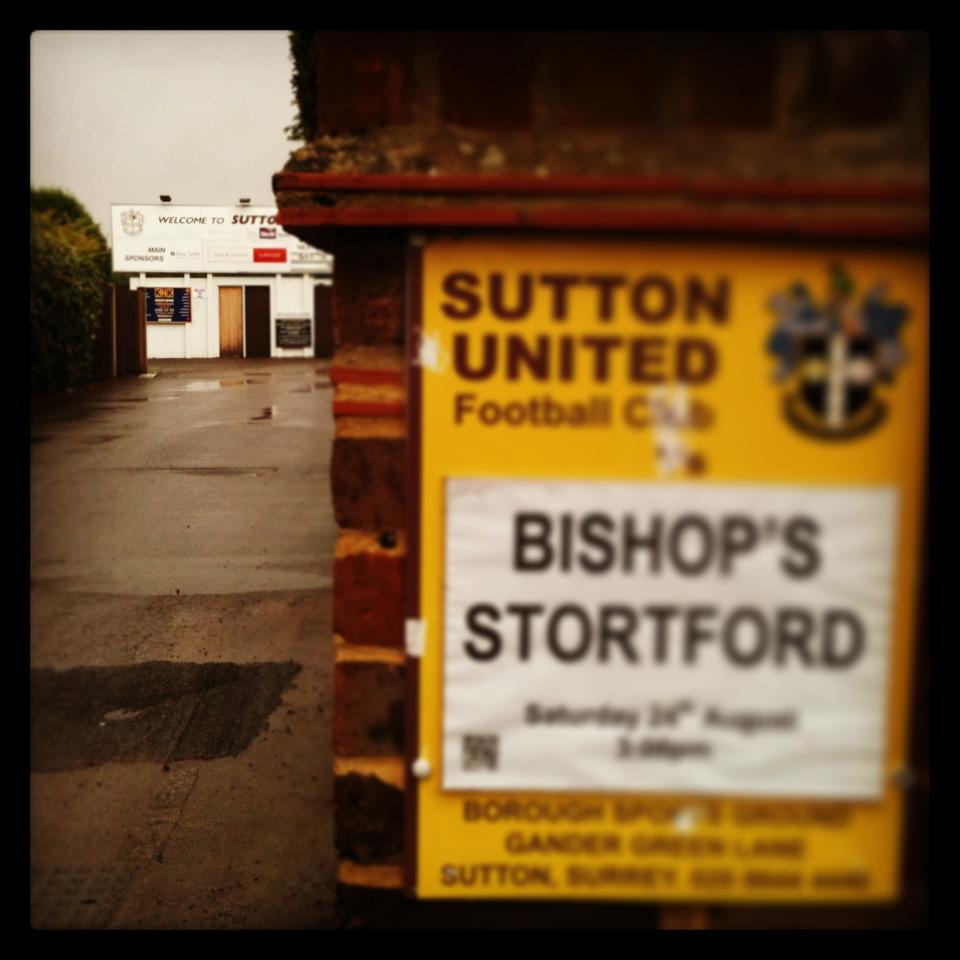 So this Saturday, our home campaign continues, with the first Bank Holiday fixture, we welcome back to Gander Green Lane Bishops Stortford. So we hope that Tuesday night’s current play continues this rainy Saturday afternoon. For those of you that couldn’t make the mid-week fixture, well you missed a banger and a goal fest! We could have had more than we did, possibly 8.

I must admit, maybe I went slightly over board in my last update on Gandermonium, re-the display at Eastleigh on the opening fixture, but what a complete turnaround on Tuesday night eh? Some real quality football on display and well, I think we’ve all now seen the firepower that we are packing, so let’s hope it continues over the Bank Holiday fixtures. So first up is our second home fixture of the Skrill South Season, V.S Bishop Stortford, the second on Bank Holiday will see us take a short trip to Concord Rangers, and I can safely say, that the ‘Robust‘ Duke will be covering this one, so keep your checking back over the weekend for his latest instalment on that one!

Back to today, so the 2nd home fixture brings us, the typical, and yet somewhat predictable British weather…RAIN! There’s nothing quite like standing out, in the British elements for 90 minutes, watching your team.  So onwards to the game.. A quick jump onto the 12:36 train from Banstead Station, a short journey into Sutton, to meet with the Duke, and then onwards to the club bar, to sink a few jars before kickoff.

So with kick off under way, the playing surface could defiantly be described as moist to say the least, every time the ball hits the deck, spinning off. In the first 5 -10 minutes we start to struggle to keep the ball down, and keep playing the long ball, the typical hoof stuff up to Taylor. Still Dundo in the middle of the park, doing what he does best, and brings the ball to his feet, and, and puts in Rents down the left channel. Rents having time and space , sends in a low cross from the Collingwood side, in towards Jamie Taylor, and Stortford keeper manages to palm the ball away, for a Sutton corner. Rents steps up to take, and goes ass over tit, but still managers to swing  in the delivery at a perfect
height, and with pace. The focus is turned to Rents as everyone in the box, looks confused, and the ball flies straight pass every man.  Still Sutton continue to press, this time with Marv looking up, and finding Dundo, once more, in the middle of the park, and with a slide of foot, and trickery, Dundo manages to beat his man once more-sometimes Dundo has these magical moments which keep us entertained, in the dire British weather.

With Rents, in the left back,/ wing back position, again Rents coming forward down the left channel,  passing the ball across to Ali (off his game today) he surges forward, and lays a ball into the feet of Marv, switching his run across the
edge of the box heading in a diagonal direction, turns  and has a poke at goal. Sutton continue to put Stortford under pressure, Rents again running the left channel, swings a cross in, both Dundo and Taylor rising, Taylor nods it back across goal, the ball then comes back across goal, and the Stortford keeper , with a touch of panic throws himself at the ball.

Stortford, begin to press Sutton down the right channel, with Rents out of position, Jamie Stuart takes up a covering position, and brings the Stortford runner to the ground. Stortford awarded a free kick some 5 yards away from the corner flag. So it’s pretty much a corner for the Stort, a poor cross in from them, failing to beat the first man, is cleared away by the cool head of Ali. Ali looking up and bring the ball to Dundo’s feet, Dundo carries it some 10 yards before sending the ball to Taylors feet, a couple of touches from Taylor, and a turn fires a shot from distance, and with the
Stortford keeper narrowing the angle palms the ball away for a U’s corner.

Stortford continue to press, and Lovelock has to quickly come off his line to prevent Stortford from attacking on the U’s goal, in doing so, Lovelock takes a knock and goes to ground. This build up of play, and attack, comes from Folkes loosing possession down the right wing, and not being able to make the yards, to get back into his right back position. With Lovelock back on his feet, Sutton again continue to knock the ball up to Dundo in the middle of the park. Dundo, again coming forward, lays the ball of the right wing, finding McDonald. Mcdonald, running the line, sends in a cross beating the first man, and the ball takes a touch off the boot of the Stortford centre back, and ends up in the back of the net, for an O.G !

Stortford not holding back continue to apply the pressure with some attacking play, but the attack boils down to a shot which is fired wildly over the bar. A further attack from the ‘Stort is blocked and put out for a corner, Stort stick in a floating ball, which Sutton head away, but the ball comes back, and Lovelock is caught out of position and off his  line, Jamie Stuart clears the ball away from the line. Dundo makes chase to the clearance running some 50 yards and chasing down the ball, and with a couple of step over’s beats his man, and cracks a shot, but the effort is palmed away for a U’s corner. Rents steps up, and sends in a out curling cross from his left boot, the tank Dundo rises once more, and connects head to ball, but sadly the effort goes over the bar.

Since conceding Stortford have clearly upped their game since conceding, and continue to press us across  the back, and moving the ball quickly across the deck, and they are still holding their own.

In the second half, things start to go drastically wrong for U’s. Dundo is constantly under pressure as soon as he is on the ball, being squeezed by three of ‘Storts midfielders, not allowing him the time and space, as seen in the first 45, and well the inevitable happens. A lack of concentration, and communication between Folkes and Nelson, a complete  and utter mess up of a clearance allowing Stortford to collect the ball down the right channel, steaming straight pass Nelson, who is standing practically still. Stortford turn into the box, and fire a low shot with pace across the deck beating Lovelock. Lovelock not at all happy with the cock up between Nelson and Folkes, well you can’t blame Lovelock !

Well, we just now seem to fall apart, we can’t seem to string any decent passes together, when we’ve got the ball we just keep giving it away, and resort to playing too deep in our own half, knocking the ball around at the back-in a similar fashion to that seen last season.

Sutton, are awarded a free kick, but yet for some odd reason we knock the ball backwards, yet again giving the ball away in the middle of the park, and well the loss of possession is picked up by ‘Stort, and with a clean strike the fella thumps it, and the ball curls off at the last second straight passed Lovelocks gloves at full reach, and curls into the top corner. A fantastic strike, you can’t deny him that! So it finishes Sutton 1 Bishops
Stortford 2.

So it would seem the continue run of play that we witnessed on Tuesday night ceased today. I know you can’t compare it, Stortford were a lot tighter at that back than Staines, and the playing conditions at times today were a nightmare. But we’ve gotta be doing better than this! I can see a trend appearing. Anyway, let’s hope we see a change of play and attitudes come Monday, where the Dukey , will be covering our away trip to Concord Rangers.

That’s all from the not happy Juan.