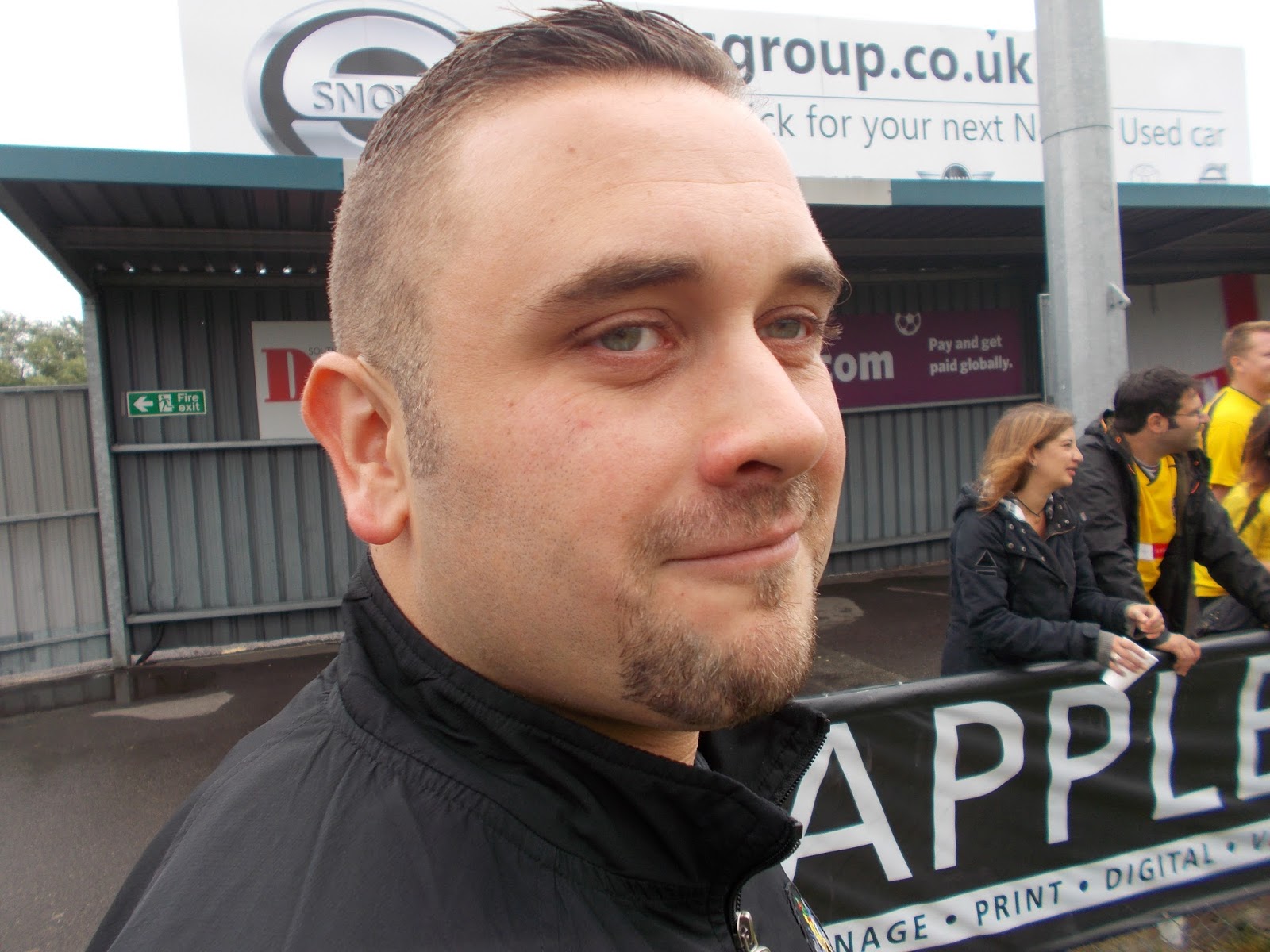 In the blink of an eye last season’s near miss and SSC heartache has been forgotten (for now mind you!), and a new campaign has begun. And where have the footballing gods decided to put us for the opening salvos of the new adventure? Eastleigh.

Well after last weekend’s exploits on the continent it was time to set our sights domestically. After receiving the obligatory Friday night text it was decided that this year there was going to be a slight change to the usual routine. Instead of heading straight to St. Denys and the usual wait outside the Hobbit for it to open we changed it up by heading towards our first port of call last season and the Queens Head in Basingstoke this was after the usual trip of getting the half 9 train from Carshalton to Clapham.

A cheeky pint there was all that we could do in the time frame given as we only had 45mins between trains but it was my first cider of the season and damn it was good! The next job was for one of us to pick up some tinnies for the journey down. Unfortunately the problem is when you send a non-cider drinker to pick up some cider you really are taking a gamble. As what came back was three different bottles of strong strength stuff ranging from 7% to 9%. Which is always good when the train was packed and you are forced to stand all the way there.

As we were arriving at St. Denys an hour later than we normally do we took this opportunity to go to two pubs that we normally miss. The first was the “South West Tavern” that once inside was much larger than it seemed. The first look at the choices of cider seemed promising with the likes of “Suicider”, “Perry-letic” and “Diesel” picked up my spirits. The first was “Diesel” which was a red berry cider (only 7.5%), like a weak Ribena but nice all the same. The second pub was the Junction Inn down the road were the Firm decided to order some food and engage in a nice friendly game of darts. The order of cabs for the 10 of us present was put through at this point, the problem was that there was two cars, one was for six people and the other was for four. As only three people got in the first cab some of us were left in the rain as the heavens had decided to give way.

We arrived at the old Silverlake Stadium to the news that Slabbs had pulled up in the warm up. With the earlier news that Binns wasn’t to play due to injury, the worry was our small squad was getting ever smaller. Straight into the bar we headed for a sickly pint of Pear Bulmers, damn that has to be the worst flavour! And who were we to see in the bar but none other than our fellow Gander Juan Sheet! Yet he still gets me to do the blog!

The game itself was not one of those classics and ended in another opening day defeat for the U’s, A highlight being the introduction of Sutton’s new kit, but the game begun with Eastleigh having much of the possession at the start making Lovelock produce a string of saves, they even had a weak penalty claim brushed by the referee. Much of our best pressure at this time came with Dundo whose sheer size was enough to brush the Eastleigh to one side it was once again only the end product that let us down. the Eastleigh goal came about once again from another set piece as Staurt sent a header over the bar from a Oppo shot, the resulting corner saw a player manage to get in front of Dundo to meet the cross. The rest of the half saw Sutton fail to really mount any sort of decent challenge. The blow of the referees whistle indicated the end of the half and the dash into the bar for a cheeky half time drink

The second half wasn’t no different from the first as Sutton just seemed to fail to create some of the good football we had seen in fits and spurts during the pre season, and Eastleigh were taking their foot as gas as well but maintained there shape very well. It was a shame that they tended to moan a lot and went down light pansies quite easily. The highlight of the game for me was when Stuart went through the back of some poor sod, and then claimed that the fella had fouled him!

Even with the introduction of Folkes and McDonald for his debut didn’t make a lot of difference with us be resigned  to some half hearted shots and some weak corners. Once again it was Dundo’s running that caused the most problems for the Eastleigh defence with the only option for them was to hack him down. But today wasn’t going to be our day and match ended up with the U’s losing 1-0 but I don’t feel too disheartened and look forward to Tuesday’s match at home against Staines.

After the game we headed towards the club bar to discuss our plan of post-game drinking action, while this was happening we managed to catch the end of the second twenty twenty semi final as Surrey beat Hampshire with a well taken four that caused us to celebrate as we left the bar to jump into cabs and head towards the Hobbit for a drink. Of course when at the Hobbit we surrounded the juke box and the first tune of the day was for us to remember our trip to Belgium with the seminal Belgian punk rocking hit by Plastic Bertrand “Ca Plane Pour Moi”. Also to get us in the mood we all decided to increase to the alcohol content by ordering some funky slush puppies that went down very well I can tell you!

The next stop off in our magical mystery tour was to the local petrol station to stock up on some booze for the journey home, the trick is not to drink too much of it before you get on the train. Still we went back to the South Western Arms for us to attack the rest of the ciders we missed on the first run through. It was also the time to try and win some money on the old quiz machine but alas as is always the case it wasn’t to be. The game on the quiz machine be none other than the Chase!

The train journey home went ahead without incident as we made our way back to Clapham, of course we could just go home like that and headed to a local boozer, me waiting behind to see a couple of the firm members off, ended up going to the wrong pub, but eventually met up with the rest at a pub called the Orange something, the drinks kept on flowing into the night. On the way home I did manage to fall asleep on the train but luckily my brethren woke me up as we pulled into Wallington station, yes Wallington station! only a couple of mile walk home for me! I even managed to buy some chips on the way home, I know this because they were in a bowl with some gravy on my bed when I awoke this morning!

Still I wouldn’t have it any other way! Especially since I managed to sit on my new camera and crack the screen, so that lasted about a week.