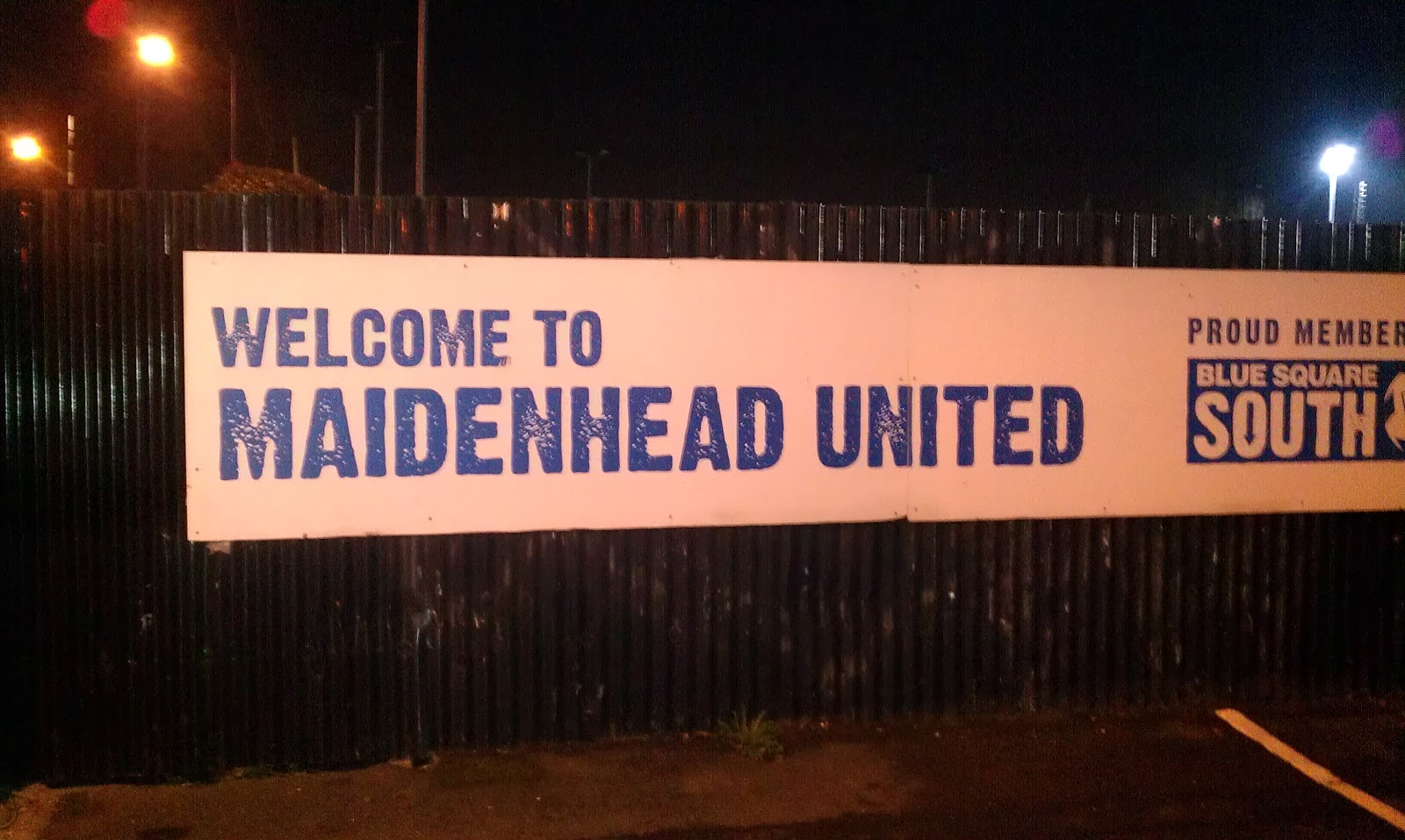 Yeah, a 1-0 win will do us fine. Finally, at the third time of trying, we get to play at Maidenhead and for the first time in around 12 years we make it to the second round of the FA Trophy. Thus on a cold Tuesday night at the start of December we descended on Berkshire to get down to business.

Maximum kudos to Windy for letting me jump into his hairdressers car for a lift that only took a little over an hour to arrive at our destination, which was as per usual the ‘Spoons, but not to the one we were in for the original tie when we found out the game had been postponed just after midday. But the rougher one closest to the ground. A nice pint of cheap cider and a little mixed grill was the first order of the day. Of course this had to be the point that I managed to dribble some mushroom juice all down the front of my football shirt! As other members of this mob arrived, the time ticked on towards the point of knowing we were gonna have to brave the cold that was being swept in every time someone opened the door to the pub.

The game itself was one of those that this season where time and time again we dominated long portions of the game, but where the end product or pass was the one thing that never materialised. The goal we got though happened by Rent Boy taking on the man down the left, his first try at a cross was cleared but his second was deftly poked at by Harry O’s outside right boot that spun under the trailing defender and right across the goal from six yards to nestle into the net at the far post. I couldn’t decide from our efforts who would be Man of the Match, Downer, Harry O or anyone else. I was too cold.

Its was pony to see the ref (Coggins again!) has yet to regain some of the composure that he had when he first reffed us and not for the first time some of his decisions left the hearty away support bemused. How did their numbers 5 & 9 get away with so much? How did he not give a corner for Downer’s 40 Yarder that the keeper managed to tip over the bar? How did he not book the number 6 for blatant diving? These questions I fear will never be answered!

The ride home with the world famous and internationally renowned contortionist Taz squashed into the back of Windy’s hairdressers car was the point when we began to make arrangements for our forthcoming match against Dorchester on Saturday. As usual it was all about what time, what train and how was the best way to get across Yeovil.

That reminds me, Yeovil vs Notts County Saturday… He! He!