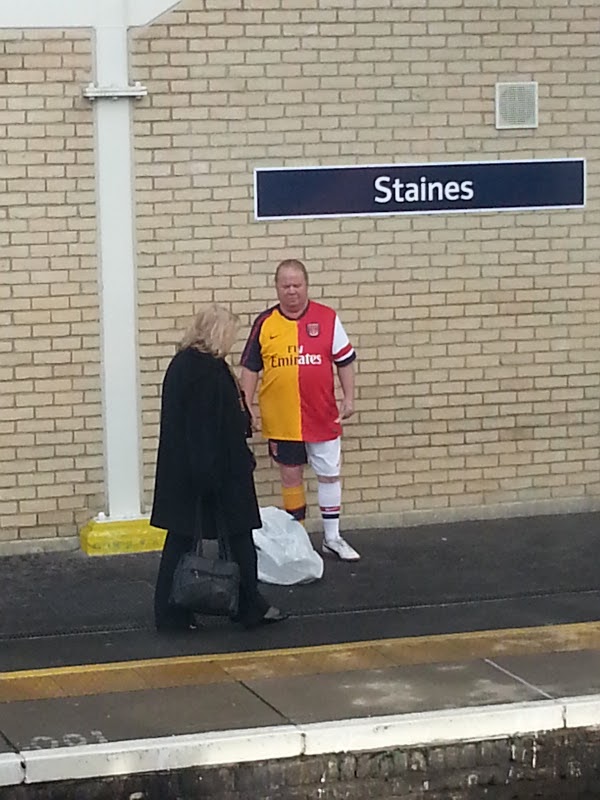 Well what a day that was! Next time I might remember to take some photos. What started with a hot cup of tea at Carshalton station at 10 o’clock in the morning, somehow ended at 2 o’clock the following morning in Tapuri discussing ecclesiastical matters with an Arsenal fan. How did I end up there?

The hour long train trip to Staines would’ve been uneventful if it wasn’t for the fact that the train was packed out with the members of the egg chasing fraternity who felt it was there duty to inform us that there was a game at Twickenham (really??). Then as we arrived into Staines we were greeted with one of those scenes that you hope would not be the highlight of the day because this fully grown man appeared to be sporting a half and half Arsenal kit with shorts and socks to boot as well! no doubt Taz has posted a picture somewhere of it.

(Your wish is my command Dukey! See below. – Taz)

The first bugger of the day was the fact that the pub we were due to go to for some reason didn’t open until One, so of course we dived into the ‘Spoons for several hours to wet our whistles. We even managed to have one in the Hobgoblin, where lo and behold the barman went to Carshalton Boys. How many people do we meet on away days that are from Sutton and have left? And why are we still there?

After reading Juan’s excellent coverage of the game itself there is nothing really to add to that aspect, but it was great to able to celebrate some goals and see our team win. I also thought it was humorous in the second half to stand next to a few wrong end supporters who were more concerned with the Arsenal game than the match in front of them. I did also manage to have a few words with Downer after the game in the Bar, but that will stick with me and Downs.

I can’t believe I left my phone in the cab back to Staines after the game, thank fuck I managed to get it back, otherwise that would’ve been very inconvenient for me. Cost me a fuckin’ fiver though! And somehow we all ended up back in the Falcon at Clapham where we met our illustrious Firm Leader and I am sure I ended up putting the world to rights with some unknown New Zealander, I did think if anyone ever ended up having a curry that night as planned?

And so me and Juan ended up in Sutton where the first port of call was The Treasury where after blagging our way in we find that Juan’s bit on the side had already left and gone to Bounce, so of course we leave without a drink being brought and head to the next drinking establishment where after being told that it was £7 to enter we were further informed that football colours were not allowed in the pub. This of course did not sit well with Juan who went on a power trip about S.I.A. Licenses.

I did manage to get him to Tapuri where I don’t know how many bottles of Beck’s we downed in that last couple of hours but I can’t remember walking home, but I do know my wallet was now very light!

One thought on “In the Beginning God created the Duke”