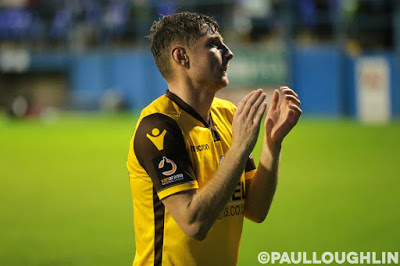 So, with the U’s not so much flying as falling at the end of Part 1, we find ourselves in the bottom four coming into another busy period of the season. So, as we kick off Part Two of our season review, the big questions remain. Can we turn it around? Can we really get any worse? What the hell are we doing with our lives? Yeah, like we’re gonna tell you the answers here. You don’t get off that easily chum! There’ll be no spoilers from us, where’s the fun in that eh?

With a dire October finally behind us, what we really need is a confindence booster. Sadly though, what we’ve got to kick off November instead is BARROW away (1-0). Which not only involves heading to Middle Earth and then doing a left, but they also happen to be top of the league currently. Lovely. Still, the U’s official match preview does it’s level best to rally the weary travelling support by reminding us we’ve had 26 corners in the last 2 games! It doesn’t really work, as you can probably imagine. Still, the lads dig in and provide the league’s front runners with a real test. Sadly though, the same old problems are on display. They score from a wicked deflection, we meanwhile can’t hit a cows arse with a banjo despite several reasonable sights of goal.

Still, the effort’s there and you can tell we’ve put them through the wringer given the relieved, clenched fist celebrations at the end from the home players.  At the end, the weary few who’ve made the trip get stuck into the clearly downhearted side when they come over to acknowledge the support. After all, when the chips are down, do you fold or go all in? Daft question really. Keep fucking going lads. It has to turn sometime. Let’s just avoid mentioning silly bollocks like how many fucking corners we’ve had eh? That night out in Lancaster on the gas, it’s decided that to really make a go of this staying up lark, we’d ideally need to at least be on 25points by Xmas. That way we’d be half way to 50 with about half the season left. Where are the points coming from? That conclusion was sadly lost in a blur of boozing & stupidity. Oh and breaking a minicab.

Being out of the Cup means that we get a weekend off the following Saturday which gives the team a much needed rest and Matt uses the time to ponder his options and make some moves. He’s stuck with the lads he has up to now, but as we said. Fold or go all in? He chooses the latter too and looks to make reinforcements, but not quite in the spots we’d have probably have imagined. First up we clear the decks a little with Crossley Lema’s loan to Leatherhead being made permanent. Then we sign a familiar face on loan, Louis John, who  rejoins from Cambridge United where he’s found his game time limited of late. We assume this is an experienced cover for JC who’s been in and out of the side with knocks all season. Either that or finally a replacement for Dale Bennett at right back?

After the brief break, we return to action by getting the Surrey Cup started, facing HORLEY at home. A fairly strong side is put out and the inevitably see off the County League side 3-0 without really breaking sweat. The side features our 2nd choice keeper Ben Dudzinski making a rare appearance and marks the return of Wayne Brown after his ACL last season, the midfielder opening the scoring in his 60 minute cameo, much to the delight of his team mates. The following day, there’s more movement on the player front with Nik Tzanev, a 6ft 5in keeper signed on loan from AFC Wimbledon. Jamie Butler’s not been at his best this season and seems like he might be struggling with an injury, so Matt’s gone big to cover him. Naturally, this means Dudzinski is surplus to requirements and he heads off to Gosport on dual reg to make the neccessary room.

With the pack shuffled slightly, we head to TORQUAY for Dirty Barry’s Porno Pool Party Weekender and some National League football. The hosts are ticking along nicely with 4 wins in 5, whilst we’ve not won since September, so a tough afternoon is expected. What follows is a gritty, battling performance all across the park in welcome and well deserved 2-1 victory. Ajiboye gives us the lead before they level, but Harry adds to his ever growing tally with what proves to be the winner in the second half. Fucking finally, a win! It’s a big one and the reaction of the lads and management at full time shows what it means to the group. Right, let’s build on this you bastards!! Naturally, this sorely needed win is celebrated long into the night, which helps us forget that the Gandermonium travel sec has once more bought our tickets for the journey home for the wrong date. Twat.

Dan Matsuzaka departs before the following week’s game with BROMLEY, eventually winding up back at Braintree. The clash with our old isthmian mates is tight, but the difference is chances and mistakes. They take theirs and we make them. With the game finely balanced and Sutton looking hard for a leveller at 1-0, JC lets the ball roll under his foot and moments later it’s 2-0 & game over. Arse. Has that momentum and morale boost from Torquay been killed by another unfortunate defeat? I guess we’ll have to go to DAGENHAM (2-1) midweek and find out! The Daggers have had a funny old season, starting poorly, then racing up the table before slumping back into the bottom half again. We’ve also been drawn at home to them in the Trophy in a couple of weeks too, to no-one’s excitement at all. They lead at the break, but the lads stick at it and the game turns within a couple of second half minutes. Easty bundles in an equaliser and then almost straight after, Tommy Wright shows some of his pre-injury dead eye finishing to rifle home and nick the win. Seems there might be some life about us yet!

With two wins in three games now, we welcome play off chasing HARROGATE to the Lane. Our tails are up though and we give them a proper going over for an hour. Sadly though, we’re only the one up when the inevitable error arrives and they nick an somewhat undeserved equaliser. Thankfully though, we keep going. Tommy Wright again to the rescue, this time lashing in a 25 yard thunderbastard to restore the lead soon after and then settling everyone’s nerves with a couple left to seal a well deserved 3-1 win. Three wins in four and suddenly we’re no longer worrying about getting cut adrift in the bottom four, but firmly back in touch with the pack immediately above. 21st spot and that magical 25 points we’d dreamt of post-Halifax is up on the board. It seems we’re actually a bit ahead of schedule chaps! Maybe it’ll be a Merry Xmas after all?

During the week, the squad gets a boost as Louis John’s return to GGL from Cambridge United is made permanent before we then return to action at GGL with the visit of SOLIHULL MOORS, who thoroughly endear themselves to the PROWS citizenry with some pretty dour shithouse wankery under the charge of former Blackburn & England ‘keeper Tim Flowers. Again, it’s our profilgacy in front of goal that costs us (0-0) what should probably be 3pts against a play off chasing set of cunts. Still, it keeps the points tally trundling upwards to 41 and with there likely to only be 3 down this season, leaves us needing really only three wins to be sure of safety.

With David Ajiboye having settled nicely as the season progressed, the U’s management return to the South Coast and add striker Callum Kealy from Worthing on a dual reg for the remainder of the season, clearly looking to get some more talent on the cheap. Obviously room needs to be made and Aaron Jarvis is the one to make that room, heading to Hemel Hempstead on loan. Back on the pitch, January ends with Dukey’s now annual Surrey Cup disappointment as a largely Academy based side comfortably loses 3-0 to LEATHERHEAD down at Fetcham Grove. The highlight of the evening is undoubtedly Totts blog covering the match, which finally details an oft threatened tale of him and a disco dancing contest in their old clubhouse back in the 70’s. Yep, the game was genuinely that good. But enough of such frivolity, onwards my friends into February and the final third of the season with a chunky feeling 41 points tucked firmly in our pockets and our arses squished into 15th place in the National League table.
Now, what’s all this stuff we’re hearing on the news about a nasty virus that seems to be causing problems in a far off Chinese city named Wuhan? That doesn’t sound fun at all….

As always with these reviews, we’d like to thank the jolly good sport and rather good snapper of images that is Paul Loughlin for once more allowing us to plunder from his impressive library of pictures for this rubbish & to help make it  look far more professional than we could ever hope to with our own stuff. Check out the full sets of his work on Flickr HERE. They’re dead good and have been in the NLP and everything. Cheers!