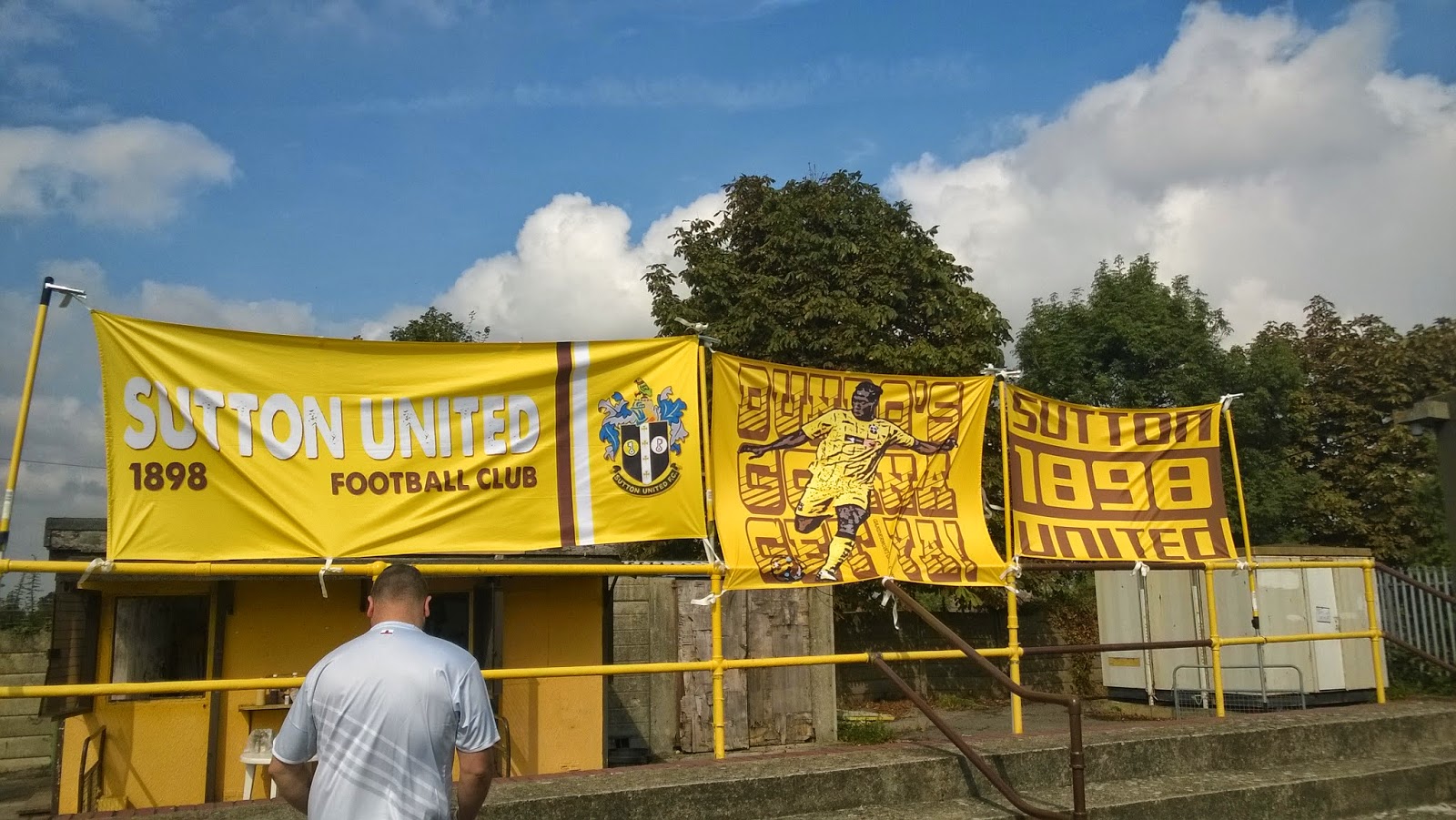 A tourist is in Sutton one Saturday and he decides he would very much like to go to a football match, so he asks a man in the street if there are any local matches being played that afternoon. “Well,” replies the man, “The Sutton United ground is very close but they’re playing away today. If you feel you must really see a match, the Carshalton ground is not far away. You go straight down this road and you’ll see two queues, a big queue and a small queue. You should go to the small queue because the big one is for the fish and chip shop.”

With our win on Tuesday night down on the Sussex coast, today’s game against the Staines Massive gave us the opportunity to make up more ground on the leading teams. And after going from near the bottom to near the top after only a couple of games, it shows how close this league could be with every team dropping points early on.

A surprise call from the Firm Leader on Friday stating his intentions to get down the club slightly earlier meant we were to get the 1230hrs train to West Sutton. With enough cigarettes to last until Christmas after the Portugal trip, all I needed to procure for the day was the usual dollars out of the hole in the wall to sustain my drinking habit. The Firm Leader was already at the station waiting for me to arrive, ready for the off.

The trip was quick and easy and we rolled into West Sutton without any hassle. I was not only surprised that Day’s was actually open for a change, but who did we see sneaking inside? Only Fatty Arbuckle’s love child himself, Juan! Who appeared to be buying some snouts. Which I thought was odd as he’d surely brought some back from Portugal like me? Turns out he was just buying some ketchup for Rose’s as they’d run out and Mr X had forgotten it with this week’s shop.

Arriving at a quiet club there was a mysterious exchange of a parcel for money between myself and a unnamed member of the board. Deal done, it was off into the bar for a nice cold pint of Bulmers. Most of the conversations before the game were about exactly what had happened on our recent trip to Portugal. You’ve already been given the taste of what football abroad is like in an excellent account from Taz, you’ll just have to wait for the second part from Juan to see how silly things can get between us lot afterwards! Let’s just say it seems the sun got to a few heads that day.

I was forced to help Juan with the flags for the Shoebox in between copious amounts of alcohol before the team line ups were put up on twitter. I was surprised to see there was no Taylor for us, even on the bench. But the team ready for battle was:-

Now does some someone want to tell me what the fuck happened in the first five minutes? Two fuckin’ nil down before the rich folks had even sat down. Now I really didn’t see the build up to the first goal because I was still making my way round to the Rec End. Next thing I now I look up and there fella is heading the ball into the back of the net.

Before those of us behind the goal had time to digest what exactly had just happened we were two down. The ball had rolled back to Cloughie, who instead of giving it the heave-ho, decided to try and be smart. Unfortunately once in a while that doesn’t work and he was easily dispossessed and after failing to catch up with the fella he had time to see his shot saved but was another geezer there for the tap in.

You think that would be the end of us, but credit to the lads we came back at them. It was less than ten minutes later we got our foot back in the door. The manly legend that is Dundo once again stepped up to the plate. I really do think he might end up being our top scorer again this season you know. Collecting the ball just outside of the box, Dundo dragged it goal bound where with the outside of his right boot curled it into the far bottom corner of the goal. 1-2!

That might’ve been the signal for the comeback but Staines had one more try at goal that was well saved by Julian. Next came Sutton again with Jessy just being fouled outside of the box. The resulting free kick from Micky was probably a tad too close to goal as his shot was not good enough to find the back of the net.

The circle of life was complete when Southam crossed in the ball from the right hand side. As soon as the defender missed the ball and it fell to Kane, I thought to myself that this was it, and I wasn’t disappointed because Kane lifted the ball home to make it 2-2. The rest of the half saw Sutton rise further into the ascendancy but we failed to get the breakthrough that would put us in front.

Hitting the bar at half time as usual had me miss the players coming back out for the second half and also nearly missing another goal. As I emerged, I saw Jessy win a free kick way out of the penalty area. By the time I’d walked past the club shop I saw Jacko take a run and hit a crisp strike that just glided into the goal. 3-2!

“They like to intimidate but it doesn’t wash with me”

Forty-nine minutes into the game and we were finally on top. Ten minutes later, the comeback was complete and the game was over. I still don’t know why Jacko was that far up the field in the first place, but after collecting a simple pass through from Dundo and he took his time and slotted the ball neatly into the back of the net. 4-2! Next came the subs with Dundo, Jessy & Kuffour being replaced by Binns, Bignall & Williams for some fresh legs.

Sutton still weren’t finished in this match and carried on creating chances. The amount of crosses and passes that just went slightly over or were poorly controlled would probably be a cause for concern if we hadn’t already knocked four goals in against a load of shite. So all in all not a bad result in the end after a bad start. I really can’t find fault overall but without starting to sound like a broken record, it’s the individual defensive errors that need to be worked on and got rid of. Still, we’re now sixth in the table and only one point behind those in the play-offs, so it ain’t all bad.

” You see where they throw their money. It’s all on the pitch, it’s not the surroundings”

After doing the nets and taking in the corner flags I headed into the bar for a well earned pint. With Adrian not about the Strikers Are Key draw was going to be drawn by a mixture of Our Lord Dos and Double Barrell. Needless to say we didn’t win again and the safe wasn’t opened either. Meeting the players after the game gave me some of a better prospective than otherwise would’ve been available. Speaking to Julian he felt that another player touched the ball before it crossed the line for the Staines second goal.

Several beers later we headed towards Sutton and KFC for a try out of their new pulled chicken burger. Then several more beers at the Grapes and with me busting out some of the funniest jokes around, this caused Taz and Mr C to make a quick exit before their sides split. Then the remains headed towards the other ‘Spoons and then further on to O’Neil’s and possibly the worst singer we’ve heard since whoever was number one last week.

After this it was finally decided to call it a night and get some beauty sleep as next weekend we are away to Gravesend & Northfleet and the scene of our little ‘issue’ with the British Transport Police last season. Lets just hope that the weather will be a lot better than the downpour we suffered last time around, as well as the fuckin’ result.