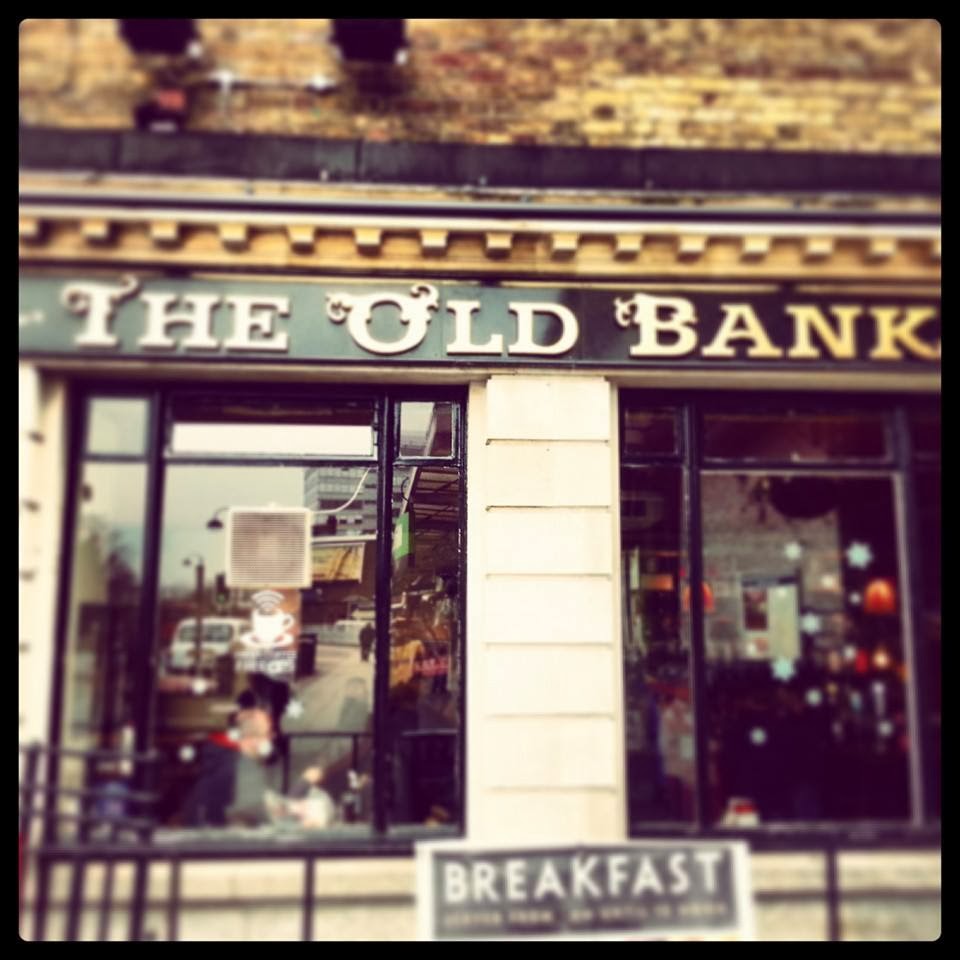 Good evening religious readers of Gandermonium. For those
hardcore readers, you will have no doubt noticed that our Editor in Chief gave
you a fine write up of the thrashing of Carshalton some ten years ago. The
thrashing even spawned a t-shirt! It’s not often that will happen in history I can
tell you. So that now leaves me to cover this year’s Boxing Day write up, our
home fixture against Hayes & Yeading, but before we get to that, we have
some other news to cover.

I made the mistake of inviting the Duke over for Christmas
Dinner this year. Well I reckon he enjoyed himself, in fact I know he enjoyed
himself, he drank me out of house and home! For a man that sticks to Cider on
most home and away day ventures, the man did well sinking a number of Nelson Mandela’s,
as well as sucking back the Italian specials, bottles of Peroni. Adding to that
he insulted me on Boxing Day morning, for not adding enough bacon, to his
cooked breakfast. The man has got more front that Katie Price. Fear not though,
I got my sweet revenge, Duke slept on the floor of the West Wing of Juan
Towers. Well enough of the chuff, and onwards to Boxing Day.

A text arrived via the shit service that EE offer covering
the hills of Banstead, from our illustrious Firm Leader The Greek, with details
of the meet on Boxing Day. Something along the lines of get yourself to Sutton
for midday, and we’ll do a little crawl around the pubs of Sutton. Hmm well there
were two options here. Option A- get a cab from Banstead to Sutton, and have a
few throughout the day, and then cab it back in the evening. Now bearing in my
it was Boxing Day, and cab firms around these parts charge a fortune at the
best of times, I didn’t quite fancy re-mortgaging the West Wing of Juan Towers
for the ride. So options B- drive myself and Duke to Sutton and stay on the
Diet Cokes all day. Well, yeah you guessed it option B it was. So myself and
Duke set off, down the ‘mad mile’ and parked up in B&Q, and ideal free spot
of parking, thank you very much!  A quick
walk up the cobbles, picking up some tobacco sticks en-route, and we arrived
outside the Old Bank, early of course.

In fact so early that the main doors
where still bolted shut! Bollocks, this is the 2nd day in a row,
where we’ve rocked up to a pub before it’s opened for business! Either my watch
is bloody fast or we’ve got a serious drink problem. I think we can all agree
on the later! Well some of us anyway, *cough* Duke * cough*!!!

Seeing as Duke had the Juan Christmas Experience; he could
at least buy me a Diet Coke. As he approached the bar, and ordered my non- alcoholic
drink, even the bar lady sniggered and laughed at my expense. I could see the
look in her face, a Diet Coke, who are you trying to kid!  Anyway a few minutes passed and Mr X and the
E.I.C purchased their drinks and took a seat, shortly followed by Mr & Mrs
Greek. The conversation then turned to last weekend’s drinking carnage up in
London, and the cost of a black cab to get home, the cost of a Premier Inn
Hotel room for the night, or the night bus home, and well yep you guessed it
the night bus was the option for those hardcore amongst us. Well if you haven’t
had a read yet, what are you waiting for, get to it!

Loffers, and Chalmers
soon arrived a few minutes later. Chalmers, not given a chance to order himself
a drink, as we were off. Onto the next one as they say. Turning out of the Old
Bank we headed Due South, crossed over the one way street and stumbled into the
Cock and Bull, the 2nd pub of the day. Now the Cock and Bull brings
back some rather good memories for me, drinking as a teenager, fake I.D, and
being daft! Oh those were the days, bragging your way into pubs with a fake I.D
that was piss poor, the bouncers must have given me the sympathy vote and
allowed me access to the booze. Plus if my memory serves me write, my sister
worked in the Cock and Bull for a short stint under what was then the landlord/
owner a fella called Dustin. Jesus, I’m surprised I’ve been able to remember all
that, looks as though the Alzheimer’s has quite got a hold on me just yet!

The atmosphere went from chatty to silence in
a number of minutes given that Hull were playing the Mancs on the telebox, and
well our attention was fixed to this game. Hull taking an early lead, and then
scoring again, putting the Mancs on the back foot, until they come back to 2 a
piece with a strike from Shrek! Glasses empty the next drinking establishment
on the list was to be the Sutton Arms. Leaving the Bull, you chuck a right and
again head south down the High Street, once more crossing the one way system
that cuts straight across the High Street, some 20 yards later, and bang you
are there!

A quick chat with Mr X outside the pub, with regards to this year,
New Years Eve party plans, and I stepped inside to once more obtain a pint of
Diet Coke. Now bearing in mind by now, I must have had roughly 5 pints of Diet
Coke, I needed to drain the tap. I tell you, standing at a Urinal for that long
is not natural. Joining the others back at the bar, Greek piped up, and asked
me if I wouldn’t mind giving him and his Mrs a lift down to the ground. Greek
not fancying a walk in the cold. Of course being the gent that I am, I said
yeah, no problem. So we left the group, and headed for the motor, jumped in and
drove down to the ground.

My first task on arrival at the ground was to locate
Mr Baker to collect the shirt I had purchased a couple of weeks back. Now when
I say shirt, I mean signed shirt, signed by players and management. A little
gift for our man Igor out in Serbia. A little trip has been planned for May
next year, so watch this space on that one! With shirt carefully packed away in
my North Face Jacket, my attention turned to the new cider on tap, in the Club
Bar. Hmm the jury is still out on the flavour, and the after taste. Now,
considering this was going to be the only drink which contained alcohol that
was going to touch my lips today, I should have gone for the trusty and
reliable Bulmer’s.

Onto the game. I paid my £12 due to Clive , and took my
stand next to the tunnel.

A quick clap for the
team, and I made my way round to the usual spot, around the back next to the
Collingwood Entrance, not to far from Juan Step to join the rest of the mob. We
always stand here on most home games in the first half. A bit daft really with
the low sun directly in our eyes, still fuck it! With the first half under way,
the thought had crossed my mind that this could be one of those games
potentially lacking decent ball on the deck attacking football. An obvious
thought there, given we had a shed load of rain the night before, clearly
effecting the playing surface. Sometimes my grey matter lets me down! With a
sticky pitch, we were trying to keep hold of the ball, to feet, with short triangular
paces, but with not much occurring in the final third. Binns doing what he does
best attacking the left flank. But a special thanks and shout out must go to
Hayes for warming up on the channels, even though they had been advised not to!
So yeah thanks for churning up the pitch!

Pressing forward, we created some decent chances, Slabbs
just slightly miss timing his run. But pressing close to 40 minutes, Dundo hit
the post, which returned out towards Slabbs, but Slabbs couldn’t quite make the
turn to latch onto it. With half time on the cards I headed off to crab a
cuppa, and a bite, and then headed towards to the Shoebox, for the 2nd half. The usual crowd followed, and joined in with the 2nd half
bantz. The ref and the lino getting the usual dosage of funny abuse, and Duke
with his trademark shout of Justice! During the 2nd 45 we looked a
lot better. I must say the chap that has come in on loan at right back to cover
for Nelson, whilst he serves his ban, looks decent, great awareness, and looks
solid. With most of the crew on the Shoebox, pulling out the Golden Goal
tickets, to see potential winners, as luck would have it Scans bursts through
the middle of the park, and with great strength goes past 2, and continues to
find space, and just inside the box, smashes the ball past the man in the
sticks, and we go one up! Happy fucking days. A little relief for most, and a
celebratory fag for the rest. Hayes now reduced to the tactical hoof over the
top, Clough doing what he does best, sniffing out any possible chance, and
covering other positions too! A few changes in personal for the U’s, and a
further return to First Team football for Marv. Nice to see him back after all
this time.  The second goal for Sutton is
from a ball over the top from Ali, which Marv eyes up, and whilst under
pressure brings the ball to his feet, and using both pace and strength goes
past his man, and slots it into the back of the net. Well that’s what you call
an impact sub! Sweeeet! Five minutes of extra time, are seen out, and the
final whistle is blown, points in the bag, and other results go our way too, so
back up to 4th in the league we go.

Time for a drink, is the shout! Yeah great another Diet
bleedin Coke! So the masses head off to the bar, for a good reason it’s
Strikers Are Key Draw, a massive £900 large could be going home tonight. Drinks
ordered, and draw under way, Scanners fails to pick the right key for the lucky
winner, so the £900 large stays in the safe for the next home game, plus an
additional £200. Following the draw myself and the E.I.C are approached by
the Guvnor Dos, and we are asked why there is such a lack of atmosphere at home
games, and well we give him the answer, which I think he knew anyway, but we
gave him the street version, and well his response was I’m with you! Lets get
this going again. Oh yeah and may as well add he loves the away support and
noise too, well that’s cause we’re all pissed up by the time 3PM arrives!

So job done, 3 points in the bag, time to fox trot Oscar, I
turn to Duke and tell him to get his bag out the car, other wise it’s coming
home with me, and I’m away. With the key in the ignition, my phone rings and
it’s only the E.I.C he needs a lift, to Wallington, and quick! A family
function or something, so I give it the full 3 over crest down the back roads
and drop him at his destination, and head off home.

Does Diet Coke give you the two bob bits….? Thank the Lord for Baby Wipes…