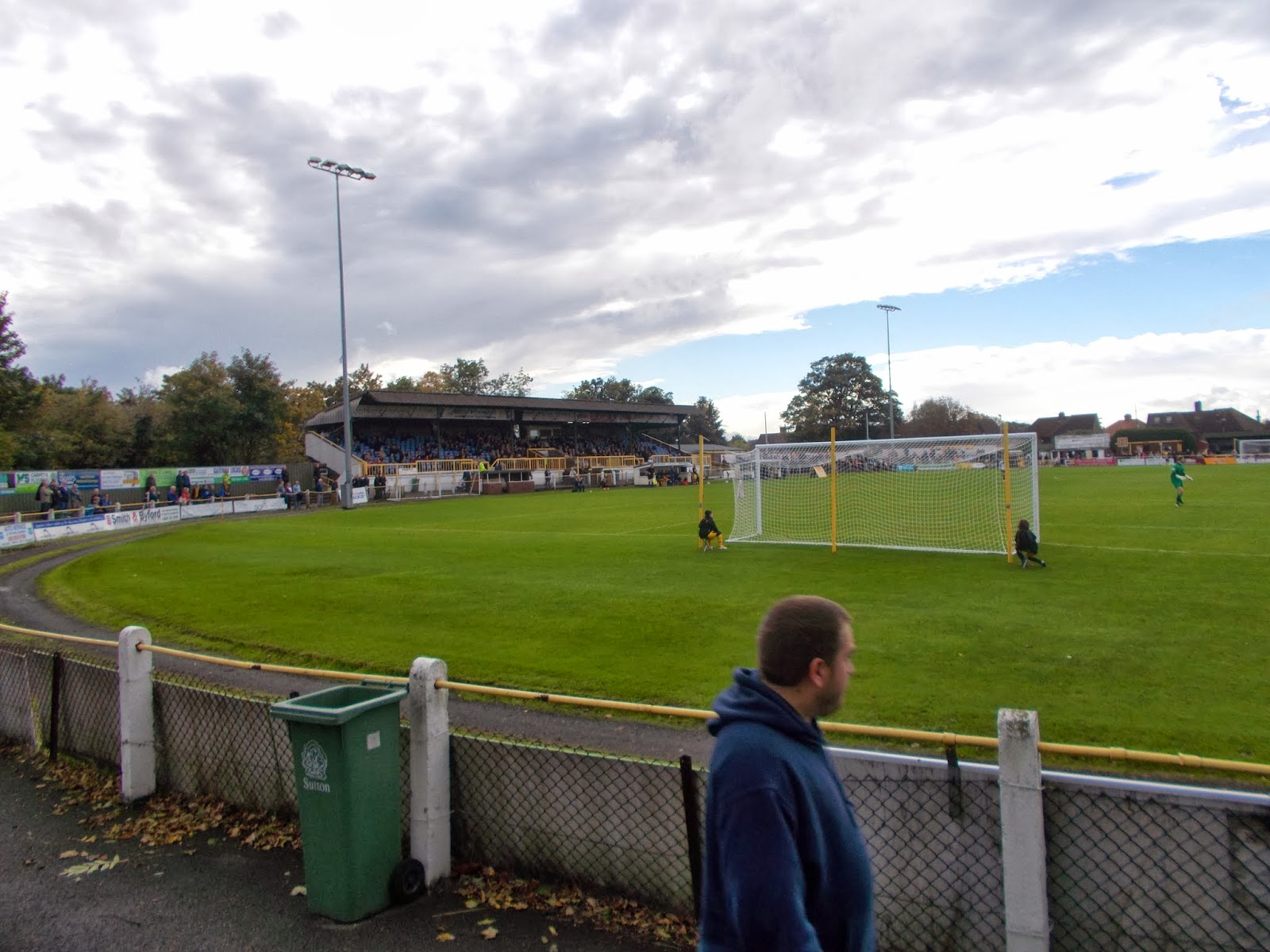 That title was suggested to me by my new neighbour, and don’t you worry kind sir I will be around to get a cup of sugar just as soon as you move in.

Well that’s another week closer to the end of the season and what has happened? Nothing! Absolute bupkis! Totally forgettable! There was an England game up at Wembley on the Tuesday night that saw the boys qualify for Rio 2014. But I missed the game as I was next to the Post Office tower at the University of Westminster.

Wednesday we were supposed to be down at Gosport for a league match and I would’ve made the train journey down there but as I was needed to go down to the quacks I was forced to drive. On the flip side to that as I left the quacks I got a text message from the Editor-in-Chief saying that the game had been postponed. Touch I thought to myself so I replied to him thanks and asked how far down he got on the train. The reply cannot be published as it contained too much abuse! Suffice it to say it cost the old boy over £60 for a game that never happened.

Also there was the news filtering through from the Sussex coast that apparently there was something committed by the travelling supporters last weekend. Of course the Sussex police had to change the day it was committed from the Sunday night to the Saturday half way through the week and then produced two grainy photos of the suspect. For a time the finger of suspicion fell on Duke’s head as the criminal was described as “aged 20-25, slim build, short cropped hair”. Well that’s me down to a T the only thing missing and the bit which let it all down was the non mention of the assailant wearing a hat. Apparently the Sussex police are yet to do what was on the BBC website and that is to contact the club regarding this accusation. Because I for one would like to know how they believe this was done by Sutton fans.

Well that’s enough bollocks for now so let get on with Saturdays game against Bromley. The day begun with the news that once again I was to do the blog as Juan was going to plough a field so he would not be attending the match. The second absence was going to be the Firm Leader as he was going house hunting, but luckily enough he was going to hand over his season ticket to me before I left for the match. The usual train journey passed without incident as I made my way to West Sutton station. As I arrived the weather appeared very drab and dreary, as the rain fell I solemnly made the walk to the ground.

Lucky for me that I wasn’t going to be on my own as Burgess was there and Mr C was already at the bar, so I just simply asked for a Bulmers as that how all this day start. That was at a quarter past one and as the Newcastle Vs Liverpool was on the box I waited for the others to arrive. First were Mr X and the Editor-In-Chief quickly followed by Mr Wellie and then the Welsh Wizard with his brother. The beer began to flow with the conversation going from the “incident” last week to what was going to happen next week. Of course at this time the game on the box was reaching it climax and one particular piece of play was being replayed in the bar by the Editor-In-Chief not realising that Chalmers had put his pint on the floor to mess about with his phone, two seconds later BAAM!!! and the pint goes down. Now someone has to clean that mess up…..

The match was one those that won’t last long in the memories of those that attended it but the 894 that were there will have to bare that themselves. The first half was very much a scrappy affair with both teams playing with strong defences and a lack of any real chances for either team and in fact the highlight of the whole first half was Mitch’s out of the box shot that seemed to be heading into the safe hands of the keeper when he flapped at it and it nearly went over the line much to the dismay of those of us behind the goal. The last action I saw of the half was a Rivs shot that as soon as it left his boot was hit too straight and sail wide of the mark.

After wetting our whistles and seeing that the Firm Leader had turned up we headed outside for the second half in the hope that the game must change course and just as I had made it out of the tunnel I saw the Bromley attack that was gracious saved by the every dependable Lovelock in goal. I had finally made it to the Shoebox when I got see a run by Slabbs down the left wing who managed to get a cross in that Nelson failed to connect properly with his head and after a couple of stabs at the ball it managed to fall to Dundo who decided to take on the left back. In succeeding this and just before the ball ran off the pitch, he hit a low cross in the six yard box that was met first by Slabbs who’s silky back heel turned the ball just inside the far post 1-0! I managed to jump up in the air in delight and shake my fist at the other end. And as tradition dictates I looked at the golden goals that I’d purchased before the game. The first read 70 minutes and the second which intrigued me was at 48 minutes and as I saw on twitter the goal was 48 minutes. Yes I thought, result only then was the PA system saying 49 minutes, Bollocks!

The rest of the game saw Sutton really try to force the situation without any result, and any Bromley attack was quickly snuffed out. We even got to see the introduction of Cloughie coming on in the last few minutes as an orthodox striker and even he had a chance at goal but like any defender he just blasted it into the keepers legs. There was also a last chance for Bromley to take something home with them other than their group of clearasil smelling pre-pubescent ruffians. As in the last moments of the game an attack down the left saw the ball end up with their attack alone in the six yard box but instead of hitting on the spin he decided to try and control the ball first and this was enough time for Lovelock to dive at his feet. After that the ref blew his whistle and there we had it. Not only was that our sixth consecutive win but also our sixth consecutive clean sheet and because of that I would have to say that my man of the match for the game was either Downer or Stuart.

The bar was the place where we were to head to after the game to get the results from around the grounds. We knew that we were going to remain third but only a point behind Bromley, it is a shame that Eastleigh beat Staines by the same score line but we’ve got them in a fortnight down the lane. Several beers were to follow this and our attention was quickly to turn the television as Celebrity Pointless was on and we needed to exercise some of our grey cells. The programme was to finish and next on BBC One was to be Come Dancing and the heads of most of the males heads were to turned to the debate Rachel Riley or Susanne Reid? Of course this was the point for Mr Chalmers to change the channel and put on some Bundesliga football, Hertha Berlin Vs Borussia Monchengladbach to be exact. This of course caused some complaint especially when members of the board came over from the VP lounge to complain, it was not known to Chalmers that changing the channel in the bar it changed the channel in the VP as well! And most of those in there wanted to watch Come Dancing.

We finally headed off to Sutton and the usual haunt of the Grapes to rest our weary bones. This is also were we met another associate of the Firm in Big Jim and the beer really did flow here and the topic of debate swung from what were the best websites to view for a bit of free porn and where was the place that a photo on my phone had been taken nearly a year before hand (It turned out that it was in the Grapes!). We also came up with some great ideas for our trip to Hemel on Saturday, but all will no doubt be reveal during the week. Finally the clock hit twelve when we all finally left to get ourselves home. It was on the walk up to the top that a certain member of the Firm (Not me for once) was questioned by the rozzers from their car much to the laughter of the rest of us.

And naturally at this point that I realised that I had left my phone in the pub. So I wished my fellow travellers farewell and headed back to the pub and then off to the bottom of Sutton to get the last bus home. That reminds me I’m still a DVD short to whom it concerns and I was not allowed to use a particular photo in my blog either.