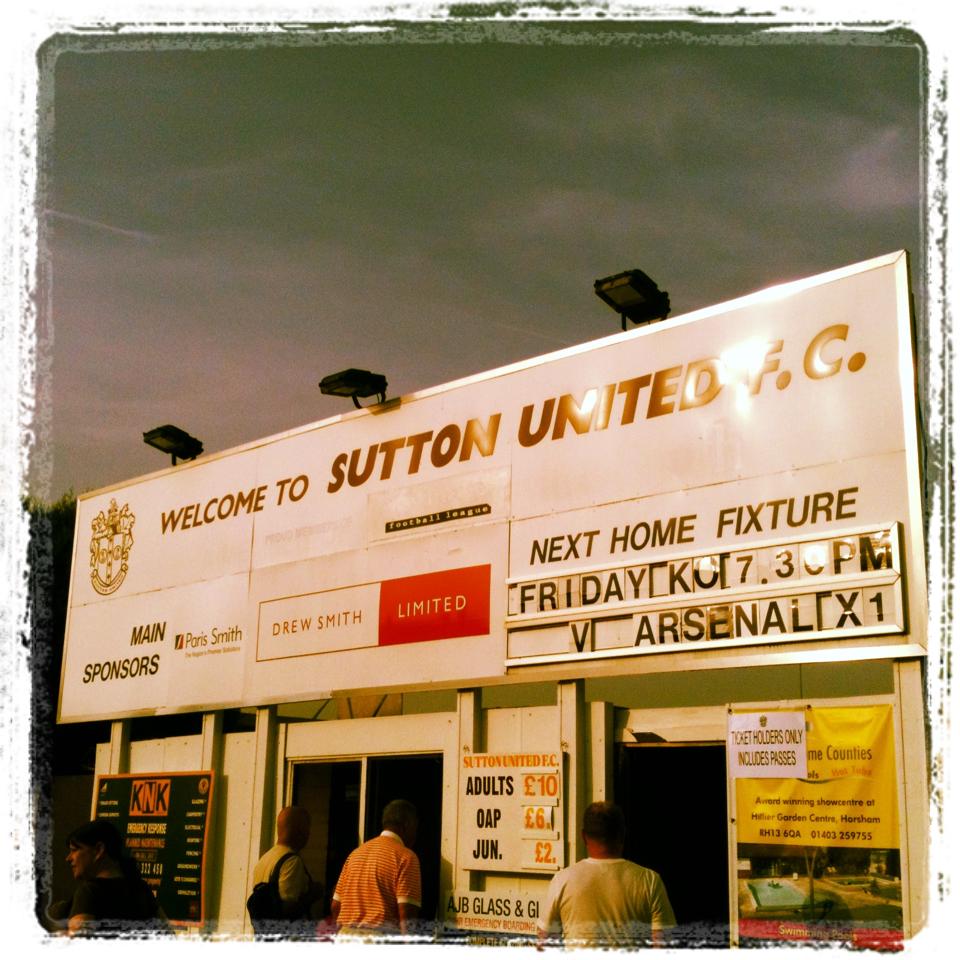 So it’s back. And well didn’t that come around quick! Seems like only
yesterday that the Season had finished. Say goodbye to your wives, girlfriends, families etc, it’s
time to reunite with the beautiful non-league game, oh and of course re-unite
with the beer!

So time to ditch the other football related content for now,
and turn our attention to the forthcoming Pre-Season Friendly’s. First up on
the Hit List was an Arsenal XI.  Now talk
of this game had been circulated around my Office, and after much persuasion and
damn right nagging and pleading, I managed to grab two of my work colleagues
down to the Lane for tonight game. The First being George, our Sales Manager,
and a massive Arsenal Fan, and the other being a chap called Ned, straight out of
Bosnia. (There seems to be a current theme, with me befriending Eastern
Europeans at the mo-don’t ask as to why) Now I’ll tell you a little more about
Ned, and his Football cousin a little later…. back to tonight.

A warm July Friday evening down at the Lane sees us
entertain none other than the possible future stars of Arsenal. With the on line
ticket sales reaching an all time high for a P.S.F, we couldn’t have asked for
a better night. Friday night, weather looking good, people a plenty, beer
flowing, and turnstiles spinning!

So, time to get down to some more serious  stuff
now!  As a number of fans are putting their
hard earned pennies down on a monthly basis, for the Strikers Are Key Scheme.
This would be the first opportunity for us to see what the two Jamie’s have
got!

So following on from watching the game, I’ll bring more of a
match summary, than a full report. Mainly cause me typing skills are somewhat
rusty, after the summer break, and I need to relocate my Gandermonium report
writing mojo thingy!….

Starting under way in the first half, at a high tempo, the
Arsenal XI setting the pace for this one early, within the first 5 minutes,
passing the ball with the sweetest of touches, really pleasing to watch. Its
been a while since I’ve seen this kind of pace, and movement- buy hey given
most of the Arsenal Squad are 18 and under, can’t be too surprised! So Marv
collecting up a loose ball, and running it down the right channel, but doesn’t
look up, when sending in his cross, and easily cleared away by the Arsenal ,
well marshalled back four! Arsenal taking possession in the middle of the park,
laying the ball past Dundo, leaving him on somewhat bemused as the centre
midfielder going past him with ease, and pushing the ball across to the right
channel, followed by a cross into the U’s box. U’s clearing away, and the loose
ball picked up, and a shot is fired over the bar by Arsenal, not troubling
Lovelock. Then the inevitable happens, one of U’s newly signed strikers goes
off injured.

Further possession and build up play from Arsenal, sees
Jamie Stuart pulled out of position on the left flank covering for Rents, sees
a lovely through ball down the right channel. Leaving Stuart standing in no-man’s
land with ground to make up. The Arsenal winger puts hits the turbo button and
steams down the right wing, swinging in a low cross across the box, and puts
them one up. Faux, comes on to replace the injured Jamie Taylor.

With Sutton losing a little bit of shape, and composure, and
struggling to get to grips with the Arsenal composure and hard pressing and
paced game. We concede a free kick about 10 yards or so from the edge of the
area. Sutton armed with a 5 man defensive wall, for added protection for
Lovelock. The young Arsenal lad, steps up, and strikes the cleanest of dead
balls, and swerves it over the top of the wall, and into the top left corner,
and even Lovelock at full stretch can’t seem to get a finger to it.

Another Summer signing, gives us a chance to have a closer
look at Dale Binns in action. I must say, I’ve seen him play against us on a
few occasions, and well it’s good to see him in a Sutton Shirt. I must say I’m
really pleased and impressed with this one. I can see Binns and Rents linking
up well on the left. Tonight I can confess, Binns has defiantly got some great
touches, awareness and ability, holding up the ball on the edge of the box.
Laying the ball of to Rents, allowing Rents to stick in one of his trademark
crosses into the box, but sadly cleared away to safety.

With Arsenal XI not holding back, again we concede by
allowing them to walk the ball from the outside of the box, tippy tappy style
of play, and a free shot going unchallenged into the bottom right hand corner
of Lovelocks net.

Heads still high, Sutton come back with further build up
play, again coming from Faux down the right channel. Faux clearly under orders
from the Gaffer to run that line, and box the ball. Faux turns in, to his left
and fires a shot from just outside the box, the Arsenal keeper reaches at full
stretch and palms the ball away at full stretch, and out for a Sutton Corner.
Rents steps up to deliver in a looping ball in the direction of U’s captain
Jamie Stuart, making his run from the edge of the box, and allowing himself
time and space, places his head onto the cross, and bosh Sutton have pulled one
back.

Dale Binns again doing what he clearly has been signed up
for; making trouble down the left , and with his step over’s and shoulder
dropping, and turning the Arsenal left back, he squeezes past his man, only for
his leg to be chopped, just outside the area, but the fella in BLACK, clearly exhausted
from the heat, fails to see it. Oh well never mind eh !

Further build up play for the Gooners down the right
channel, some neat one-two pass and movement, within a triangular formation,
from the edge of the area, pushing into the area, not allowing U’s to make the
challenge, and playing some sweet football from the young lads in red, sees
them again place the ball into the back of the onion bag.

With the second half well under way, a number of subs are
made. Allowing the gaffa to change things up a little, and look at the entire
squad, including players from the ressies, and a couple that he has bought in
to cover this game and the Fulham P.S.F. on Saturday afternoon.

Arsenal, also making a few changes themselves, somewhat
slows the attacking pace that they had in the first half down a few notches.
Sutton looking a little stronger and brighter that the 1st 45. We now
seem to be getting hold of the ball, and keeping possession better, and whilst
Arsenal are still looking strong, we are now begging to put together some
better pass and movement play, down the middle and to the right of the park.

Lovelock, is taken off, and is replaced by Wayne Shaw, and
well the Arsenal fans love our hero! I mean he is after all ‘fat and round’ but
he is worth a million pounds. Well we all know BIG Wayne loves a little banter
from the oppo!

Further breach of the Arsenal  not so solid looking back four, comes via a
cross coming in from the left allowing Slabber to place the ball in the
net-Quids in, already look , touch ! Apparently , according to the other members
of the shoebox, this goal will go down as assisted by Wayne Shaw!

Sinclair is rested up, and his work for the day is done, and
is replaced by Honeymoon from the Ressies! I can see that Honeymoon, has got
some potential in him. A good work rate for a young lad, and commits him-self
to almost everything.

With the some of the younger lads having a run out, so Dos
can have a butchers at the potential that James Bracken  is bringing through via the Ressies, and youth
development ( if I get time, once the Youth season kicks off, I’ll head up
Merland Rise, and I’ll bring you a write up on some of their games, after their
success last season ) Sutton continue to press hard, and push the tempo, not
allowing the Arsenal XI as much time and space on the ball, as seen in the
first 45. A cross comes in from the right , Faux I believe spins it into the
box, and Sutton pounce and place it top right hand corner of the onion
bag….and well that’s where it finishes tonight. Sutton-3 Arsenal XI 4.  Lots to take away from tonight’s game., and great to be back
watching the beautiful game again.

As mentioned at the beginning of my update. I was talking
about one of my work collegues Ned ‘The Bosnian Bullet’ well post match we were
having a chat about non-league football, as you do, and well Ned mentioned
that his cousin a chap called Zajko Zeba plays the beautiful game over in
Slovenia for NK Olimpija Ljubljana.  I came across his  Wikipedia page, worth a look, and even a
little read, you can find it here. http://en.wikipedia.org/wiki/Zajko_Zeba

So the reigns of Gandermonium are now handed back to the Duke for his forthcoming update on the Fulham PSF down at the lane this Saturday.

Don’t forget to keep up to date with the ongoing, updates, Instagram pics, and other bits we serve up by following us on Twitter @gandermonium.

Now heading off to meet the misses up in London for her Birthday weekend. Walking round London in this heat, it’s going to be a killer! That’s all from the one they call Casanova Juan!! (For those that were there..will know where this one comes from)