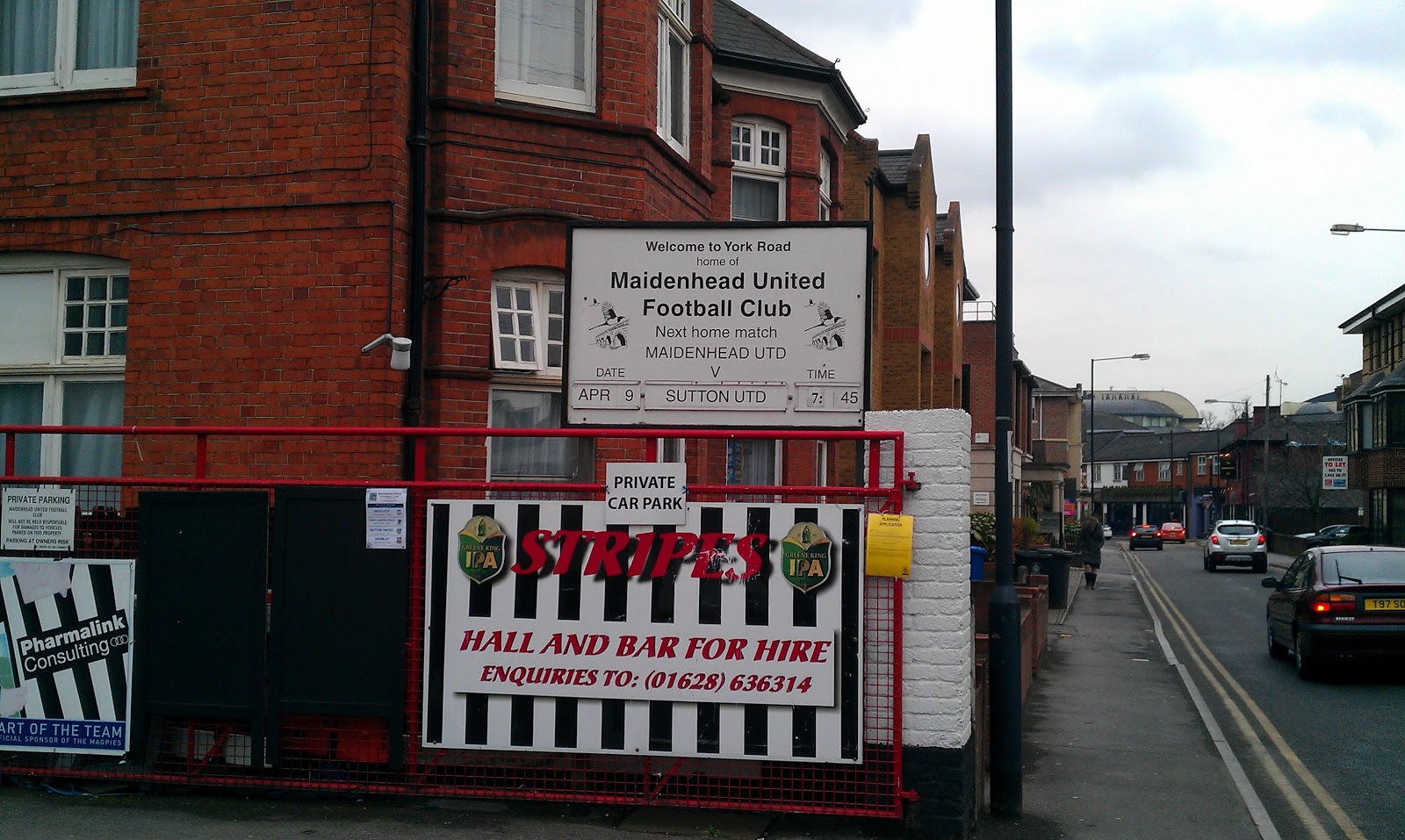 We’ve been here before…..This place seems familiar…..And I’m not even under the influence once again….

Evening fellow comrades, and welcome to another sobering affair from the Duke. Who’s turn it is to cover another night in Berkshire, Maidenhead were the opposition tonight, and not unlike other visits to York Road (minus the league cup game there a few years ago) there was very few goals to mention. Well there was only one, but we’ll get to that in due course.

A quick remark on Saturdays action: Now you know there is a saying, something like “never mix the grain with the grape” well I say that I didn’t break that rule. But instead I broke the rule that I have just create the “Don’t mix the grain with other types of grain then with various fruits like Apple, Lemon, Cranberry, Grape, Cherry, Strawberry and Raspberry to hide the fact your consuming large amounts of alcohol” rule. And that was supposed to be a quiet home game in the near end of the season*.

As is the custom on a Tuesday night away game, I had reserved my place in the hairdresser’s car for the travel over to Maidenhead. Unbeknown to me there was going to be a extra person travelling with us, a certain known QPR fan who had decided to tag along as he had nothing better to do. The journey itself to us around the M25 at a leisurely pace with us passing the time with classic car games like “spot the plane landing at Heathrow” and “How many people you can freak out in the car next to you” lasting quicker than we could decide on the rules to have any lasting or memorable effect.

Leaving Cheam at 1700hrs we arrived at Maidenhead around 1815hrs, and after parking in the usual car park, with the various locals unable to use the ticket machine I had to drop the shoulder and strut over and use my South London instincts to jump the queue and get a ticket. £1.50 it cost me I might add! It is also safe to say on our way to the boozer the views never change in some of the places we visit….

Now what seems to be the difference of this game being on a weekday compared to the weekend came into effect. You see if this game was on Saturday – even with being played or not – We tend to head up to the Bear. Weekday game we often end up in the other Spoons closer to the ground. The last time I went to this pub I managed to get mushroom juice all down my Sutton top. So I was damn right insistent I would go for the large mixed grill again and banish those demons that still persist. A meet with the Editor-in-chief was arranged and a couple of cheeky ciders were ordered. And no mushroom juice was spilled!

Unable to do the Billericay trick and walk through we were carolled in to paying to get in which wasn’t bad only a tenner (£10) to get in and our first look since December 2012 of the oldest senior football ground continuously used by the same club. nothing had changed and after the finding the right end we faced off with the Magpies.

I look back now and try to regale you with some interesting action from the first half, but I struggle to come up with anything of note. All the chance that Maidenhead had were all sort of half chances that never really challenged Lovelock in goal. Even at the other end nothing note really took place, just the frustrating action of a few out of the box shot that didn’t hit the target. I think Rent’s shot was the closest one with the keeper tipping an already off target shot over.

Now to that goal I was talking about earlier, if it wasn’t the softest goal I have seen, it has to be one of those penalties that is hardly ever given, no matter how many times you scream and shout. Dundo chases onto the ball into the box with the defender trying to guide the ball out of play at the the by-line. Dundo manages to get himself around the defender and keep the ball in play (it was not as Tony Adams would say “Over the Line!”). In order to prevent Dundo taking the ball, the defender sticks his arm out and clearly impedes Dundo. Penalty and a yellow card to boot. Dundo shakes himself down and steps up to smash the ball into the bottom right with the keeper (who wasn’t on his line) diving the wrong way. 1-0!

The second half was something more for us to talk about with there being no goals and a couple of stand out points the first being when the Maidenhead player (I think Tison-Lascaris) ended up being given the treatment by Downer in a robust but fair challenge and ended up being stretched off. The other action point was the “Is That Leroy” and “Serbonij” show were after some neat and tidy triangle one-two football managed to end up in front of goal with the keeper to beat and…. both decide not shoot! Also at last knockings, Sinclair got taken out by the keeper, no penalty or no booking for simulation! What the Fuck?

A mention on the Maidenhead fans that were part of the 261 people there, that could be the first time I have actually heard them sing and support their team, plus give us a bit of banter as well. And that my children is why some of us enjoy this game.

The ride home was even quicker than the trip West and we made it back within a hour, just enough time for me to jump into my set of wheel and begin to watch my forthcoming movie review “Zidane: A 21st Century Portrait”, five minutes after seeing the credits I fall asleep! That review is going to take a bit of time me thinks.

You do know Thursday see the return of the SSC, with a match against the Wombles down the Lane, this is the big one! Just one game away from a record breaking final (at GGL as well), and for just desserts there is going to be a Q&A with the guvnors on Monday, lets hope we win and I won’t have to vent my feelings of mild disappointment!

As the kids say TTFN! (even though it was first used in the war)

*Disclaimer: No Ray Charles impressions or toilet seats were used in the construction of this blog.