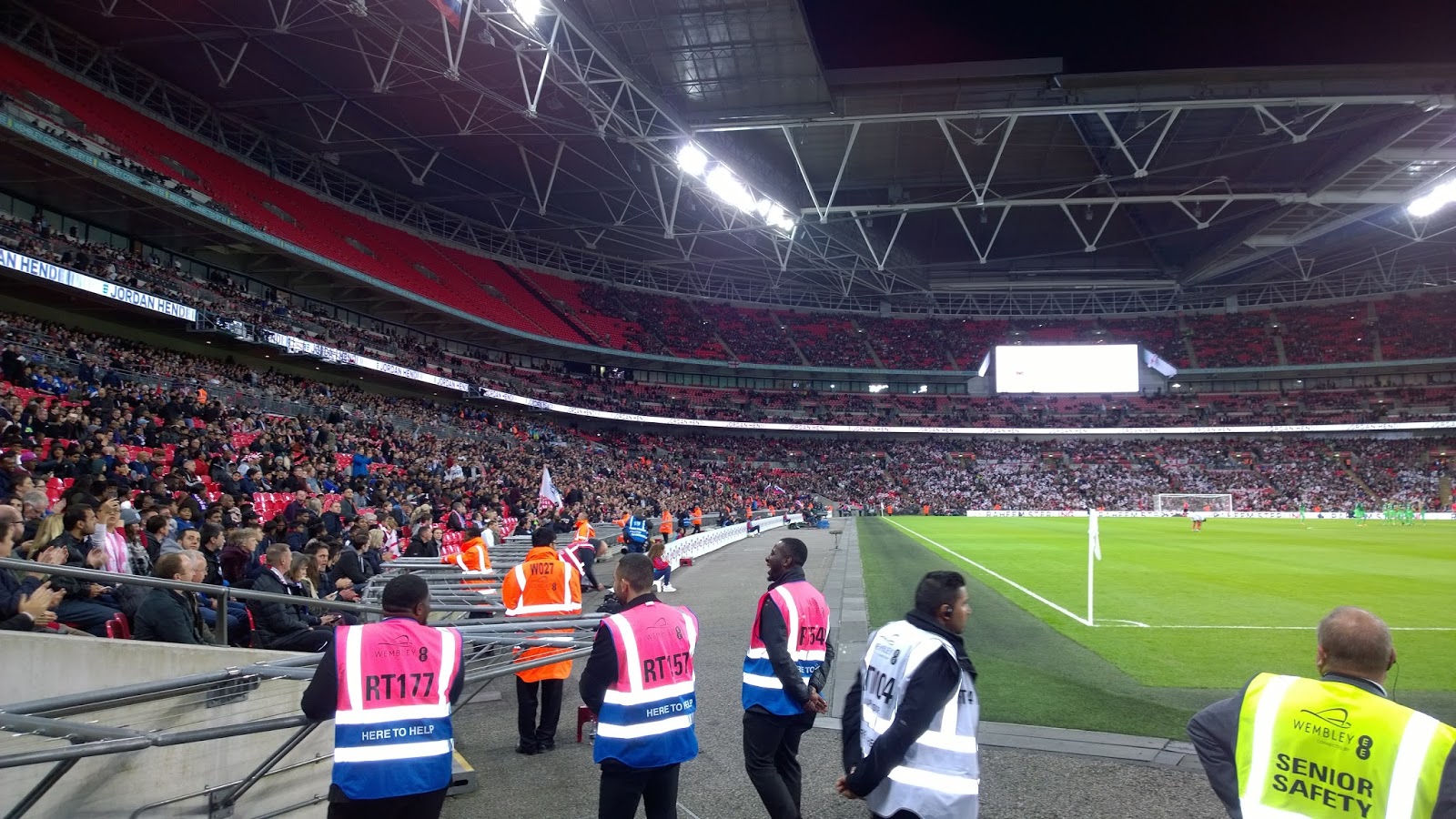 Sorry sports fans it is I, the Duke, here once again. Not wanting to wear out our beloved Chairman Totts of the People’s Republic of West Sutton, I’m back in the driving seat once again. And for this game it was the first ever visit to the KCS GGL for Kirkham & Wesham, sorry AFC Fylde, one of the youngest teams in this division.

Before we get on with today’s excitement, let us here at Gandermonium wish a happy birthday to a couple of the boys. First we have regular contributor Robbo who celebrated his so called “28th” birthday recently. I mean, what man would lie about their age? Really? Also it was Sutton’s answer to Sergey Gotsmanov (I’ve run out of 91-92 Southampton players), who is now also the wrong side of 35. So enjoy your late thirties lads, hope its better than your early thirties, and your twenties, and your teens…

I’m also not too sure I should be thanking Sutton’s answer to Sergey Gotsmanov though, because he did provide us with free tickets to go and see the shower of shite that is England on Thursday night. Can you also believe that it was my first visit to the new Wembley? The Euro 96 final was the last time that I’d bothered to darken the doors of the National stadium thanks to a combo of the Old Man and the Midland Bank.

Fuck me was it terrible. When the biggest cheer of the match comes when people were trying to throw paper fuckin’ aeroplanes onto the pitch off the top tier, you know where I’m coming from. We even left with ten minutes to go, like a lot of the other 60,000 there that night, so I missed out on the pitch invader, the goal & the ‘celebration’ of qualifying for the World Cup in The Soviet Union Russia next year.

I take it everyone saw the FA Cup draw on Monday? Paulton who? Originally I thought it was a aircraft (the Boulton Paul Defiant I was thinking of, of course!), but eventually found out it really is in the middle of nowhere. Their train station didn’t even last until Dr Beeching was out of short pants, let alone become an actual Doctor for gawds sake. And talking of trains, after booking ours from Paddington to Bath we then learn that there is emergency engineering works around Reading! Typical. As long as we don’t have to get a fuckin’ bus, that’s all I can say…

And what better way to highlight the trains issue then by there not being any trains from Carshalton this bleedin’ weekend. This meant that is was a bus journey instead for yours truly. Hopping onto the 151 into Sutton, I get to listen in on another example of the so called Youth of today. Two girls had sat adjacent to me and were talking the usual bullshit that two teenage lasses with too much war paint & clearly limited intelligence talk about.

This discussion was over the new £10 note. Luckily they did manage to work out that it was made with a different material, but they just couldn’t work out who the ‘new bird’ was on the back. More surprising was when the conversation then turned to the old tenner design that apparently didn’t in fact feature the famous naturalist Charles Darwin, oh no, but it in fact depicted the sixteenth president of the United States of America! Yep, that’s right, they thought it was none other than Abraham Lincoln on the back of our previous Cock & Hen.

Arriving later in Sutton than I’d expected, I head to the ‘Spoons for a couple of jars and meet up with BT Pete. I also encounter a random Newport fan and several other people that are interested in knowing where the fuck Fylde was as they couldn’t find it on any maps. Natually, I was only too happy to help. With the time fast approaching kick-off we make our way to the ground and inside just as the games starts.

Fylde kicked off the half as Sutton attacked the Rec End as usual. Once again it was another half that will soon be forgotten. There were a couple of chances at both ends with Butler being called into action to react to a hard hit shot from outside the box and Taylor nearly managed to nearly squeeze in a shot at the near post from a corner that came off the woodwork. Or was it the keeper?

As the clock fast approached half time, people started to make their way towards the bar. Needing to ‘Point Percy at the Porcelain’ I made my way to the new bogs by the main stand. Standing next to some fella I heard the shouts from outside, clearly the home support were unhappy with an incident. I was just about to remark on this to the fella when there is a clear cheer of a goal. Bollocks, missed it! So this is how Robbo feels?

Turns out that Lafayette was trying to get on to a through ball but was held up enough to get a free kick. Instead, the ball carried to a steaming Dundas who calmly slots the ball under the keeper into the net. 1-0! Coming out from the traps, I get the info for the goal and then immediately see another chance. This time Dundas heads the ball out to Taylor on the wing, he then winds it through several players before heading into the box and cutting the ball back. It fails to reach a Sutton player but one of the oppo manages to kindly slot the ball home instead. 2-0!

Heading into the bar at the actual break, we find Dr Bell who had been sent ahead to get the half-time round. Of course he’d missed both goals and the old fella needed help in explaining what had happened. Looking at some of the other results it seems that a win is needed as everyone around us is doing exactly the same. Still, at least the Scum & Ks were losing…

Second half and we take out usual spots on the Shoebox. Fylde make another change and Sutton once again pile on some pressure. The best chance in this spell saw John see his header loop off the top of the bar. Fylde also see one of their players sent off for two yellows inside a couple of minutes. The first was definitely a card but I wasn’t too sure about the second.

Dr Bell decides that he needs to go to piss, and like the first half misses some of the best action. Jeffery & Wright come on for Cadogan & Lafayette and link up with some good football in the box. First Jeffery takes it into the box and cuts it back to Wright who curls the ball towards goal only to see it slam into the far post and back into play. The same lad then hold it up and sets up Tommy in the box, but he scuffs it wide.

It wasn’t to be all one way traffic as slowly towards the end of the game, Sutton do the traditional Sutton thing of sitting deeper and deeper, inviting the 10-man opposition on. They finally got a break through when Dr Bell decides to grab a bacon roll, bit of a bundle in the box and it’s struck home by the fella who scored the own goal earlier. Minutes later they had a good chance to nick a point but Butler managed to earn his wages with a good save. Phew!

Full time and for once I don’t have to do my club duties as there is another match on the hallowed turf  straight afterwards today. But it is not just any match, it’s the prestigious “Tache Trophy” in honour of the legend that was John Rains. A bevvy of former stars grace the pitch that has the sad bastards hardcore that bothered to stay swapping the usual stories. Anyone else see the random bloke who claimed to work for Barclay’s? Pissed as arseholes he was!

One so called story was about Trowbridge. Don’t ask me how we got onto it as to be honest I was still distracted and frankly in awe of Dave Fairbrother’s vintage Hi-Tec tracksuit top. “It was in my wardrobe” was the only reply he’d give as to it’s origin. But back to Trowbridge. I never remembered us playing them, them but Taz was adamant that we’d only played them away once in a friendly.

Mr X pipes up that he remembered playing them at home once, rubbish calls Taz, then Dr Bell contributes for once in his life something constructive in that it was definitely in a cup/trophy match at home from the mid-nineties and that we lost. Of course these days, you don’t get the old skool all night argument that is only answered the following week if someone remembers to find out like you used to. Na, these days its a quick Google on Yahoo and every one knows the answer. Which I’ve forgotten already…

Having somehow avoided losing 5p to Mr X over this pointless debate, Taz does the off before the end and then heading back into the bar we get to chat to some of the old boys. It’s still surprising that some of them haven’t changed a bit. I’m looking at you Patsy! Matty Fowler regales us with some of his little stories including how much the players were on back then. We even managed to grab Nko Ekoku for a quick chin wag and asking him to describe what he thought of Joe Ross after all these years, he gives us the one worded reply that we all know & love. Yeah that’s right, berk! How did you guess?? Were you earwigging?

Trying to save one or two pennies for some of the upcoming awaydays, we all eventually call it a night and head off our separate ways. Mr X fancying a bit of Mr Chow, the food, not the man, Dr Bell is heading back to the Walter Pigeon Club courtesy of Alan the Cab and I decide to walk through dog-shit alley in the search of sustenance in the high street that I somehow fail to get, having managed to miss all the usual places you’d get nosh from. What a plonker!

So we now move onto the start of another FA Cup campaign against the grand grabbers. We still don’t know really where it is, we don’t have a proper plan of how to get there, but we’re still aiming for an eleven o’clock start on the drink. Gonna be another cracker then!

Until then, keep it clean and keep it legal. Or just don’t get caught…