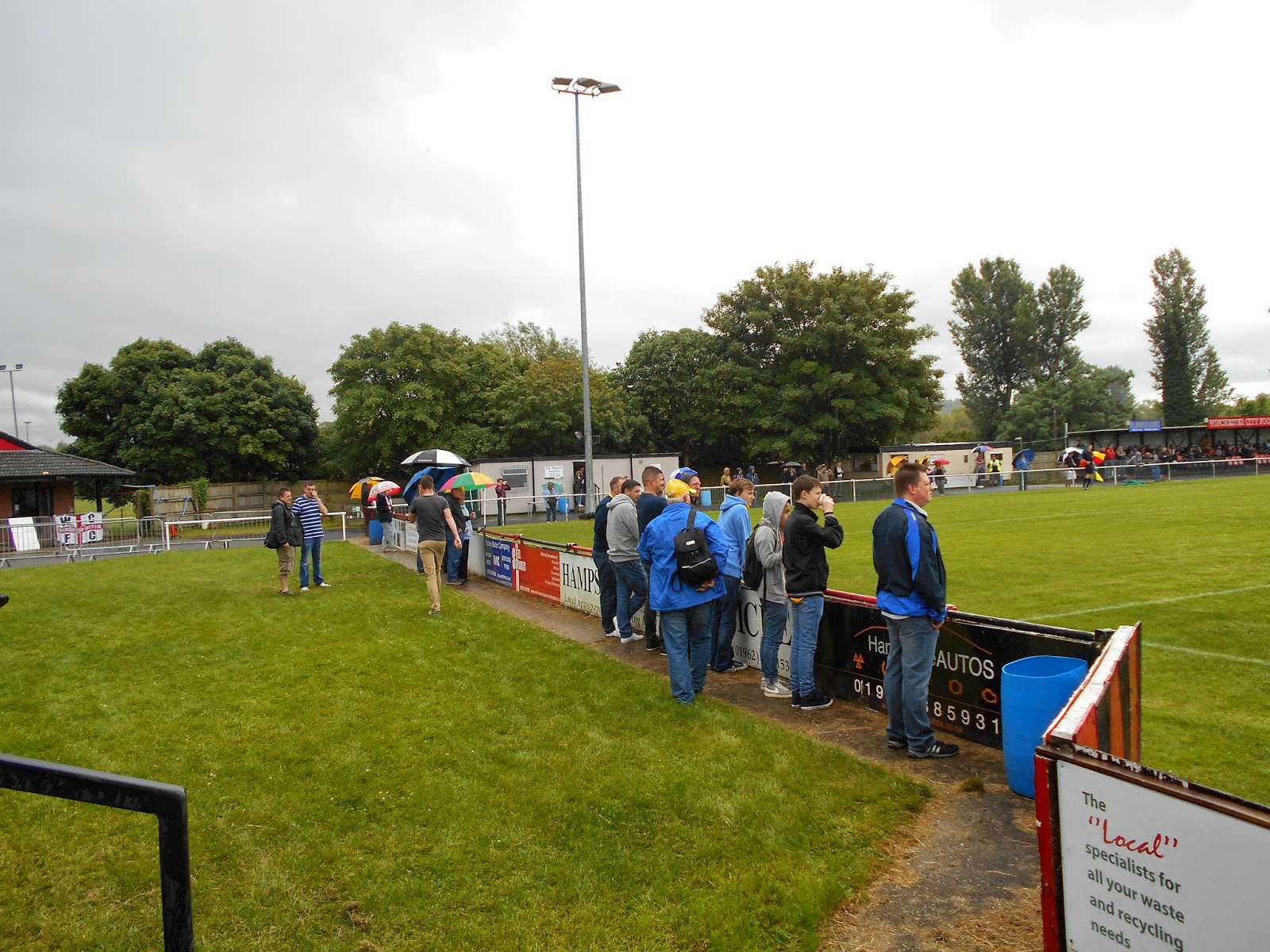 Fuck me we are back again!

And like a bad dose of the clap we’ve returned leaner, meaner and damn right more thirsty for action & alcohol. The first trip of the 2014/15 was to be a little adventure to Hampshire to take on Our Lord Dos’ local team Winchester City who play in the Wessex league.

But let’s first wind the clock back twenty four hours to look at the day that we saw the announcement of our forthcoming league fixtures. And as like previous years the conference seem to strive to prevent us from having some crackin’ booze cruises. Whitehawk & Hemel away midweek and Weston on a Sunday to name but a few.

Still at least we get to see a local derby at Christmas with our closest rivals Bromley. Oh wait the Conference have fucked that one up as well and instead we have been given Wealdstone. I still don’t know why we have to wait an extra three weeks for our fixtures just to get our requests denied. But the all knowing Conference clearly see the bigger picture and considering the way in which it dealt with the Salisbury problem it….. Oh wait……

Anyway, back onto our most recent booze cruise.

With Taz celebrating his 40th birthday, Viking River Cruises style, it was down to Mr X & The Firm Leader to decide on a plan of attack for Hampshire. Via numerous pigeon messages the news arrived that we were going to get the 1027 from Clapham. This meant that the 0932 from Carshalton was the train to get and it was here that me, Taz and the Firm Leader met. 4 Days and Dr Bell were on the train and we all headed up to Clapham with many questions about the forthcoming season being exchanged.

At the station we were met by the CEO of CES and Mr X and after spending nearly a score on a train ticket we were forced onto the carriage to all stand around the toilets like a bunch of perverts. But to be honest most of us are! A changeover at Basingrad with too little time to even sneak in a cheeky short at the Queens Head, which was needed as we rolled into Winchester well after eleven.

The first Pub was of course one for the purist as it was a Wetherspoons. The Old Gaol was like other ‘spoons and with a disgruntled Firm Leader making a poor choice of cider I plumbed for the Rattler. In this pub we decided on what pubs we were going to visit. The next choice was going to be the Westgate Hotel which was were we met the Aleman. Another cider down we headed off to another boozer across town.

The route took us across through the throngs of people that surrounded the cathedral with various acts going on. After a quick stop at The Wykeham Arms and the beginning of buying the birthday boy a shot we headed to the best pub of the day called the Black Boy. It was here that we found all manor of crazy shit stuck to the wall and even a table football device was station next to us as 4 Days and the Firm Leader quickly established there dominance over it.

The first fuck around was when the cab arrived too early and then pissed off after we told him to wait. eventually another taxi arrived and we high tailed to the ground. With the game already kicked off we paid our £6 and headed behind the goal. The starting line-up for today was:-

With the weather unable to make its mind up, it was us that made the better start. I don’t really remember much of the first half because after seeing everyone else with food I decided to head over to the shack for some tucker. As soon as I entered the place I saw there wasn’t a lot of activity because apparently all they had left was one sausage and some lukewarm chips (plus no bloody gravy!).

For some reason I decided to stay in the shack and eat my chips, the only problem with this view was I wasn’t able to see our goal area. This back fired when we went one nil down. After speaking to a few who saw the goal reckon it was a bit of a defensive mix up that lead to a simply tap in at the back post. The best chance for us came when one of the newbies Wellard saw his shot come off the post.

The second half saw me take root in the little cordoned off area outside the bar where I could drink and smoke to my hearts content. Once again this view was slightly blocked by a man and his umbrella and the bloody floodlight. There was a whole host of changes at half time that saw a different Sutton team raise the standard of the match that Winchester couldn’t reach.

Getting another beer had me miss the first goal as all I saw past the floodlight was Marvin trotting away and the Sutton fans behind the goal celebrating. 1-1! The second goal I actually saw when a low cross from Marvin saw Jessy try and volley the ball only to hit the ball just before his arse hit the floor. 2-1! By now the boys were all over them and this showed when Marvin jumped on to a blocked shot to rifle the ball into the back of the net 3-1!

Winchester had their best chance after this with a long shot that was tipped over by Lovelock in goal. If the match wasn’t over as a game by now it was after a corner was knocked into the back of the net by one of the defenders after some pressure from Dundo 4-1! There was still time for the keeper to bring down Marvin in the box. How the ref didn’t send him off for it I don’t know. The resulting kick from Lockwood was dispatched without any effort. 5-1! I still remember having Lockwood in my FIFA 2004 team playing alongside Downer.

After the final whistle we all headed into the clubhouse to watch the Argentina vs Belgium game. Dr Bell had suggested that a famous song by Men at Work could be rephrased for our new fella upfront but we’re still working on it. It was either that or the Firm Leader’s suggestion of a Toni Basil song remix. Also it was my turn to get the birthday boy a shot of fire water. But what was I going to get the old git? Well after trying to remember what he had already stuck down his throat I made the decision to go for the old favourite a Tequila Slammer. Unfortunately after asking the attractive woman behind the jump for the various items needed, she informed me that there were no lemons about and I decided for some lime cordial instead, surprisingly the stuff didn’t taste that bad.

Taxis booked to take us back to the station we just had enough time to get some stock for the train at a local co-op. Arriving back in Clapham we headed towards “The Junction” and to watch the Dutch game on the big screen. We also met two fellas from Uganda that got Mr X’s juices flowing with his tales of travelling when he was much younger. It was a shame that he failed to try and impersonate them as that is always a giggle with his attempt at communications with folk not of these isles.

Above our heads were the flags of each of the nations in the World Cup. I was told that there was one missing and after much soul searching I plumped for Switzerland. I was then informed that in fact there was two flags missing as no one else had noticed the Nazi gold hoarder’s flag wasn’t there! After watching the penalty shoot out we realised that we had missed the last train to Carshalton. So what were we to do?

Carry on drinking into the night. Unfortunately lady luck was no to be with us as our trip to the world cup bar was cut short in the fact that the place was shut. After a free and fair vote we decided to call it a night and grab some food. Some of the party headed for some cheap cardboard McDonald’s. I on the other hand decided to go for a bit of the old ethnic foods (kebab!). I did also manage to witness a little bromance as four young fellas in their tight jeans and Ben Sherman shirt have a group hug as they rolled around on the floor.

The only train home was the long way around train to Sutton and as Saturday turned to Sunday the effects of the day were beginning to take hold. So much so that one of our party for some reason decided to get off at West Croydon without telling no one. I didn’t expect to wait for half and hour with the Firm Leader and some hobo at Wallington for a cab but needs must.

So this Saturday its the Chelsea Under 21s down at the Lane. You never know Juan might even make an appearance for it, if he doesn’t have thing to do mind you. Hopefully the weather will be with us and a bumper crowd will be in attendance. Not too many though, I do like to be able to get to the bar once in a while.